It’s not enough to fine big pharma for the opioid crisis. We need systemic solutions, too. 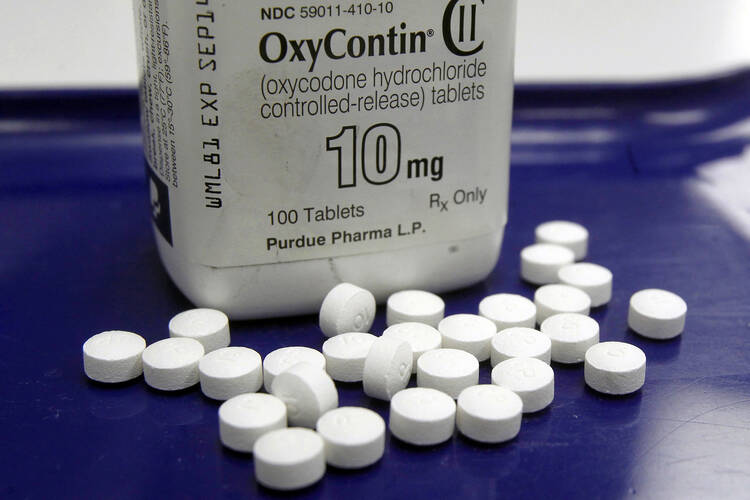 Earlier this week, state District Court Judge Thad Balkman of Oklahoma ordered Johnson & Johnson to pay a $572 million fine for violating the state’s “public nuisance” laws, blaming the corporation for thousands of deaths from opioid addiction and drug overdoses. A few days later, Purdue Pharma was reported to be considering a multibillion-dollar settlement to resolve thousands of state and local lawsuits that similarly seek to hold the company accountable for its role in the opioid epidemic.

During what is still a crisis, these events begin to redress an injustice. Overdoses cause immeasurable pain and suffering in families and communities, addiction is expensive to treat, and the lost economic output from incapacitated workers can be enormous. While heroin and fentanyl have displaced prescription opioids as the primary culprits in overdoses, corporations should be held responsible for introducing highly addictive drugs into the health care market in the 1990s and 2000s and then aggressively advertising them without sufficient regard to their negative effects. But the imposition of the fine in Oklahoma also presents an invitation to reflect on the broken structures of American society that led to the current situation.

While the money awarded will provide some relief to communities still reeling from the deadliest drug crisis in American history, liability and public nuisance litigation for the half a million lives already lost is not enough. Part of the reason the Oklahoma case and Purdue settlement have attracted such attention is that they seem to be the only progress being made while many government leaders have failed to take action to curb the crisis.

The opioid crisis developed not just because of corporate action and misconduct but also because we treat health care in this country as a consumer good.

The United States has historical models for responding to public health crises. In 1990, in a belated response to the H.I.V./AIDS epidemic, Congress approved billions in funding to support people with AIDS. Although a bipartisan bill containing several measures to address the abuse of opioids passed Congress last year, it fell far short of the spending necessary to respond to the present public health emergency of opioid addiction. Resolving questions of pharmaceutical companies’ liability through the judicial system is necessary, but it cannot replace a broader systemic remedy.

The war on drugs is another example of the United States relying on the courts to deal with a public health crisis—in this case, the criminal courts. Attempting to punish our way out of a drug epidemic did not succeed in fixing the problem, and the costs of that failure were disproportionately borne by black Americans. To their credit, Congress and President Trump finally made the first moves toward making some amends with last year’s criminal justice reform bill.

Similarly, broad policy fixes are needed to address the opioid crisis. In addition to providing funding to help the communities most immediately affected, Congress should examine the legal and economic incentives that contributed to the overprescription of painkillers. The opioid crisis developed not just because of corporate action and misconduct but also because we treat health care in this country as a consumer good rather than as an essential part of the common good.

The Johnson & Johnson case provides further evidence of the fundamental problem with a health care system that functions as if it were just another commercial market. From 2000 to 2011, Johnson & Johnson made over 150,000 sales visits to doctors in Oklahoma. The judge ruled that their marketing campaigns misled both doctors and patients about the addictiveness of opioids. Johnson & Johnson also vertically integrated their opioid supply chain, with two subsidiaries responsible for manufacturing most of the active ingredients used in all opioids sold in the United States. In an effort to increase sales, Johnson & Johnson worked with consulting agencies to explore questions like “Are certain physician specialties more or less likely to prescribe long-acting opioids?” and “Can we influence flows to take advantage of this difference?”

As the nation mourns its dead, heals its sick and holds responsible parties accountable, a more holistic examination of our ideologies and dysfunctions is still needed. Payouts and settlements from pharma are a poor substitute for solving the systemic issues plaguing the body politic.

This is indeed a crisis. Just what are the “systemic issues plaguing our society” that you suggest need resolving?

I have the same question Lloyd.
I think it is unfortunate that problem of addiction is not addressed. I think the fundamental problem is that some people have addictive personalities. And they use opioids as a substitute for prayer and a relationship with God.
We know that when a human is in pain, the opioids, even at high doses are not addictive. For some reason the brain needs the pain to stop in order to heal the body. Opioids filled a strong need for prescription pain medications for the pain to be controlled for bodies to heal. And for those people opioids are not addictive.
I hope these multimillions of dollars in judicial fines are used for research into addictive personalities, and how important pain management is to the healing process.

Katherin, I agree that much more study into addiction is needed. Somehow I believe the physical aspects of addition may be due in part to the chemistry of our individual bodies. That is why some people can drink alcohol without becoming addicted while others are hooked rather quickly. I believe there is also a personality aspect as well. That is the reason why some people exposed to peer pressure at a young age can reject experimenting with drugs while others cannot.

A Fielder
2 years 11 months ago

"We know that when a human is in pain, the opioids, even at high doses are not addictive."

Katherine, this is absolutely not true. Many good people were prescribed this "medication" by doctors, who were being feed this falsehood from big pharma. Addiction can and does happen, and quickly.

Here is an idea, what about one of your magnificent courts ruling that being in pain is now not legal, there will be no pain to treat legitimately and so manufacture and supply of pain management drugs can be outlawed?

Another flaw in human nature fixed by the infallible and omnipotent power of the American legal system.

This issue is going to result in a class action settlement fund that has PhARMA and distributors kick in and states getting funds in proportion to the damaged cause. I doubt addicts will see a dime in some states. They will do to this what they did with the tobacco settlement, use it as a slush fund.

For addicts, we need tax funded mandatory long term treatment rather than jail for addicts and the mentally ill. Relapse must result in immediate rehospitalization. Services should be spread around to private hospitals (states should at least make it look like they get money - state hospitals, like jails, are under funded). Catholic Health Association members should take the lead on this, redoubling their efforts to treat alcoholics, addicts and the mentally ill until they are doing well on their meds rather than simply stable. If this sounds expensive, it is because it is. An employer paid value added tax should fund it at money machine levels. It will still be cheaper than incarceration.

A Fielder
2 years 11 months ago

"...many government leaders have failed to take action to curb the crisis."

This is an understatement. I would like to see the editors advocate for a public corruption case. Some governments leaders were actively supporting deregulation, and trying to bury legal cases against offending parties.