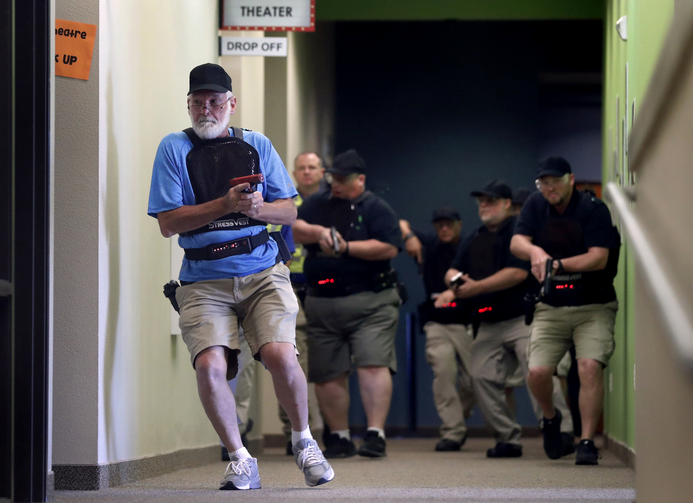 Stephen Hatherley, left, leads fellow trainees down a hallway as they participate in a simulated gun fight scenario at Fellowship of the Parks campus in Haslet, Texas. (AP Photo/Tony Gutierrez)

Seven men wearing heavy vests and carrying pistols loaded with blanks ran toward the sound of the shots, stopping at the end of a long hallway. As one peeked into the foyer, the "bad guy" raised the muzzle of an AR-15, took aim and squeezed the trigger.

The simulated gunfight at the church in Haslet was part of a niche industry that trains civilians to protect their churches using the techniques and equipment of law enforcement. Rather than a bullet, the rifle fired a laser that hit Stephen Hatherley's vest — triggering an electric shock the 60-year-old Navy veteran later described as a "tingle."

The shootings this month killed more than 30 people at an El Paso Walmart and Dayton, Ohioentertainment district. But gunmen have also targeted houses of worships in recent years, includinga church in rural Sutherland Springs, Texas, where more than two dozen people were shot dead in 2017.

The anxiety of one mass shooting after another has led some churches to start training and arming their worshippers with guns. Not all security experts support this approach, but it has gained momentum as congregations across the country grapple with how to secure spaces where welcoming strangers is a religious practice.

"Ten years ago, this industry was not a thing," said David Riggall, a Texas police officer whose company trains churchgoers to volunteer as security guards. "I mean, sanctuary means a safe place."

In 1993, Doug Walker said security wasn't at the fore of his mind when, as a recent Baptist seminary graduate, he founded Fellowship of the Parks church in Fort Worth. But six years later, after a gunman killed seven people and took his own life at another church in the Texas city, the pastor said his thinking changed.

Today, the interdenominational church has four campuses and 3,000 worshippers on an average Sunday, Walker said. It has increased security as it has grown, asking off-duty police to carry weapons at church events. And it recently hired Riggall's company, Sheepdog Defense Group, to train volunteers in first aid, threat assessment, de-escalation techniques, using a gun and tactical skills, such as clearing rooms during an active shooting.

Walker, 51, said there wasn't a single event that prompted his church to decide its guards needed more training. But Riggall said that after mass shootings congregations reach out.

"Every time the news comes on and there's another shooting in a school or church or something like that, the phone starts ringing," Riggall said.

The 46-year-old police officer said that he and a colleague had the idea for the company after the 2012 mass shooting at an elementary school in Newtown, Connecticut. They started doing firearms trainings with parents and, after Riggall became certified under Texas law to train security guards, transitioned to churches.

The company incorporates Christian teachings into its courses and more than 90 people at 18 churches have completed the 70 hours of initial training and become state-licensed guards through its program, Riggall said. The so-called sheepdogs are insured and technically employed by the company. But they volunteer doing security at their own churches, which in turn pay Riggall.

On a Sunday in July, Brett Faulkner stood with an AR-15 in hand and his back to the cross in the sanctuary of Fellowship of the Parks campus in Haslet, a community about 15 miles (24 kilometers) north of Fort Worth. He pointed the rifle at a young woman's back and yelled at the armed men advancing into the room, "I'm going to kill this woman. It's going to happen right now."

Faulkner, a 46-year-old information technology worker, already completed a Sheepdog session but came to another church's to play the bad guy and keep his skills sharp.

"It really just comes down to caring about the people in that building," Faulkner said of choosing to guard his small Baptist church.

Faulkner said his congregation re-evaluated its security after recent mass shootings and went with Riggall's company as a cost-effective option. "This is a good balance between the cost of paying professionals and relying on untrained volunteers," he said.

Security professionals differ on what balance is right.

After 11 worshippers were shot dead during Shabbat morning services at a synagogue in Pittsburgh, the city's Jewish community has added layers of defenses.

Since that October attack, congregations that once felt guns were unnecessary or inappropriate have welcomed armed security, said Brad Orsini, security director for The Jewish Federation of Greater Pittsburgh. But arming worshippers is not an approach the former FBI agent recommends.

"Carrying a firearm is an awesome responsibility," said Orsini, who served in the Marine Corps before his nearly three decades with the FBI. "Because you have the ability to have a carry concealed permit does not make you a security expert. Because you have a firearm doesn't necessarily mean you should be carrying it at the church on the weekend."

But, he said, many of the roughly 40 Alabama churches that have sent people to take the class are small, rural congregations with limited means. For them, having armed volunteers can feel like the only option, he said.

And the trainings provide churches with evidence of having a security program in place if a tragedy turns into litigation. "It gives a good record for something that will hold up in court," Youngstrom said.

Laws about carrying firearms in houses of worship vary from state to state. But as a general matter of liability, churches training members for security is not much different from a business hiring guards, according to Eugene Volokh, a professor at the UCLA School of Law.

A church could be sued if people were harmed because its security was badly trained, Volokh said, but also if it generally failed to protect people on its grounds. Both can be insured against and either is unlikely, he said.

We asked our readers if El Paso and Dayton were mentioned at Mass on Sunday. Here’s what they said.
Our readers

Brian Higgins, a former police chief for Bergen County, New Jersey, and instructor at John Jay College of Criminal Justice, said he's seen varied approaches to firearms in his work consulting at houses of worship. Attitudes toward guns differ between urban and rural areas, as do the security needs, he said.

Fellowship of the Parks allows congregants to have concealed weapons in church. But Walker, the pastor, said that other than security, people carrying openly are asked to put their guns away or leave.

"If people open carry who are not uniformed that can be very unsettling," Walker said. "You may not know if that person is a possible shooter or criminal, so we try to balance it."

"Put your sword back in its place," Jesus said to him, "for all who draw the sword will die by the sword.

Maybe we have already died if we are responding in this manner. This will not end well. May the Lord watch over His flock.