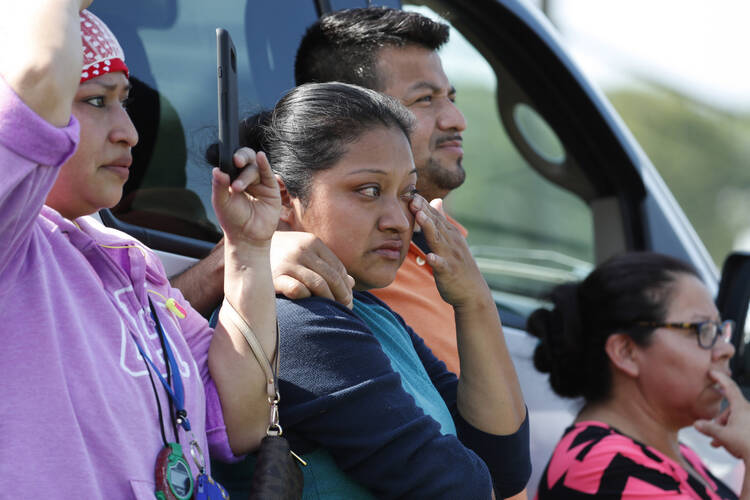 Likening the use of about 600 federal agents in an immigration raid carried out Wednesday in seven Mississippi chicken processing plants to an “invasion,” Bishop Joseph Kopacz, who heads the Diocese of Jackson, said some of the families affected by the action appear “traumatized.” And though about 300 of the roughly 680 people who were arrested were released on Thursday, Aug. 8, the bishop said the effects of the raids will only intensify in the coming weeks.

“This is a man-made disaster—literally,” Bishop Kopacz said. “These folks are our neighbors. They’re not criminals, the vast majority of them. They’re hard-working people.” He said he was bewildered that authorities would choose to carry out the operation as these Mississippi communities began the first day of school.

The bishop, who also heads the local Catholic Charities agency, said that families who have lost jobs or breadwinners will face increasing financial hardships in the near term, as bills come due and refrigerators go empty. The diocese plans to work with parishes in the affected communities, home to large Guatemalan and Mexican populations, to get a sense of the need on the ground.

“It really took everyone by surprise, the extent of this,” the bishop said.

Bishop Kopacz said the diocese will collect donations over the coming days and then work with local parishes to distribute funds as families face difficulty paying rent or buying groceries. He is also working on a statement with other local Catholic leaders and the heads of the Episcopal and Methodist churches.

“This is a man-made disaster—literally,” Bishop Kopacz said. “These folks are our neighbors. They’re not criminals.”

The near-term hardship “won’t hit for a week or two,” Bishop Kopacz said. But “as time goes on this month, there’s going to be some real crises.”

The raids occurred at facilities owned and operated by Illinois-based Koch Foods, one of the largest poultry producers in the United States, with operations in Mississippi and five other states. The company did not respond to telephone calls and emails seeking comment on the ICE raids or their impact.

Chicken plants dominate the economies of Morton and other small towns east of Jackson. Mississippi is the nation’s fifth-largest producer of chicken products, and the plants’ tough processing jobs have mainly been filled by Latino immigrants eager to take whatever work they can get.

“There’s not a waiting list for these jobs,” Bishop Kopacz said. “These folks are contributing to the economy and to their families.”

Perry Perkins, the Mississippi supervisor for the Industrial Areas Foundation, said the response to the workers’ and parents’ plight thus far has been chaotic, with “all kinds of groups” providing legal support and counseling for parents and children. “Folks have been released with court dates, but now they don’t have jobs,” he said. “It’s a mess.”

Chevon Chatman, who heads up Working Together Jackson, a network of community groups including Mississippi parishes, said service agencies are “still figuring things out.”

“The needs were different yesterday,” she said.

“The kids who were left behind on their first day of school came back to no one,” she said. “There have been some reunifications, but it’s still a work in progress. There are a significant number of children who have not been united with their parents.”

Ms. Chatman said that many companies in Mississippi count on immigrant labor, adding there may be ways to build an agreement to prevent future raids on that need.

“In my work, I see how [immigrants] want to make better lives for themselves and the people around them,” she said, adding, “prayers are welcome. That’s always.”

Patricia Ice, a lawyer with the Mississippi Immigrant Rights Alliance, said immigrant community members are “afraid to go out of the house.”

“We would like for the raids and detentions to stop, and we need Congress to work on a path to permanent residence and citizenship,” she said. “These are people who are working and contributing to our society. They are our neighbors. They go to church with us. They are people in our community that we love and cherish.”

Ms. Ice noted in particular her clients who are recipients of Deferred Action for Childhood Arrivals, an Obama administration policy that protects undocumented immigrants who arrived to the United States as minors from deportation. Some work in technical support, others serve as nurses, and one is studying to be a veterinarian. Immigrants are an asset to Mississippi’s struggling economy, she said.

“We don’t need to run them away,” Ms. Ice said. “Mississippi needs workers.”

Matthew Albence, ICE’s acting director, told The Associated Press on Aug. 7 in Pearl, Miss., just down the road from a Koch processing plant, that the raids could be the largest-ever workplace operation in any single state. The companies involved could be charged with knowingly hiring workers who are in the United States illegally and they will be scrutinized for tax, document and wage fraud, Mr. Albence said.

The raids were carried out on the same day that President Trump visited El Paso, Tex., where a gunman, who appears to have targeted Hispanic people, killed at 22 people over the weekend. At least one Catholic bishop found the timing to be especially insensitive.

“While the nation is still in mourning, especially the vulnerable immigrant population, ICE separates more families with massive raid,” Bishop John Stowe of Lexington, Ky., posted on Twitter, adding, “the cruelty must stop!”

Chicago-based Catholic Extension announced on Aug. 8 that it would also send aid and begin a fundraising effort to assist families affected by the ICE raids through its “Holy Family Fund.”

The Rev. Jack Wall, president of Catholic Extension, said in a statement on Aug. 8 that separated families, like the ones in Mississippi, are “the human toll of our broken immigration system; suffering amid our nation’s inability to find a common-sense legislative solution to this pressing issue.”

Here we go again. Opinions from any Catholic person or organization who stands to make money off of illegal immigration has really gotten old. Our nation, as all others, has laws regulating immigration already on the books. People who break and enter, then work illegally, often stealing the identities of citizens, know full well that they can be deported. People who break laws are always separated from their children. The 'breaking up families' condemnation is ridiculous. When the parent(s) are in jail the children can be cared for by relatives or our foster system. If the parent(s) are deported take the whole family back home and raise your own children. The risk or arrest and/or deportation must be worth it to the millions who come here to work.

Children who are separated from their parents suffer lasting trauma from the experience. Relatives or the foster system are absolutely no substitutes for a mother or father. This is my opinion, based in fact, and I certainly do not stand to make any money off it. Yes, the possibility of arrest and deportation is worth it to many of our brothers and sisters because the alternative, staying in their home country, is so much worse. God help all of them and open the hearts of those who cannot love them

John B
3 years 3 months ago

Indeed, our nation has laws. The billionaire who owns the factory also broke our laws, but he wasn't arrested. Do you think he should be separated from his family? Why don't you complain about him breaking our laws? What's getting old is casual cruelty directed at vulnerable people while powerful people get a pass.

You have no evidence that any of these people stole anyone's identity. In fact, you have enjoyed the low prices for agricultural products that these workers have made possible for you. So there is plenty of blame to share, if you want to point fingers.

I second the prayer expressed in Fran Abbott's closing sentence, and hope that the federal employees whose duty it is to perform these acts will be treated with sympathy by their grandchildren.