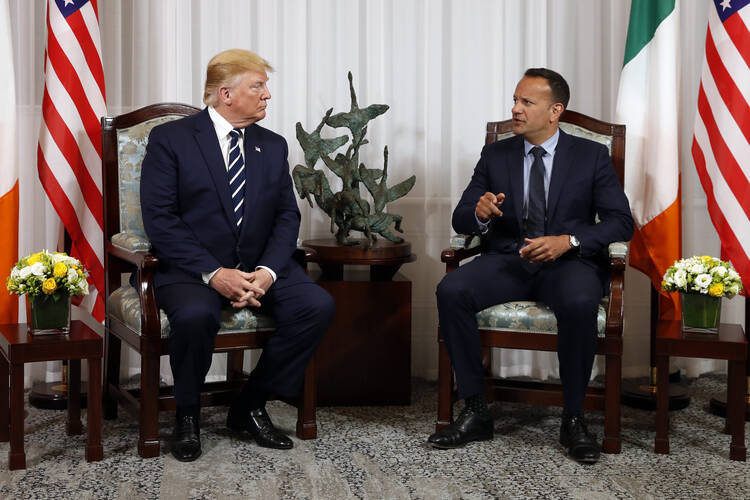 U.S. President Donald Trump meets with Irish Prime Minister Leo Varadkar on June 5 in Shannon, Ireland. Mr. Varadkar had pledged that Ireland would be a leader in responding to climate change, but it is not necessarily doing any better than the United States is. (AP Photo/Alex Brandon)

In May, Ireland became only the second country in the world to declare a “climate and biodiversity emergency.” A month later, Minister for Climate Action Richard Bruton announced a wide-ranging Climate Action Plan outlining a path to net-zero emissions by 2050 and the restoration of habitats that can absorb carbon dioxide from the atmosphere. Irish climate activists, who had been buoyed by Green Party gains in this spring’s European Parliament election, were warily optimistic. It appeared as if the teenagers who had followed Greta Thunberg in school walkouts, or “climate change strikes,” had scored a sudden success. Ireland seemed to be fulfilling the pledge by Leo Varadkar, the nation’s taoiseach (the equivalent of a prime minister), to become a leader on climate change.

But by July 4, that optimism was dead. So was the Climate Emergency Measures Bill that represented concrete action to address the crisis. This legislation included a moratorium on gas and oil exploration in Irish coastal waters, which would make Ireland only the fifth state in the world to keep its fossil fuels in the ground.

The declaration of a climate emergency may have been a clumsy attempt to “greenwash” the issuing of further exploration licenses to multinational oil and gas companies.

An arcane procedural mechanism called a “money message,” which had rarely been used in the past 50 years of Irish lawmaking, was unearthed and utilized by the current coalition government to sink the bill. A money message requires the taoiseach to sign off on any legislation that would cost the government money (i.e., through a loss of tax revenue from gas and oil companies), something Mr. Varadkar has refused to do. Presumably, neither of the major parties in the current government—Fine Gael and Fianna Fáil—are willing to pass higher energy costs onto the farmers and manufacturers who are part of their political base. As a result, the Climate Emergency Measures Bill was not even debated in Parliament.

The declaration of a climate emergency and the launching of the Climate Action Plan may have been a clumsy attempt to “greenwash” the issuing of further exploration licenses to multinational oil and gas companies. Coined in the 1980s by the environmentalist Jay Westerweld, greenwashing refers to well-publicized environmental initiatives that distract from the perpetuation of destructive practices. (Chevron’s “People Do” campaign in the 1980s was the archetype.) Greenwashing has expanded to the political sphere with a similar mismatch of rhetoric and action. While the current Irish government may have mitigated voter defections to the Green Party through its promises and rhetoric, it has also killed the one piece of legislation with a chance of achieving net-zero emissions.

The sense of anger and betrayal among Irish climate activists is raw, and their options include both peaceful protest and judicial litigation. (There is already a lawsuit by environmental activists seeking to force the government to come up with a more effective response to climate change.) But the setback should not come as a surprise. In his encyclical “Laudato Si’,” Pope Francis presciently warned,“the most one can expect is superficial rhetoric, sporadic acts of philanthropy and perfunctory expressions of concern for the environment, whereas any genuine attempt by groups within society to introduce change is viewed as a nuisance based on romantic illusions or an obstacle to be circumvented” (54).

Pope Francis presciently warned,“the most one can expect is superficial rhetoric...and perfunctory expressions of concern for the environment.”

Climate legislation in the United States is at a more embryonic stage. Even the most optimistic activists concede that a national plan for climate action, including both emissions reductions and protection of natural ecosystems, is far from reality. Yet positive signs are starting to emerge. The protests against the Keystone XL Pipeline demonstrated the growing commitment of climate activists and their willingness to take risks, with public opposition to the pipeline growing during its construction. In February, a nonbinding congressional resolution was presented by Rep. Alexandria Ocasio-Cortez and Sen. Ed Markey “recognizing the duty of the federal government to create a Green New Deal” and outlining ambitious targets for a fully decarbonized society by 2030. It may have been promptly voted down by the Senate, but it was an important step toward real action.

Most of the major Democratic presidential hopefuls support the Green New Deal resolution. It is good news that candidates are responding to the growing proportion of U.S. voters who say climate change must be addressed. But U.S. climate activists need to heed Francis’ warning, and the cautionary tale emerging from Ireland, of how swiftly a U-turn can be executed in climate policy.

The Irish government’s co-option of the climate emergency declaration as political cover for not just business as usual but an acceleration of fossil fuel extraction is a stark example of political “greenwashing.” After much government fanfare about the declaration, the media moved on to stories about electric cars and the like. When the government bypassed democratic debate to grant more fossil fuel licenses, the public was not paying attention anymore. Climate activists now have to re-convince the Irish public that real action is needed.

The details of the Green New Deal resolution in the United States are vague. The absence of a strong line on fossil fuel extraction has permitted a broad range of politicians to co-sponsor the resolution, bolstering their green credentials without committing them to environmentally sustainable positions. And presidential candidates may find opportunities over the coming months to backtrack on support for effective climate action, similar to the watering-down of Medicare for All by some of its ostensible supporters.

But U.S. citizens, particularly Catholics, must ensure the future of their common home by holding their representatives to the delivery of binding legislation on decarbonization and the promotion of policies underlined by an integral ecology. While Ireland could still become an example to follow, it is now a cautionary tale about overestimating the extent to which governments will prioritize the common good over the politically expedient and economically profitable.

Our common home is too important to be co-opted for political choreography. The presidential incumbent and aspiring hopefuls should consider a pointed question from “Laudato Si’”:“What would induce anyone, at this stage, to hold on to power only to be remembered for their inability to take action when it was urgent and necessary to do so?” (57). 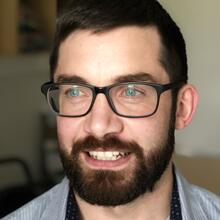 Keith Adams is a social policy advocate with the Jesuit Centre for Faith and Justice in Dublin.

There are people who acknowledge global warming but are against most of what is being proffered by other global warming activists as not feasible or even desirable. For example, the Green New Deal is considered absurd by nearly everyone.

Well, then, let them come up with their own plans rather than just naysay and anklebite. The problem is that we'd all rather pretend there's no problem.

They do have ideas but you apparently don’t want to read about them.

There are tax disincentives, tax break incentives, carbon credits, regulation, new infrastructure programs, R&D, some combination of some or all of the above. Aside from waving a magic wand at the problem, I don't know what else there is.

As I said often, you don’t read.

I am glad to hear that somebody with delegated power and authority in Ireland has wisdom and integrity and discovered a way to rescue the people of the sovereign state of Éire from ruining their culture and economy by playing along with the senseless climate crisis hysteria.

It's science, not hysteria. Unfortunately, the time of half way measures is past. Time to man up for a war.

300 million families in India burn cow dung for heat and cooking, worse than the lowest energy content lignite, less than 1 million Irish households use peat. any of you America Mag editorial writers know anything about logarithms? to not exploit possible natural gas reserves is a sacrilege.