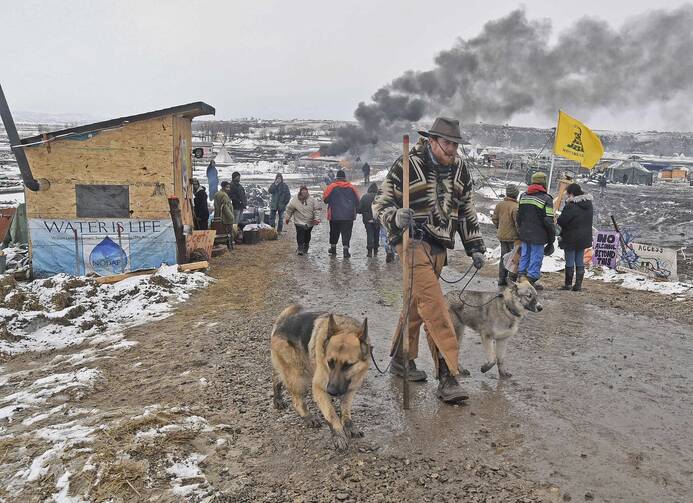 U.S. Jesuits call the decision to move ahead with the $3.8 billion Dakota Access Pipeline “morally unacceptable,” recognizing with Pope Francis that “water is a fundamental human right.”

According to the Jesuit statement, released on Feb. 23, the Standing Rock Sioux Tribe and the Missouri Tribal Nations “have raised significant concerns about potential threats to their water supply and their legitimate rights as sovereign governments to be consulted and heard in the permitting process.”

“Jesuits have been working beside and ministering to native peoples for centuries,” said Timothy Kesicki, S.J., president of the Jesuit Conference, the organization that represents the Jesuits in Canada and the United States. “We stand in solidarity with native peoples in Standing Rock and around the world who are advocating for environmental and human rights in the face of extractive industry projects.”

The Jesuits “invite people of good will, as well as members of Congress to call on the administration to reverse this decision and we applaud those members of the House and Senate Natural Resources Committees who have done so.”

According to Robert Brave Heart Sr., executive vice president of Red Cloud Indian School on the Pine Ridge Res­ervation in South Dakota, DAPL “poses a serious threat to the health and well-being of not only the Húnkpapȟa Lákȟota of Standing Rock and other native peoples but millions of people who depend on the water of the Mníšoše [Missouri River] and the great Ȟaȟawakpa [Mississippi River] systems. This is just another example of the many countless acts of genocide, racism and injustices that the indigenous peoples of this continent have endured for the last 500 years. Despite that, we are still here and will continue to fight for our rights, freedom and dignity!”

Timothy Kesicki, S.J.: "We must prioritize the needs of people over profit, promoting human dignity and care for creation and pursuing integral human development.”

Rodney Bordeaux, chief operations officer at St. Francis Mission on the Rosebud Reservation, said: “As with our ancestors, we must be steadfast, vigilant and proactive in our efforts to protect our rights. Standing Rock has given us worldwide exposure, and we must continue the momentum in a positive way, through prayer and the guidance it provides.”

According to a report by the Associated Press, a few dozen people remain on federal land near the DAPL construction site despite pleas from public officials that the self-described water protectors abandon the encampment many have occupied for months. Most of the protesters marched out of the area ahead of a Feb. 22 deadline imposed by the U.S. Army Corps of Engineers. North Dakota Gov. Doug Burgum said remaining protesters “will have every opportunity again to leave [on Feb. 23] without arrest.” The Army Corps had warned protesters to leave the site before the spring melt floods the land.

The A.P. reports that 18 National Guardsmen and dozens of law officers in full riot gear entered the camp from two directions about midday on Feb. 23, along with several law enforcement and military vehicles. A helicopter and airplane flew overhead.

About two dozen people were arrested in the first half hour of the operation, according to Levi Bachmeier, an adviser to Mr. Burgum.

When completed, DAPL will carry oil through the Dakotas under Lake Oahe, a reservoir along the Missouri River, into Iowa on a path to a shipping point in Illinois. Lake Oahe and the Missouri River provide drinking water for the Standing Rock Sioux tribe and surrounding regions and millions of people living downstream from the project.

In their statement, the Jesuits, together with the Red Cloud Indian School on the Pine Ridge Reservation and St. Francis Mission on the Rosebud Reservation, said they were deeply concerned by the Army Corps’ decision to issue an easement that allows the pipeline to cross under the Missouri River north of the Standing Rock Sioux Reservation. That decision came in response to a memorandum issued on Jan. 24 by President Donald J. Trump that urged the Army Corps to expedite DAPL’s review and approval process.

The Jesuits wrote: “Suspending the Environmental Impact Statement (EIS) process previously ordered by the Obama Administration, which would have determined the safety, environmental and climate impacts of the pipeline and alternative route crossings, is morally unacceptable. It is particularly troubling given the Army Corps’ previous determination that the pipeline crossing affects tribal treaty rights and that more study and consultation with tribes is required.”

Father Kesicki added: “The injustice facing native people at the Standing Rock Sioux Reservation is emblematic of perennial concerns facing indigenous communities nationally and globally due to an economy of exclusion. As the Society of Jesus emphasized at our recent 36th General Congregation, ‘The current economic system with its preda­tory orientation discards natural resources as well as people…The direction of development must be altered if it is to be sustainable.’ We must prioritize the needs of people over profit, promoting human dignity and care for creation and pursuing integral human development.”

Though Vatican officials cautioned that Pope Francis did not mean to specifically address the conflict at Standing Rock, he did argue on Feb. 15 that indigenous groups must give prior consent to any economic activity affecting their ancestral lands. The pope spoke out on the matter after meeting with representatives of indigenous peoples attending a U.N. agricultural meeting in Rome. Pope Francis said reconciling the right to economic development with the protection of the cultures and territories of indigenous people remains a profound challenge.

"In this regard, the right to prior and informed consent should always prevail," he said. "Only then is it possible to guarantee peaceful cooperation between governing authorities and indigenous peoples, overcoming confrontation and conflict.”

Though they did not specifically mention DAPL, in a letter to U.S. Secretary of State Rex Tillerson on Feb. 17, chairmen of the U.S. Bishops' Committee on Domestic Justice and Human Development and Committee on International Justice and Peace urged the Trump administration to care for creation both domestically and globally, arguing for federal investments in clean, sustainable energy development. The bishops add that the call to care for the environment echoes Pope Francis' call to help poor and vulnerable people adapt to the effects of climate change.

"The Judeo-Christian tradition has always understood the environment to be a gift from God, and we are all called 'to protect our one common home,'" said Bishop Frank J. Dewane of Venice, Fla., Bishop Oscar Cantú of Las Cruces, N.M. The letter was also signed by Sean L. Callahan, president of Catholic Relief Services.

The basic question at issue is whether the extension of the pipeline under the lake meaningfully compromises the access of the Indians (Native Americans?) to clean water for their community. This article does not address this matter and, as such, is nakedly political. I was educated by Jesuits, but I have to say that the order has sacrificed its well earned reputation for intellectual rigor over many centuries for the cheap thrills of leftist politics. May God bless the Jesuits!

President Obama stopped the pipeline in September 2016 when it was 99.999% finished. Where were the Jesuit Editorial Board and Kevin Clarke before September 2016?
Same question for Father Kesicki and the Bishops...I didn't see them quoted in these pages.
AMERICA your politics are showing !! And it's not a pretty sight.Nor an intellectually honest one. Situation ethics adopted to political purposes?

The Lakota Sioux were acting as any other holdout creditor in a classical bankruptcy proceeding. In this case they gamed that they had a trump card of immense value to disrupt completion of a project which benefits themselves and the states. Unfortunately, their claim to the land is tenuous owing to the terms of a 19th century treaty to which the other claimants (tribes) had previously agreed.

In the meanwhile, the protestors have disrupted the legitimate business interests of the Sioux in their lawful casino business.

I do worry about the soundness of the pipeline when it passes under
or near freshwater supplies. It would have been helpful if the article
had addressed those issues.

The use of a branch of the Sioux Language to label the Missouri
and other natural landmarks is too precious. Why didn't you use the
Mandan/Omaha names instead, as they actually lived on the land
before the Sioux, with their new found horses, virtually exterminated
the various tribes that lived in the Upper Midwest in the early 1800's.

If the Society of Jesus really wants to help Native Americans, let
them sell all their Schools and set up new schools in
the Reservations the Native Americans were forced to accept.

Why is it morally unacceptable to build a pipeline that will improve the dignity of millions of human lives just because collectivist ideologues of the liberation theology heresy wish to exploit Native Americans to advance their agenda of deconstructing the United States?

The pipeline does not cross, Standing Rock Sioux lands. With the relocation of their water source there is almost no threat to their water supply or anyone else's. Unlike Milo Yianopolos, many of us do not celebrate life in a post-factual world. Facts matter. Truth matters.

Perhaps the Jesuits should rededicate themselves to truth. Perhaps they should decry the morality of the locust protesters leaving an environmental mess in their wake that actually does threaten the local water supply?

Kevin Clarke's essay is misinformed and misguided about United States Constitution-guaranteed protections of one's citizenship. As of the Indian Citizenship Act of 1924, there are no more "Indians" within the original meaning of the United States Constitution...only U.S./State citizens with "Indian ancestry/race" entitled to no more and no less than every other non-Indian U.S./State citizen! The Constitution makes for no provisions for:
1. Indian sovereign nations. None of the asserted tribes possess any of the attributes of being a ‘sovereign nation:’ a. No Constitution recognition b. No international recognition c. No fixed borders d. No military e. No currency f. No postal system g. No passports
2. Treaties with its own constituency
3. Indian reservations whereby a select group of U.S./State citizens with “Indian ancestry/race” reside exclusively and to the exclusion of all others, on land-with rare exception-that is owned by the People of the United States according to federal documents readily available on-line that notes rights of ‘occupancy and use’ by these distinguished U.S./State citizens with “Indian ancestry/race” only with the land owned by the People of the United States.
4. Recognition of ‘Indian citizenship’ asserted by various tribes. There is no international recognition of “Indian citizenship” as there is no ‘nation’ from which citizenship is derived.
A simple question for politicians and MSM to answer…a question so simple, it is hard:
“Where is the proclamation ratified by 1/3rd of the voters of the United States that amends the Constitution to make the health, welfare, safety and benefits of a select group of U.S./State citizens distinguishable because of their “Indian ancestry/race?”