After the Gilroy shooting, a former army chaplain responds to a community in mourning 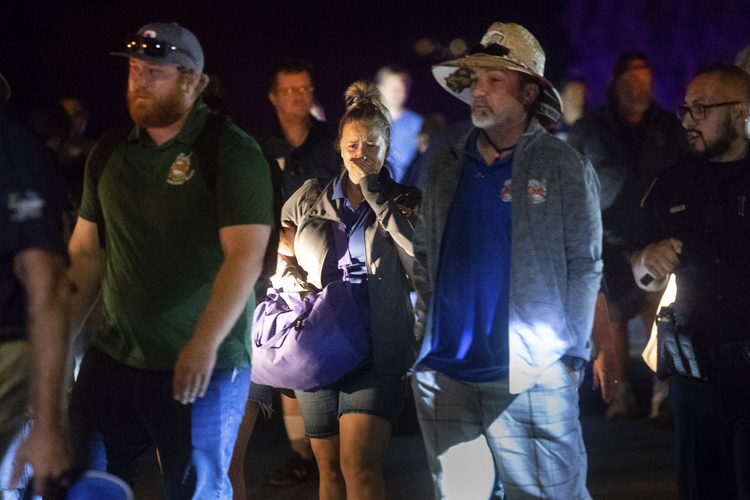 The Rev. Michael Hendrickson has only been on the job for a month as pastor at St. Mary’s Parish in Gilroy, Calif., but he may have been uniquely prepared for the tragedy that befell his community yesterday. Last night he found himself at St. Louise Regional Hospital in Gilroy consoling victims and their family members after another mass shooting event, this time on the last night of Gilroy’s annual three-day garlic festival. He had nothing but praise for how the staff at the small hospital responded in the aftermath of a shooting incident that left three dead and 15 wounded.

“It’s a very small regional hospital, and they were outstanding,” Father Hendrickson said.

“And I say that as a former military chaplain who did a tour with the army in Afghanistan. I have been with forward surgical teams, you might know them as MASH units, during mass casualty events. The hospital did very well.”

A U.S. Naval Academy graduate, Father Hendrickson was commissioned as a naval officer in May 1990. After leaving the Navy in 1994, he entered St. Patrick’s Seminary and was ordained a priest of the Diocese of San Jose in June 2001.

The irony of finding himself at a mass shooting event on his home soil after his military career had ended is not lost on Father Hendrickson. “I left the service in 2012, and I thought I was done with that kind of stuff; I thought that was the end of that.”

The irony of finding himself at a mass shooting event on his home soil after his military career had ended is not lost on Father Hendrickson. “I left the service in 2012, and I thought I was done with that kind of stuff.”

He does not believe any of last night’s victims are St. Mary’s parishioners, but the names of all the wounded have not been finalized. Father Hendrickson said the community is planning a number of responses to the suffering visited on Gilroy.

St. Mary’s will conduct a prayer vigil tonight in response to the tragedy, but he is unsure what comes next. “Honestly right now [the prayer vigil] is about where our mental horizon is; it’s hard to think beyond that right now.”

In a statement released on July 30, Bishop Frank J. Dewane of Venice, Florida, chair of the Committee on Domestic Justice and Human Development at the U.S. Conference of Catholic Bishops, called for support of the victims in Gilroy and for national moves to end gun violence. “Let us resolve to make the sacrifices necessary to end the violent killing that saturates our nation,” Bishop Dewane said.

“It is heartbreaking to learn yet again of a mass shooting that has taken innocent lives, and wounded many others,” he said. “It is disturbing that our society would seem to allow some to feel comfort in being violent. Our legislators must make changes to our gun policy to prevent the loss of life.”

He added, “As Americans, we must be honest with ourselves that we have a sickness, almost a plague, with the problem of gun violence. As Christians, we must look to the cross, repentant of the ways that have led us to this point and, with God’s grace, abandon such senseless, inhuman acts.”

Father Hendrickson has only been with St. Mary’s a few weeks, but he was born and raised in the area, so he knows the Gilroy community well. Though its population has grown from 8,000 to 50,000 over the last four decades, he says Gilroy remains a tight-knit community. Many people will have friends and family among the victims of yesterday’s shooting. And, complicating the task of people seeking to heal the community, many will also know the shooter, identified by police as Santino William Legan, 19, of Gilroy, and his family. He died at the scene after exchanging fire with police.

St. Mary’s Parish in Gilroy is about 75 percent Hispanic, according to Father Hendrickson, with many immigrant families and first- and second-generation descendants of immigrants. Farming is an economic mainstay here—“it really is the Garlic capital of the world,” he says—but Gilroy also serves as a bedroom community for Silicon Valley.

The garlic festival draws Gilroy residents and people from all over the San Jose area together; former residents travel to celebrate with children and grandchildren and “generations of volunteers” help put it together each year. Members of his parish were attending the festival when the shooting started.

Father Hendrickson said the local police had established security entry points where bags were searched, but the shooter evaded them after cutting through a fence to reach the festival grounds. He said many Gilroy police were on the scene and “got into the fight immediately, so it didn’t last long.”

Authorities say the shooter who attacked used an assault-type rifle and opened fire on three local police officers who immediately responded. Gilroy Police Chief Scot Smithee says even though the handgun-equipped officers were outgunned, they were able to quickly fatally shoot down the gunman.

The shooting occurred on the closing day of the annual Gilroy Garlic Festival.

What our legislators need to do to break the pattern of mass shootings
Matt Malone, S.J.

Our sad, muted response to the Virginia Beach shooting
The Editors

The gunman killed a 6-year-old boy, a 13-year-old girl and a man in his 20s. There was no immediate word on the other 15 people who were either wounded or suffered injuries escaping the shooting. Mr. Smithee says the motive remains unknown, and police are still investigating whether there was a second suspect.

In a statement posted in Spanish and English on the St. Mary’s Facebook account last night, parishioners said: “Our hearts are in mourning tonight. We stand in solidarity with the victims of today’s tragedy. We fall before the Lord asking for healing and peace in our Gilroy community.

“Count on our prayers and our support for all those affected by the shooting at the Gilroy garlic festival…. What happened today won’t break our spirit. Gilroy is a strong community of compassionate people who give their time every year to organize this amazing event for the benefit of others.”

The Most Rev. Oscar Cantú leads the Diocese of San Jose and issued a statement on July 29. “Our hearts are heavy with sadness in the wake of the horrific shooting that claimed the lives of at least three innocent victims and injured several others at the Gilroy festival yesterday,” he said. “Our thoughts and prayers are with the victims and their families in this time of mourning and suffering. We lift the entire Gilroy community in prayer during this time of anxiety, anger and sadness. May grief give way to healing and peace, as we work together to protect the innocent and prevent future massacres. May peace prevail in our hearts and communities.”

Bishop Cantú added, “We are grateful for the quick and professional action of first responders who saved countless lives.”

With reporting from The Associated Press. Updated with U.S.C.C.B. statement on July 30.

More: US Politics / Guns / US Church

"'The irony of finding himself at a mass shooting on his own soil after his military career...'".Not to take away from acknowledging this horrific event but something about that statement disturbs me in itself. It implies that over there, where we invade and occupy other countries, we expect and have nothing much to say about the deaths of a 6 year old,a 13 year old, a 20 year old, over there. The most consideration those 6 year old's, 13 year old's and 20 year old's will ever get from Americans,who may have themselves done the killing is calling them "collateral damage", or expressing cliches like "war is hell". Like only our lives, our 6 year old's, 13 year old's and 20 year old's really matter.

Until the institutional Church is willing to recognize the Board Certified Chaplain ministry of the laity, the Rev. Hendrickson is a retired military priest. The term "mental horizon" in the face of horrific loss bespeaks the difference.

How many more of these killings have to occur before we accept that the second amendment has failed miserably as a social experiment? We are so fixated on our rights that our responsibilities to our fellow human beings are completely ignored. It's time to recognize gun ownership as a moral flaw, and to repeal; the second amendment. How many Christians can even tell you the 6th commandment? But they sure can tell you about. the second amendment!

Thank you, Father Hendrickson, for your service to our country and our Church. Perspectives gained by your experiences are valuable to us. Thank you, also, for Bishop Cantu for the thoughtful prayer, ending with, "...may peace prevail in our hearts and communities."