The Editors: Long-term care upholds the dignity of all Americans, caregivers included 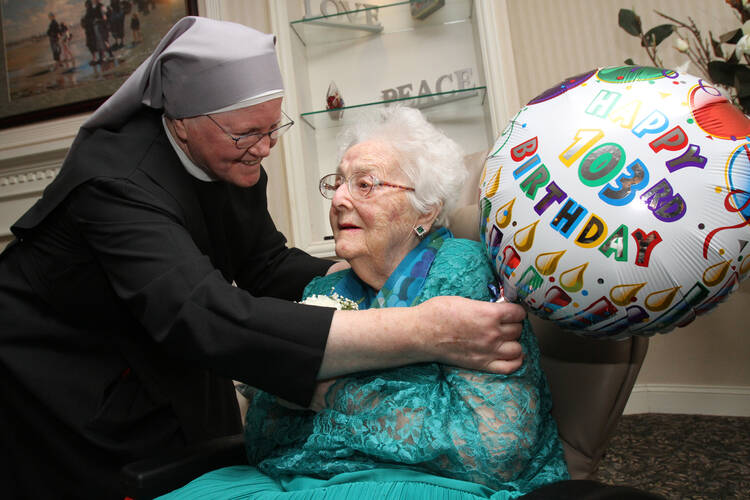 Sister Elisabeth Anne Roche adjusts a balloon next to honoree Rita Driess, who will turn 103 March 9, during a birthday party for centenarians Jan. 20 at the Little Sisters of the Poor's Queen of Peace Residence in the Queens borough of New York. (CNS photo/Gregory A. Shemitz)

Most crises do not give responders the benefit of being completely predictable. But the so-called silver tsunami—the demographic shift toward an older U.S. population as baby boomers enter retirement age—has been on the horizon for years, and its effects are now beginning to be felt.

Each day 10,000 people turn 65, and half of Americans age 65 and up will require long-term assistance at some point for an average length of two years. The health care system is not equipped to meet the needs of an aging population, especially the roughly 14 million middle-income seniors who do not qualify for Medicaid and cannot afford private long-term care insurance.

Long-term care has not been a priority for the Trump administration, and while promises for new social programs—from Medicare for All to free public college—have been touted by Democratic presidential hopefuls, so far only three of the two dozen candidates have put forward policy proposals to address the long-term care of older Americans.

States are beginning to realize that they cannot wait for Congress to act. In May, Washington became the first state in the country to adopt a publicly funded long-term care benefit. Under the Long-Term Care Trust Act, workers will pay a 0.58 percent payroll tax into a state fund. After 10 years, enrollees will be eligible for a $100 daily allowance to pay for a wide range of services, including stays in an assisted living facility and help with daily activities like dressing and bathing, as well as home modifications and reimbursements for family caregivers. The benefit has a lifetime cap of $36,500, indexed for inflation.

That might not sound like much, given that the average cost of assisted living in Washington State is over $4,000 per month. But the vast majority of seniors (76 percent, according to a survey by the AARP) say they would prefer to stay in their homes for as long as possible, and many would be able to do so with modest or short-term assistance.

Providing for long-term care helps not only older Americans but also the millions of family members who today act as unpaid caregivers, often at a high emotional and financial cost, as well as professional in-home aides. While Washington State already ensures a $15 minimum wage for professional caregivers, care aides nationwide earn an average wage of $12, which leads to high turnover in the industry and a shortage of workers. Sterling Harders, the leader of the union that represents caregivers in Washington State, said the new trust will “help ensure that the caregivers who are providing this care are skilled, that they are trained, that they are certified, that they are paid fairly for the work that they’re doing.”

States confronting the coming demographic wave can look to Washington as a model for upholding the dignity of not only our elders but also the spouses, children, grandchildren and professionals who care for them.

First you have to convince 'em they need a caregiver. Oy vey!