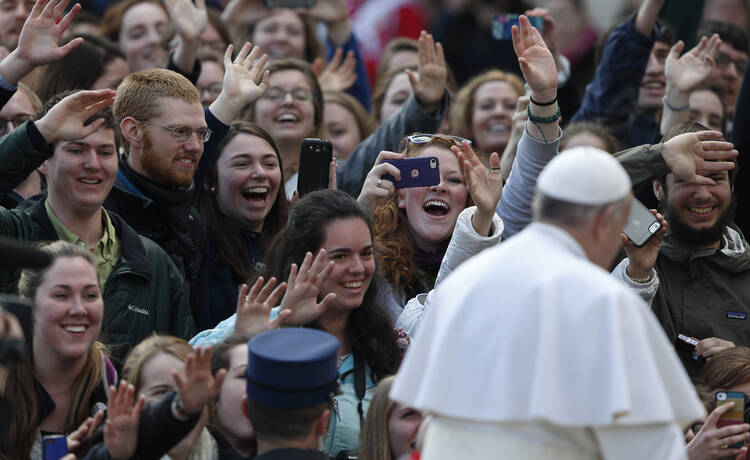 Seeing the elderly only as a burden "is ugly. It's a sin," Pope Francis said at his weekly general audience.

"We must reawaken our collective sense of gratitude, appreciation and hospitality, helping the elderly know they are a living part of their communities" and sources of wisdom for the younger generations, the 78-year-old pope said March 4 at his weekly general audience.

Continuing a series of audience talks about the family, Pope Francis said he would dedicate two talks to the elderly, looking at how they are treated in modern societies and at their vocation within the family.

"If we do not learn to treat the elderly well," the pope said, "we won't be treated well either" when the time comes.

In a talk punctuated with references to his own family life, his grandmother and his experience visiting homes for the elderly in Buenos Aires, Pope Francis said even Christians are being influenced by cultures so focused on production and profit, that the biblical exhortations to respect the aged and draw upon their wisdom are being ignored.

"We elderly are all a bit fragile," the pope said, changing his prepared text to include himself among the aged.

The elderly he visited in Buenos Aires, he said, would often tell him that they had many children and that their children visited them. "And when was the last time they came?" the pope said he asked one woman. "She said, 'Well, at Christmas.' It was August. Eight months without a visit from her children. Eight months of being abandoned. This is called a mortal sin. Understand?"

"It is so easy to put our consciences to sleep when there is no love," he said.

"While we are young we are tempted to ignore old age as if it were an illness to hold at bay," he said. "But when we become old, especially if we are poor, sick and alone, we experience the failures of a society programmed for efficiency, which consequently ignores the elderly."

"We want to remove our growing fear of weakness and vulnerability, but doing so we increase the anguish of the elderly," Pope Francis said.

The aged are the "reserve of the wisdom of our people," they have experienced and survived the struggles to raise a family and provide them with a dignified life, he said. Tossing them aside means tossing aside their experience and the way that experience can contribute to making life better today.

A society that cannot show gratitude and affection to the elderly "is a perverse society," the pope said. "The church, faithful to the word of God, cannot tolerate such degeneration."

"Where the elderly are not honored," he said, "there is no future for the young."

Before the audience, Pope Francis met briefly with 60 bishops from 35 countries who were participating in a conference sponsored by the Focolare movement. Addressing the bishops from "the bloodstained lands of Syria, Iraq and Ukraine," the pope assured them he is "united with them" each day in the celebration of the Eucharist. "In the suffering you are experiencing along with your people, you experience the strength that comes from Jesus in the Eucharist, the strength to go forward united in faith and in hope."

Cindy Wooden - Catholic News Service
@Cindy_Wooden
Show Comments (
1
)
Comments are automatically closed two weeks after an article's initial publication. See our comments policy for more.
Bruce Snowden
7 years 6 months ago
Respectfully, allow me to venture the following. In a teaching Pope Francis recently said, that ignoring the elderly or treating them badly is a sin. I agree. Continuing he explained, “The elderly person is not an alien. Now or inevitably anyway we will be old.” He added, “If we do not treat the elderly well we will not be treated well either,” when the time comes. These words have urged me to post the following, which hopefully, will produce good fruit, offering a way to treat the elderly, the sick, the infirm, with love and respect, doing for them what you would have them do for you! Twenty years ago as my Mom, neared death in a non-sectarian hospital in NYC, I was shocked out of my wits to hear a nurse say to me, “Your mother is diapered!” This seemed so lacking in human respect and compassion, in feeling for the elderly, as diapers are for infants and toddlers, not adults, certainly not for a mother of six children, in her time very acquainted with changing diapers, washing them too, long before disposables made diapering a whole lot easier. But there she was, diapered like an infant, or toddler, at 87 years old and that’s how she died! I determined to try and end the "diaper" terminology especially in Catholic Health Care Facilities, certain that at least there, respect and compassion for the infirm elderly would certainly prevail. And it does in so many other ways! Well, for years I tried, especially as a volunteer in a Catholic Health Care Facility, where I found sensitive ears, kind words, but an unwillingness to mandate the outlawing of the word “diaper” designating the undergarment of the elderly, the sick, the infirm, to less humiliating and embarrassing language. No one seemed to have the courage to decisively move, so I was not successful. I also tried to influence a top Catholic newspaper, a Bishop too, but again, no one “took the bait” so to speak . My efforts failed again but not my determination. Now living elsewhere I plan to try to influence willing ears and courageous hearts in Health Care Service to the elderly, to delete use of the word “diaper” in their Facilities when it relates to the undergarment of the infirm elderly. It seems to me a good way to heed Holy Father Francis’ words, about “ignoring and treating the elderly badly” which he called sinful! The word “diaper” needs to be deleted as acceptable language in Health Care Facilities, especially Catholic ones describing the undergarment of the elderly, others too, in a gentler, more comforting way. As the Lord has said, “Do unto others as you would have them do unto you!” This makes perfect sense to me.