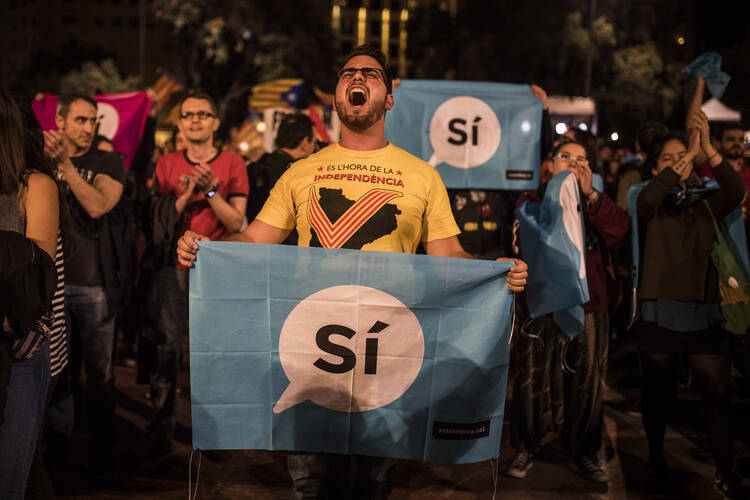 Catalonia and its capital city, Barcelona, are practically synonymous with Modernism and Surrealism, art forms not confined to museums and galleries but tangible in the Spanish region’s architecture, street corners and squares.

This summer Barcelona earned a less welcome distinction, joining the baleful roster of European cities to suffer a terrorist attack; 17 died on the city’s central La Rambla thoroughfare when a van driver intentionally drove into a crowd of pedestrians on Aug. 17. Then a contentious referendum on Catalonia’s independence from Spain, held on the first Sunday of October, provoked a violent response from the Spanish police. Catalonia’s modern politics became surreal.

Barcelona is a city of great beauty and many surprises, as are many smaller Catalan towns. The splendid and wealthy capital hosted the 1992 Olympics, still reckoned among the best ever. Colloquially known throughout Europe by its airport identifier (BCN), Barcelona’s visitor numbers have continued to rise, drawn by the pleasant climate and rich cultural heritage—including those visual arts of Miro and Dalí, Picasso and Gaudi, and particularly the latter’s wondrous Art Nouveau landmark the Sagrada Familia (Holy Family) Basilica, begun in 1882 and still at least 10 years from completion.

The Oct. 1 referendum led to a brutal crackdown by Spanish police attempting to shut down polling places and seize ballots.

Catalonia was also a place of constant opposition to fascist dictator Francisco Franco, who, after victory in the Spanish Civil War of 1936-39, repressed the region’s cultural institutions and banned the use of its language. This littoral northeast corner of the Iberian peninsula, fought over and ruled by various powers over many centuries, began to reclaim its identity as democracy returned to Spain following Franco’s death in 1975. As the darkness of fascism receded, Catalonia (Catalunya, in its own language) emerged with a restored and proud sense of itself, enjoying prosperity both through industry and from a tourism boom on its sunny Mediterranean coast and in its historic inland towns.

But the city has been marred by the tensions over the Catalan demand for independence. The Oct. 1 referendum went ahead despite the Madrid government’s having banned it, leading to a brutal crackdown by police attempting to shut down polling places and seize ballots. Those awful scenes, seen all over the world, are much more significant than the poll’s eventual result (90 percent for independence, according to the Catalan government). Spain’s riot police fired rubber bullets to prevent people voting, and almost 1,000 people were reportedly injured, some seriously.

Catalan farmers in tractors and, incredibly, the city’s firefighters were seen protecting people from the state police.

Civil Guard officers were seen charging voters, beating them violently. Catalan farmers in tractors and, incredibly, the city’s firefighters were seen protecting people from the state police. On the day of the vote, a video went viral of large groups gathering in Madrid, making the Nazi salute and singing Franco’s anthem. Meanwhile, the BBC’s main Saturday evening news program chose to broadcast footage of a small group of pro-Madrid government demonstrators.

Catalans voted in support of the 1978 democratic Spanish constitution, which restored some political and cultural autonomy to the region, but a further Statute of Autonomy, adopted by Catalan voters in a 2006 referendum, stirred unease in the rest of Spain. That unease, in turn, led to louder demands for independence. In late 2015, Catalonia’s semi-autonomous government resolved to launch a process of secession from Spain, leading to the Oct. 1 referendum opposed by the Madrid government on constitutional grounds.

If Scotland leaves the U.K., will Northern Ireland be next?
David Stewart

Spain’s prime minister, Manuel Rajoy, has not ruled out arresting Catalonia’s premier, Carles Puigdemont, and for some Catalans this strategy evokes unpleasant memories of the Franco regime. Sister Suso Mons, a member of the Moviment de Professionals Catòlics de Barcelona, told America by email, “For sure, nothing similar has happened since Franco died.” Sister Mons wrote: “A referendum agreed with the [Spanish] state would be the best option, but the state refuses. The conflict will last until a political solution, not a legal or police one, is sought, although we do not know at this moment what the opening of political negotiations may be. Just uncertainty.”

One of the most potent symbols of Catalan identity is the football team F.C.B. (Futbal Club de Barcelona), counted for many years among the world’s best. Their popular slogan is mes que un club (“more than a club”). On Sunday their match against Las Palmas at Barcelona’s Camp Nou stadium almost got canceled after the opposition chose to embroider the Spanish national flag on their shirts. Eventually the teams played, but the stadium was closed to spectators.

Another great symbol of Catalonia is the Benedictine monastery of Montserrat, high in the mountains; St. Ignatius had gone there often during his conversion experiences, learning much about prayer from the monks. Franco’s forces once tried to burn it down, and the descendants of those monks, according to Sister Mons, have been outspoken about their nation’s turmoil, defending the rights of Catalans to self-determination.

Many across Europe are nervous now; such an impasse was never part of the founding vision of the European Union. Scottish supporters of independence are paying close attention to events in Spain, and a large march in support of the Catalans took place in Edinburgh, mirroring several recent big demonstrations in Barcelona supporting Scottish independence. Spanish democracy is still quite young and now appears more fragile than had been thought. Spain and the whole E.U. now sails further out, not onto the placid Mediterranean but into deeper, stormier waters.