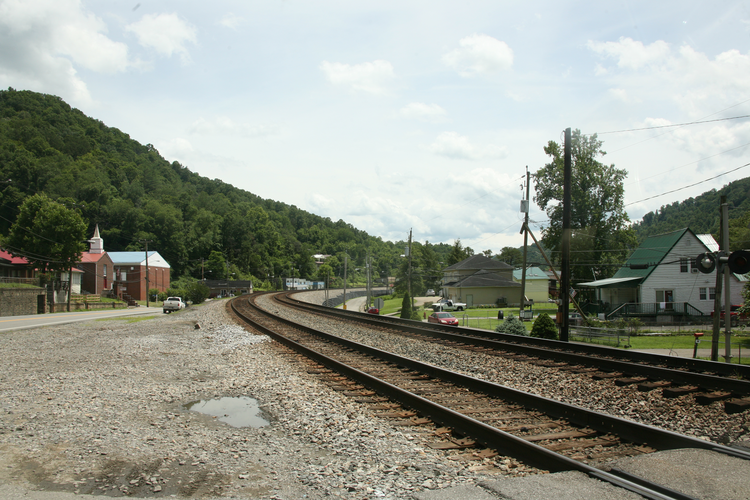 Train tracks are seen in Kermit, W. Va., June 26, 2019. The small town in Appalachia is the epicenter of the nation's opioid crisis. (CNS photo/Colleen Rowan, The Catholic Spirit)

KERMIT, W.Va. (CNS) -- When presidential candidate and U.S. Democratic Sen. Elizabeth Warren of Massachusetts visited Kermit May 10 to discuss the state's opioid crisis, Franciscan Sister Therese Carew was glad that someone was bringing attention to the crisis, but said it is a shame that it has taken so long.

"The opioid crisis didn't just pop up," said Sister Therese, who heads Christian Help, an outreach center providing emergency assistance in Kermit. Sister Therese had the opportunity to meet Warren and speak to her briefly about her community's plight.

The Franciscan sister moved to Kermit 10 years ago, just a few months after the now infamous FBI shutdown of a town pharmacy through which 3 million pills were funneled into the community in 10 months. She has been executive director of Christian Help for four years and is a member of Sacred Heart Parish in Williamson.

The most heartbreaking of the crisis, she said, is the children.

"If they go in and do a drug bust and there are children in the home they take those kids and literally hand them over to a family member," Sister Therese told The Catholic Spirit, newspaper of the Diocese of Wheeling Charleston.

The most heartbreaking of the crisis, she said, is the children.

"So, we will have aunts and uncles and grandparents, great-grandparents coming in" for diapers, clothing, baby bottles, formula and more, she said. And the children living with parents who are addicted, fend for themselves.

"They're not getting follow-up for routine medical because parents are under the influence," she said. "They aren't being parented. The kids are the parents, and they are the ones -- the older kids -- getting meals for the younger kids. That's where I see some of the biggest impact."

Next door to Christian Help, in the same building, is ABLE Families serving as a beacon of hope for Kermit's children. ABLE stands for stands for Affirming, Believing, Learning, Empowering.

The organization is dedicated to empowering families in the rural Tug Valley area of West Virginia's Mingo County to gain more control of their lives.

Stephanie John, a 48-year-old who grew up in Kermit works at ABLE and said she sees a large number of grandparents raising their grandchildren because of parents' addiction and incarceration. The lack of jobs for so long -- most notably with the decline of coal mining -- has led many to turn to drugs, she said.

"People have lived so hard here and had such a bad time," she said. "I think a lot of them get into the drugs as an escape for a little while ... and then it just takes over. And from there, it's just like a tornado."

The cycle of poverty choking the area is a huge factor, she added.

"It's a crazy cycle," Sister Therese said. "I've had people ask me what's the answer, and I don't know what the answer is."

"You have generations of people that for the men it was coal mining. Any a young man, up until about 10 to 15 years ago, if he was going to get a home, a car, a truck -- the American dream -- he was going to work in coal. And ... it's not here anymore with as great a need as it once was."

When the opioid crisis struck my family
John J. Conley

Three hours north is Harrison County, which once had the highest number of overdose cases in the state. In response to the epidemic, Ellen Condron, associate professor of nursing and coordinator of Mental Health Nursing at Fairmont State University, spearheaded Community Conversations on Substance Abuse at her parish of All Saints in Bridgeport.

She initially planned for this to be a one-time forum in April 2016, but the series has garnered so much interest that it continues with new segments and will have its 11th session this fall.

Upon learning that West Virginia has the highest number of overdose deaths in the country, Condron said great strides have been made in the crisis, "but it's depressing that we're still there."

Rowan is executive editor of The Catholic Spirit, newspaper of the Diocese of Wheeling-Charleston.

"FBI shutdown of a town pharmacy through which 3 million pills were funneled into the community in 10 months."

Raises more questions like why was the pharmacy pushing the opioids? Were all those people getting prescriptions for those drugs? If so, who was writing the prescriptions and are they being held accountable? And why would people get prescribed so much of an addictive drug?
Who made money? Where did people with no jobs get money to pay for the drugs? Sure wish there were more answers here.