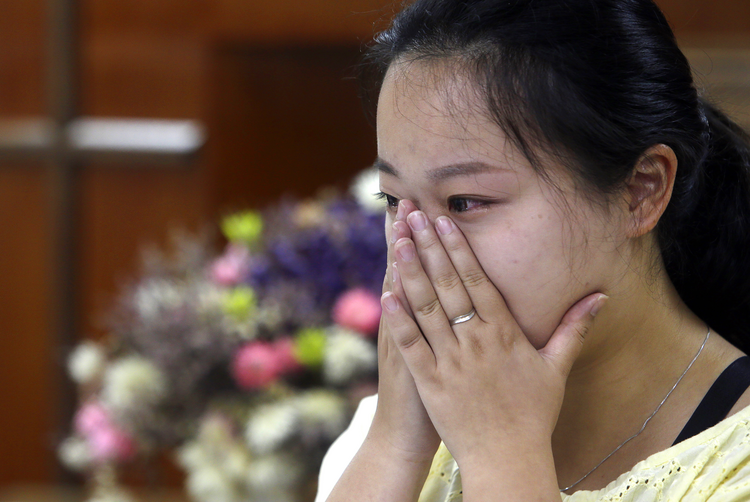 In this Sunday, July 7, 2019, photo, Ren Ruiting, daughter of Liao Qiang, cries as she speaks during an interview with The Associated Press at a church in Taipei, Taiwan. Ren arrived in Taiwan last week after fleeing China with five family members. The family hopes to stay in Taiwan while they seek asylum in the United States, but with a 15-day tourist visa, their future is unclear. (AP Photo/Chiang Ying-ying)

TAIPEI, Taiwan (AP) — The Sunday service this week at an unassuming church in Taiwan was especially moving for one man. It was the first time Liao Qiang had worshipped publicly since authorities shut down his church in China seven months ago.

The 49-year-old arrived in Taiwan last week after fleeing China with five family members. He and his 23-year-old daughter, Ren Ruiting, described living under constant surveillance for the past seven months after authorities detained them and dozens of other members of their prominent but not government-sanctioned church in December.

China's ruling Communist Party has carried out a widespread crackdown on all religious institutions in recent years, including bulldozing churches and mosques, barring Tibetan children from Buddhist religious studies and incarcerating more than a million members of Islamic ethnic minorities in what are termed "re-education centers." President and party leader Xi Jinping has ordered that all religions must "Sinicize" to ensure they are loyal to the officially atheistic party.

In contrast, Taiwan's democratically elected government has long taken a hands-off approach to religion on the island, where most follow Buddhism and traditional Chinese beliefs, but where Christianity and other religions also thrive.

Liao and Ren's account is the first detailing what has happened since the detentions began at the Early Rain Covenant Church. It shows the determination of the Chinese government — and the lengths it has gone — to eradicate a congregation that has long been a thorn in its side.

Liao and Ren's account shows the determination of the Chinese government — and the lengths it has gone — to eradicate a congregation that has long been a thorn in its side.

Early Rain's pastor, Wang Yi, who remains detained, has been critical of Xi and the party. He has made a point of holding a prayer service on June 4 each year to commemorate the 1989 bloody crackdown on democracy protesters in Beijing's Tiananmen Square, an anniversary that China's government has sought to wipe from memory.

Ren told The Associated Press that she had to report her whereabouts to police using social media whenever she went out. She was told her safety couldn't be guaranteed if she disobeyed.

"That's when I knew it was no longer safe for us here, and that my children were most in danger," Liao said after Sunday's service, attended by about 30 people, at the small Reformed Presbyterian Xinan Church in Taipei.

Government officials in China did not immediately respond to requests for comment.

China's government requires that Protestants worship only in churches recognized and regulated by the officially sanctioned Three-Self Patriotic Movement, although many more are part of independent congregations.

"One day when China opens up, we'll go back," she said. "Whether it's five years, or even 10 years, we'll eventually make our way back to where God wants us to serve."

More than 100 members of Early Rain were taken into custody from the church or their homes on Dec. 9 and 10, according to Human Rights Watch. Those detained included Wang, the pastor. His wife, Jiang Rong, was released on bail last month.

Liao said the police tried to force him to sign a statement renouncing his church, but he refused.

"If our elders decided to break up the church, then I can accept it," he said. "But it's not up to you to say it's evil or illegal."

The Catholic Church in China | A Short Documentary
America Films

Liao and his family hope to stay in Taiwan while they seek asylum in the United States, but with a 15-day tourist visa, their future is unclear.

"I'm not sure whether they can stay beyond the visa, unless the Taiwanese government is willing to make it a humanitarian case on the basis of religious persecution," said Chiu Ling-yao, secretary-general of the Taiwan Association for China Human Rights, which is trying to help the family find a solution.

The spokeswoman for the American Institute in Taiwan — the de facto U.S. embassy — could not be reached for comment.

Ren hopes that one day she can return to her home.

"One day when China opens up, we'll go back," she said. "Whether it's five years, or even 10 years, we'll eventually make our way back to where God wants us to serve."