Disabled seniors could be a powerful voting bloc

Disabled seniors could be a powerful voting bloc 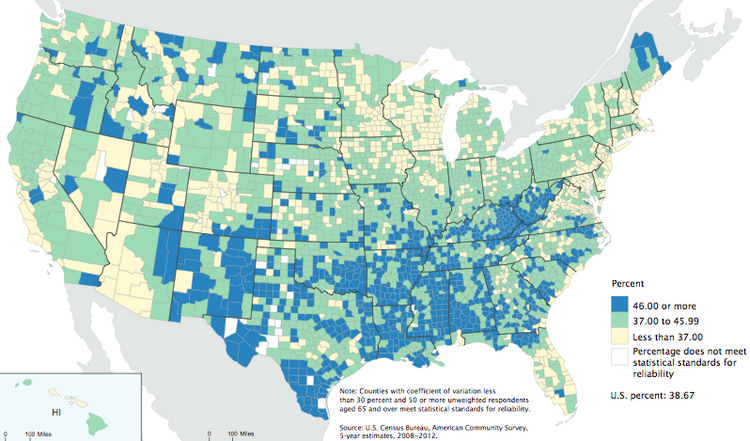 Stories about the political attitudes of Millennials—and young, affluent voters in general—make for good journalism because they flatter potential new readers. But older Americans are more likely to vote, and a new Census report hints at an issue of particular concern to them.

“Older Americans With a Disability: 2008-2012,” released on Tuesday, estimates that there are now 16 million Americans over the age of 65 that are disabled (with “physical or mental impairment that substantially limits one or more major life activities”), amounting to about 5 percent of the total population. The number is expected to grow significantly as Baby Boomers continue to age.

As a voting group, older Americans with disabilities may demand greater compliance with the Americans with Disabilities Act (ADA), as well as more affordable home health care and other ways to maintain independent living situations. Their needs already effect public transit (funding “paratransit” services, and determining who is eligible for them, are major challenges) and are disconcerting back-to-the-city types who value aesthetics above all else. (See the long-running resistance to visible curb cuts in Boston’s Beacon Hill neighborhood.)

But disabilities are not evenly distributed in among the over-65 bloc. According to the Census report, 54 percent of seniors without a high-school education have a disability, compared with only 26 percent of those with at least a bachelor’s degree. There are also geographic differences, with Mississippi having the highest percentage of seniors with a disability (48 percent) and Arizona at the other end of the scale (35 percent). Older Americans with disabilities are more common in the rural areas of Southern states. In an age of political polarization, it’s not certain that an older voter in a blue state like New York will feel solidarity with voters facing accessibility problems in a red state like Arkansas.