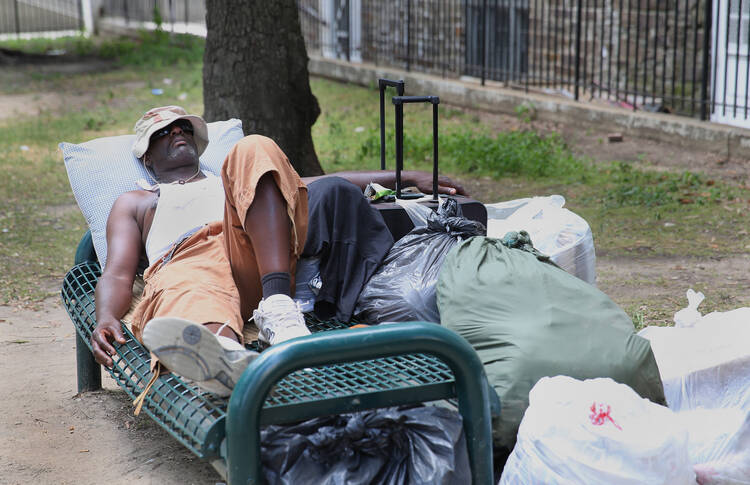 A homeless man rests on a bench in a park outside St. Vincent de Paul Church in downtown Baltimore. (CNS photo/Bob Roller)

Her new three-bedroom apartment in a new Catholic Charities-sponsored building, may not be a mansion, but for Sandra it feels that way.

Faced with being homeless last spring as a deadline for her family's stay at a transitional housing apartment neared, Sandra was scrambling to find a place she and her three sons, 22, 15 and 4, could afford in the high-cost housing market of San Jose, California.

That's when she learned about Kings Crossing Apartments, one of nearly 20 affordable housing sites established by Charities Housing of Catholic Charities of Santa Clara County. At $300 a month–a bargain in the Bay Area where rents for a similar unit can be more than 10 times that amount—Sandra is able to provide a clean, safe and stable home for her family.

"I thought it was a tremendous blessing," said Sandra, who asked that her real name not be used because of past domestic violence incidents.

"Somebody had told me, 'You went from a shoe box to a mansion.' That's exactly how we feel. It's very big and beautiful," she said of her family's new home.

Unable to work for the past two years because of a long-term disability, Sandra is only able to afford her family's share of rent for the 1,000-square-foot apartment with support from the state of California and her eligibility for a Section 8 housing subsidy. Without those benefits, Sandra fears the alternative: homelessness and deep poverty.

The arrangement with Charities Housing allows her oldest son to stay in college while living at home and complete studies to become a physical therapist rather than be forced to take a full-time job to support the family.

Affordable housing is one of four areas Catholic Charities USA is pledging to work on to identify innovative solutions during the next five years. The three other areas, Sister Markham said, include an integration health and nutrition services; better responses to immigrant and refugee needs; and leadership development and strengthening Catholic identity among the laypeople who increasingly taking on executive roles in Catholic institutions.

Other priorities that the national Catholic Charities network wants to "elevate" include its disaster services operations, social enterprise programs, and advocacy and social policy initiatives.

But it's the lack of affordable housing that stood out as the country's most pressing need, Sister Markham told Catholic News Service.

"Across the entire country, regardless of the demographics of the area, affordable housing was seen as absolutely critical right now," she said. "Whether that was Silicon Valley and people not being able to rent an apartment to work at Google, or whether it was our core cities or our rural areas, people identified the housing crisis as probably the top issue that is facing people today."

In 2015, Catholic Charities agencies operated nearly 31,907 permanent affordable housing units occupied by 75,195 people, making the nationwide network of diocesan agencies among the country's largest providers of housing options for low- and moderate-income people. Depending on local needs, projects can focus on the elderly, chronically homeless people or families.

Catholic Charities USA is looking to partner with government and private sources to develop upward of $50 million in housing initiatives, Sister Markham said.

Such efforts would still leave a wide gap between affordable housing that's available and what is actually needed, Catholic Charities leaders told CNS.

Santa Clara County, California, is a prime example of the need.

"There is a divide between the haves and have-nots," he told Catholic News Service.

The California crisis has grown as a result of the Great Recession and the collapse of the housing market, Kepferle explained, as speculators came in and grabbed as many properties as they could, causing real estate prices to skyrocket and rents to follow along. The growth in employment in the tech industries has added to the demand for any housing, giving property owners impetus to continually raise their asking price and rents.

The need for affordable housing is so great that earlier this year when Charities Housing was preparing to open a 70-unit building for families, the agency received nearly 6,500 applications, said Executive Director Dan Wu.

"We never experienced that before. For other buildings, it's been a roughly 10 to 1 ratio (of applications to units available). That was 93 to 1. This we just didn't expect," Wu said.

This time, many applications came from middle-class families and Charities Housing had to turn them away because their incomes were too high, Wu said.

"You just can't comprehend that when you don't live here," Wu said. "It's hard even when you do live here. We have staff who have been with us for a while and want to buy a home and are trouble finding a home they can afford."

Charities Housing is one of several Bay Area programs developing affordable housing. The San Jose Diocese has more projects on the drawing board, but Wu said that with a five- to seven-year time period to develop a project from concept to opening, his agency can barely meet the growing need for people like Sandra and her family.

Sandra considers herself fortunate that she was in the right place at the right time to get an apartment through Charities Housing.

"If I was not in this program, there would be no way I could survive right now."

Dennis Sadowski is a correspondent for Catholic News Service.