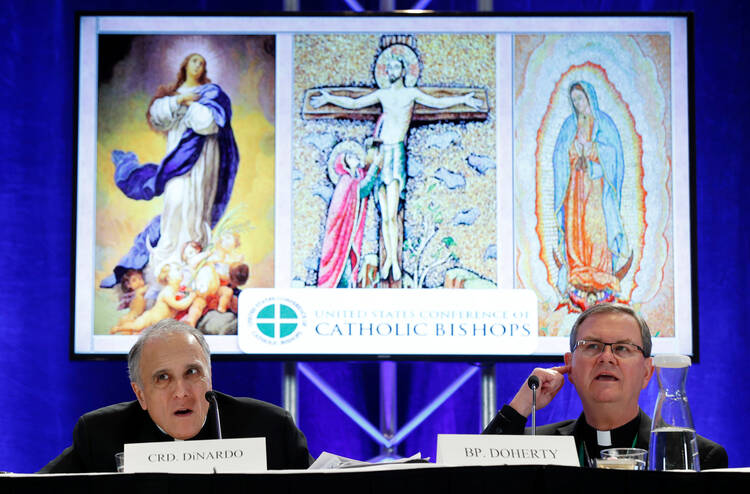 Cardinal Daniel DiNardo, president of the U.S. Conference of Catholic Bishops, and Bishop Timothy L. Doherty of Lafayette, Ind., chairman of the U.S. bishops' Committee for the Protection of Children and Young People, field questions Nov. 12 during a press conference at the bishops' general assembly in Baltimore. The two were among a small group of bishops who met with abuse victims in Baltimore June 12. (CNS photo/Kevin Lamarque, Reuters)

It has been one year since Theodore McCarrick, the once-powerful cardinal archbishop of Washington and Vatican advisor, announced his withdrawal from public ministry after an allegation that he sexually abused a teenager decades ago was found credible. Since then, other revelations have unsettled the U.S. church. The Pennsylvania grand jury report, released last August, led to investigations into the church’s handling of abuse claims in 20 other states, and dozens of dioceses have released the names of credibly accused priests.

In June, the U.S. bishops put forward their first official response to the growing chorus of justifiably angry and frustrated Catholics who want to see concrete measures and public accountability for bishops responsible for clerical abuse and its cover-up. At their annual spring meeting in Baltimore, the bishops overwhelmingly approved three measures toward that end: a third-party hotline to report abuse; a system, which can include laypeople, to receive and investigate these claims; and a protocol that allows bishops to restrict the ministry of retired prelates who are accused of abuse or negligence.

These new measures have, however, been met with skepticism from some church reform groups because they do not absolutely require the involvement of laypeople.

These new measures have, however, been met with skepticism from some church reform groups because they do not absolutely require the involvement of laypeople. Bishops have responded that such involvement is a practical certainty even if not formally mandated. At this point, the reasonable stance among concerned Catholics regarding these new policies is “trust but verify.”

These reforms are a welcome and necessary first step; they almost certainly will need to be updated and revised in the coming years. In any case, even the most perfect protocols need to be implemented with justice and transparency in order to restore trust. The true test of the bishops’ commitment to reform will be how these policies are used to report and respond to actual episcopal misconduct.

At that point, the faithful will expect—and pastoral responsibility will require—a forthright response, applying these new procedures as its starting point and going beyond them where necessary. This will show whether the bishops have truly learned the lessons of this past year.

"...if the bishops have learned the lessons of the sex abuse crisis"

All signs point to "no"

“It has been one year since Theodore McCarrick, the once-powerful cardinal archbishop of Washington and Vatican advisor, announced his withdrawal from public ministry after an allegation that he sexually abused a teenager decades ago was found credible. ”

These are weasel words. An accusation can be credible - and unjustified. Was he guilty, or not ? Or has he simply been a scapegoat, sacrificed to the fury of the mob by bishops anxious to save their own skins ?

My opinion of the CC is now so low that there is no infamy, and no injustice or evil, that I would put past its rulers. And I would not be surprised if others have an equally low opinion of them.

Unfortunately the cat is out of the bag; trust has been lost, so it is not even credible to suggest that "such involvement is a practical certainty even if not formally mandated." The only way to reestablish trust is to mandate oversight by the Laity. Another problem remains with the continued redirecting of the discussion solely towards the pedophile problem, as if this were the only administrative failure. For the Bishops to reestablish trust they are going to have to talk to the Laity - in a two way conversation. Until that happens there will not be progress.

I agree, I would like to forgive and move on but I can’t. I just don’t see these Bishops given up Power to any Laity Watch Group.

I agree, I would like to forgive and move on but I can’t. I just don’t see these Bishops given up Power to any Laity Watch Group.

Much like governments, local, state, and federal entities have independent oversight boards or inspectors general is what the bishops need. I do not believe at this point they do not have the credibility to police themselves. Most institutions are not able to do this thoroughly or well. It ends up in another coverup and disappointment. I don't think the divine element of the Church is enough to protect it from the all too human side.

Agree that temptation and evil will always be with us and we need to develop organizational and management strategies that minimize the risk of wrongdoing. The latest Washington Post article of the events in the Diocese of West Virginia confirm that changes are needed in the management and oversight of Dioceses. The article pointed out that repeated warnings were provided at many levels that went unheeded for many years.
So how do you establish accountability and oversight? It involves first and foremost a strong partnership among laity, religious, and clerics in managing and administering dioceses. This goes beyond trying to prevent youth sexual abuse, as important that in itself is the to the Church and it’s people. The entire governance model of dioceses needs reform.

Not only is there a failure to require oversight by the laity, but a failure to address the root cause: clericalism. The training of seminarians emphasizes their “specialness” and “unique call” and leads them to think of themselves as different from (better than) the laity. This twisted mindset produces a sense of royalty and power that separates priesthood from the people of God. And too much of the laity buys into the creed of clericalism (yes, Father, whatever you say, Father). Until clericalism is addressed and rooted out, nothing will change. James Carroll provides an excellent critique of clericalism in the June issue of The Atlantic. https://www.theatlantic.com/magazine/archive/2019/06/to-save-the-church-dismantle-the-priesthood/588073/

Editors have it backwards. It should be "Verify then trust".

Interesting that this article sports, at its head, the face of Cardinal Dinardo, the Archbishop of Galveston-Houston, whose chancellery offices were raided by the Texas Rangers, around the time that he claimed that a mere miniscule number of priests in his archdiocese were guilty of sexual abuse during more than a half-century. Nobody in Houston believes that, and, obviously, law enforcement in Texas doesn't believe it, either. Dinardo is one of that significantly large group of American hierarchs who would rather pass the priest-abuse scandal off as a phenomenon of sexual orientation amongst the clerical caste, rather than a problem with clericalism itself, as well as with the Church's failure to minister properly and humanely to the "same-sex-attracted." In fact, Dinardo's viciously un-Christian character is amply manifested by his threats to remove pensions and health insurance from retired clergy in his archdiocese who might dare to say mass for lgbtq groups who are devout Catholics.