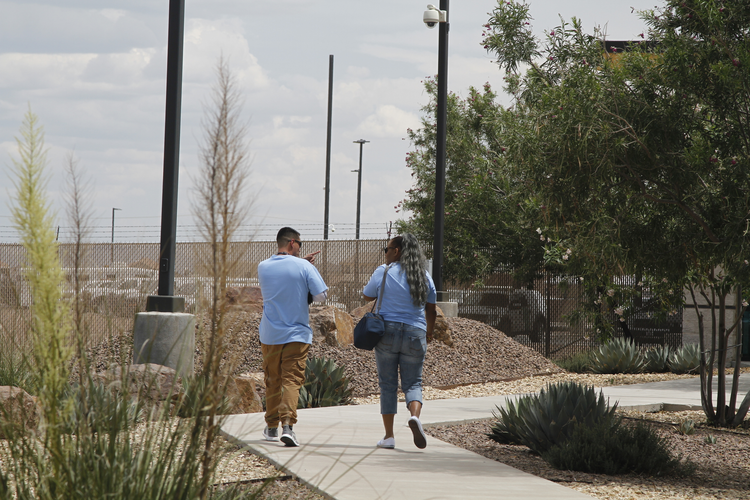 Two Border Patrol sub-contractors, "monitors," brought for the first time to care for children walk outside at the Border Patrol station, Wednesday, June 26, 2019, in Clint, Texas. The decision to hire monitors for the facility followed revelations by lawyers who interviewed dozens of immigrant children who told them about Border Patrol agents who deputized older children to care for younger children. (AP Photo/Cedar Attanasio)

Doctors and lawyers who visited the facilities in recent weeks outlined several damning examples in a court filing late Wednesday that puts more pressure on the Trump administration to improve conditions for immigrant children. Lawyers are also asking for the prompt release of children to parents and close relatives and for the government to be found in contempt of court.

In one account, the court filing describes how five infants were admitted to a neonatal intensive care unit at a local hospital after a doctor visited a Customs and Border Protection facility in McAllen, Texas.

Dr. Dolly Lucio Sevier, a pediatrician who met nearly 40 immigrant children at the facility on June 15, said in a declaration filed to the court that the conditions there were dire, describing "extreme cold temperatures, lights on 24 hours a day, no adequate access to medical care, basic sanitation, water, or adequate food." She said there are several teen mothers at the facility.

"It is obvious that the dignity and well-being of children is not even an afterthought in the design of the center," she wrote.

In another declaration, a 16-year-old girl from Honduras recounted how she and her 8-month old daughter were placed in a facility where they couldn't shower for eight days.

The girl said her daughter ran a high fever and was given medicine but began vomiting and had diarrhea the next day. She said she asked to see a doctor, but wasn't taken. "The guard said, 'She doesn't have the face of a sick baby,'" the girl recalled, adding that her daughter has since lost so much weight her pants are loose.

The Trump administration is facing growing backlash over its handling of a surge in immigrant families and children at the border. Five children have died since late last year after being detained by the government, and lawyers who visited a Border Patrol station near El Paso last week described kids living in squalid conditions with little care and inadequate food, water and sanitation.

"It is obvious that the dignity and well-being of children is not even an afterthought in the design of the center."

They met one sick 2-year-old boy without a diaper who had wet his pants, his shirt smeared in mucus. In another Texas border facility this month, a 17-year-old Guatemalan girl was seen in a wheelchair with a premature baby who advocates said should have been in the hospital. The mother had been at the facility for nine days when advocates found her.

Customs and Border Protection officials insist that children at the facility in Clint, Texas, are receiving good care, and they provided a rare tour of the station to journalists on Wednesday.

Migrant children being housed there were being watched by hallway monitors. Children appeared to be wearing clean clothes, and at least a half dozen hallway monitors were brought in to help watch the 117 children being kept there — less than half the number of young migrants who were crammed into the facility last week.

The children were housed in an industrial garage filled with bunk beds, or in cells with bunk beds and cots that included a bathroom area separated by a cinder block partition. The doors were left unlocked and the kids were free to move around.

"Not ideal, but what we had to do," Matt Harris, the Border Patrol agent in charge of the facility, said about adapting the space that was originally designed to hold adults.

The building still doesn't have a proper kitchen, and the only warm meals were ones that could be cooked in a microwave. Journalists touring the building saw stacks of instant oatmeal and instant noodles. Officials said the children also were being served burritos, and had unlimited access to snacks.

Mostly, the children sat together in the cells, singing songs, talking and at least in one instance, braiding each other's hair. In the garage, a group of boys kicked around a soccer ball.

U.S. agencies have been scrambling to find adequate facilities for migrants streaming across the border with Mexico, and the Border Patrol has been detaining some children for weeks as opposed to the court-mandated 72 hours, because the U.S. Department Health and Human Services said it doesn't have the capacity to take them.

But records obtained by The Associated Press showed that Health and Human Services had at least 500 beds available as the children languished last week in the Clint facility. The records show that the agency had beds available in facilities in several states, including Texas, Arizona, and California.

The system remains close to full, at around 94% capacity in the most recent records provided to AP. In a statement, the agency said it was "virtually impossible" for the department to reach 100% capacity because certain beds are set aside for certain age groups or classes of children.

"I can only hope that the public outcry from hearing about sick babies and toddlers deprived of soap, food and blankets — and children being denied emergency medical attention after getting sick from squalid conditions — will force change."

Harris said children have been staying at the Clint facility an average of six to 10 days, and in some instances for as long as 30 days. And the facility, which was originally designed to hold a little over 100 people, at one point this year was housing 700 children, he added.

"This is not a detention center. It's a holding area," said Aaron Hull, chief of the El Paso Border Patrol sector.

Last year, Border Patrol spent a little more than $1,000 a day on supplies for migrants being held across the Border Patrol's El Paso sector, Hull said. This year, because of the ballooning number of migrants and the backlog, the agency is spending $4,000 a day just to buy enough food, medicines and other supplies to keep the Clint facility operating. Across the El Paso sector, the cost has risen to $61,000 a day.

In the court filings, lawyers said children are being denied soap and showers and flu is spreading through the facilities. Some haven't brushed their teeth for days or weeks and are still wearing the same dirty clothes they used to cross the border weeks before.

The legal case over the detention of immigrant children dates back decades. Advocates reached a settlement with the U.S. government in 1997 that has set the rules for custody conditions ever since.

"I can only hope that the public outcry from hearing about sick babies and toddlers deprived of soap, food and blankets — and children being denied emergency medical attention after getting sick from squalid conditions — will force change," said Leecia Welch, senior director of legal advocacy and child welfare at the National Center for Youth Law.

Nomaan Merchant in Houston, Texas, contributed to this story.

a 16 yr old girl with an 8mos old baby??!! did she have the baby in the holding center or did she lug it all the way thru Mexico to the border?
Is there no responsible person left south of the border that allows this kind of child abuse to happen? when are the southern countries going to get the message that getting into America is very difficult? Where are the fathers of these babies? Why is it always America's fault that people make irresponsible decisions about their lives?

It is disgraceful to use children as hostages for incompetence. Every child, like every person has a story and many would be heartbreaking, but what I find unsettling in the extreme is that a rich country would be brought to a standstill on an issue through hatred, jealousy and incompetence. Until immigrants from the south see that is is not worth their while to try an illegal crossing - the disaster will continue. For a congress to sit on their hands - for years in the name of politics is disgraceful.