‘A drink of water could save a life.’ What Catholic social teaching says about the No More Deaths trial 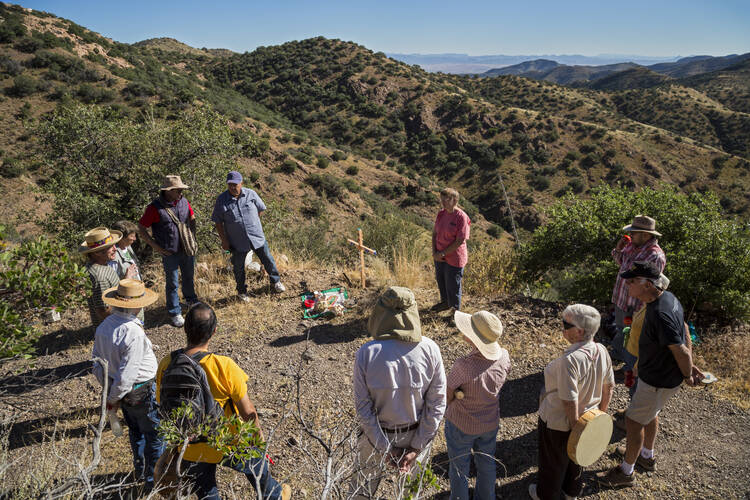 Members of the School Sisters of Notre Dame and their supporters pray at a cross they put in the ground Oct. 14 in Mule Mountains near the spot where the remains of an unidentified migrant were found in Bisbee, Ariz. Hundreds of migrants from Mexico and Central America have perished in recent years as they tried to evade U.S. Border Patrol checkpoints. (CNS photo/Jim West)

On June 11, a jury in Tucson, Ariz., could not reach a verdict on whether or not Scott Warren, a high school geography teacher and humanitarian aid worker for the advocacy group No More Deaths, was guilty of aiding two migrants who had illegally crossed the border. Mr. Warren was arrested in early 2018 when he gave Kristian Perez Villanueva and José Sacaria Goday food, water and shelter while also allegedly providing directions on how to avoid U.S. Border Patrol checkpoints. A decision on whether or not prosecutors will seek a retrial should occur by July 2.

This is not the first time a member of No More Deaths has been targeted by the Border Patrol, said No More Deaths staff member Justine Orlovsky-Schnitzler. In both 2005 and 2017, a member of the group was charged for transporting migrants, though in both of those cases, the charges were eventually dropped. She called the case against Mr. Warren this year “the escalation of a legal battle, like the U.S. government is trying to make an example of Scott.” She sees the trial as another expression of the Trump administration’s hostility toward migrants at the border.

No More Deaths regularly places jugs of water and food in highly traveled areas in the Sonoran Desert in Arizona for migrants. “Sometimes, a drink of water could save a life,” Ms. Orlovsky-Schnitzler said.

She called the case against Mr. Warren this year “the escalation of a legal battle, like the U.S. government is trying to make an example of Scott.”

America reached out to U.S. Customs and Border Protection, but the agency declined to comment on Mr. Warren’s case. A C.B.P. spokesperson did reply via email that in 2012 the chief of the Tucson Sector Border Patrol officially directed agents not to tamper with, vandalize or otherwise damage water stations. “The Tucson Sector has always maintained an open dialogue with the various faith-based and humanitarian organizations in southern Arizona,” the C.B.P. spokesperson said. “We share the view that crossing the border illegally should not be a death sentence. Unfortunately, the criminal organizations that smuggle humans and narcotics into the United States do not value human life, and migrants can often find themselves in a perilous situation.”

The C.B.P. statement did not address the consequences of assisting migrants.

The Rev. Alison Harrington, pastor of Southside Presbyerian Church and community member of No More Deaths, said that there is wide support for No More Deaths’ humanitarian work in Tucson. She helped organize an interfaith gathering on June 5 called Faith Floods the Courtroom, which filled the courtroom with clergy from a variety of faiths. “It was a time for religious leaders to show up and support Scott Warren,” she said. “It was also to make clear that we understand humanitarian aid to be a moral obligation and, frankly, a requirement of our faith.”

Ms. Harrington, who attended the trial, described an instance where the prosecution asked Mr. Warren whether or not he gave the migrants food or water. “These were questions that, if answered affirmatively, would be a criminal act,” she said. “For those of us who are Christians, these words echo so clearly the words of Christ from Matthew 25. For us, an affirmative answer means salvation.”

The question of a faith response to issues at the border has been on the mind of leaders in the Catholic community as well. At the 2019 U.S. Conference of Catholic Bishops’ General Assembly in Baltimore, Md., the Working Group on Immigration led by Archbishop José Gómez and Bishop Joe Vásquez presented their findings. The bishops reported a marked increase in migrants crossing the U.S.-Mexico border despite the Trump administration’s heavy focus on enforcement-only policies regarding migration—from 58,000 individual arrivals in January 2019 to 144,000 in May. A greater concern was an increase in family arrivals, including women and children, which jumped from 53,205 in March to 84,542 in May.

In a statement made on Oct. 6 of last year, Bishop Vásquez said, “Resettlement in our country is a way through which we live out our Gospel call to welcome the persecuted into our communities—individuals and families with no viable options to stay where they are or return home.”

At the panel for the Working Group on Immigration, Bishop Edward Weisenburger of Tucson, where No More Deaths makes its home, said, “There seems to be two paradigms when we speak about immigration issues. One is the political paradigm. The other, which I find is emerging more and more, is that of humanitarian crisis. I think there are those in the secular world who are really wanting to keep the focus on the political paradigm… I think the more authentic paradigm is the humanitarian crisis.”

“Resettlement in our country is a way through which we live out our Gospel call to welcome the persecuted into our communities—individuals and families with no viable options to stay where they are or return home.”

These two paradigms have come into conflict before in the world of Catholic social teaching, which affirms both the right of state sovereignty and the right to migrate. In the 2003 pastoral letter “Strangers No Longer,” the bishops of the United States and Mexico tackled this issue.

Daniel Cosacchi, a religious studies professor at Fairfield University, said that three important principles emerged from this letter. The first is the right for people to migrate to ensure the safety of their lives and, in particular, the lives of their children. The second is the right for a country to regulate its own borders and maintain sovereignty. The third is that countries should respect the human dignity of migrants.

“When they exercise their sovereignty, they have to do it with justice and mercy,” Mr. Cosacchi said. “The federal government only really recognizes the second principle. Catholic social teaching is much more complex than that.”

He criticized Mr. Warren’s prosecutors for wanting to punish him for adhering to Christian principles by giving out food and water. “Human dignity is so fundamental to what Catholic social teaching is all about. This is a person who is being prosecuted for upholding human dignity.”

Brianne Jacobs, an assistant professor of theology at Emmanuel College, said, “Basically, every principle of Catholic social teaching is being violated in the ways that the aid workers are being prosecuted and in the way that the border in general is being regulated.” She affirmed the importance of solidarity with migrants. “Scaring people from treating migrants as human beings is a violation of Catholic social teaching.”

“Scaring people from treating migrants as human beings is a violation of Catholic social teaching.”

An estimated 7,000 have died attempting to cross into the United States through Arizona over the last 20 years, according to the Border Patrol. Leo Guardado, assistant professor of theology at Fordham University and himself a migrant from El Salvador, said that “part of what’s at stake at the border is not so much the legality, but the humanity [of it].”

He recently wrote a paper for the Catholic Theological Society of America titled “Reimagining Community in the Shadow of Empire” where he criticized the treatment of No More Deaths and Mr. Warren. In the paper, he wrote, “Scott Warren’s trial is an illustration of the contestation of humanity and of the church’s participation in humanizing ministries, which have been increasingly targeted these past two years.”

“I think we need different frameworks for what’s going on at the border and across the world,” Mr. Guardado said. “We live in a globalized age. Yes, we have borders. Yes, we live in nation-states…. [T]his is where Catholic social teaching needs to create more room to think past the nation-state. If we think of ourselves as a global church, as a church that is not divided by nation-state boundaries, then we need to start acting like one.

“People die while we talk,” he said. “The church as the people of God are at the frontline of it…. [H]ow many [church leaders] are willing to embody the societal glimpses of the future they keep mentioning?

“What does it mean to embody the Gospel at the border?”

The Arizona Daily Star published this letter a week or so ago.
Re: the June 12 article 'Hung jury prompts mistrial in case of border aid worker.'
In the matter of the United States v. Scott Warren, I would ask the United States Attorney's Office whether the Justice Manual standard for prosecution had been followed, and whether its application would be undertaken anew prior to deciding whether to put Warren through a second trial.
That standard is pretty straightforward: Does the conduct constitute a crime; if so, would admissible evidence probably be sufficient to obtain and sustain a conviction; would prosecution serve a substantial federal interest that could not be adequately served by prosecution elsewhere or through non-criminal alternatives. (Justice Manual 9-27.220) Please, no more trials for No More Deaths in the absence of pretty overwhelming evidence of criminal intent and activity, which seem clearly to have been lacking on the part of Warren. The current U.S. attorney, Michael Bailey, was nominated by President Trump in February, and confirmed by the Senate on May 23, 2019.
This hot potato is on his plate now.
Frank Bergen

What blame for the hardships including death experienced by the migrants are due to those who encourage them to come and help them? What about the ones left behind?

The migrants wouldn't be desperate for food, water, and shelter if they applied for entry to the United States in their own countries. The Church and its members with compassionate intentions should look to our own citizens who are also needy, and more deserving of their assistance.

"should look to our own citizens who are also needy, and more deserving of their assistance." - You should probably reread your Bible. Particularly the "Good Samaritan." Xenophobia and isolationism has never worked, and its roots have always been racism.