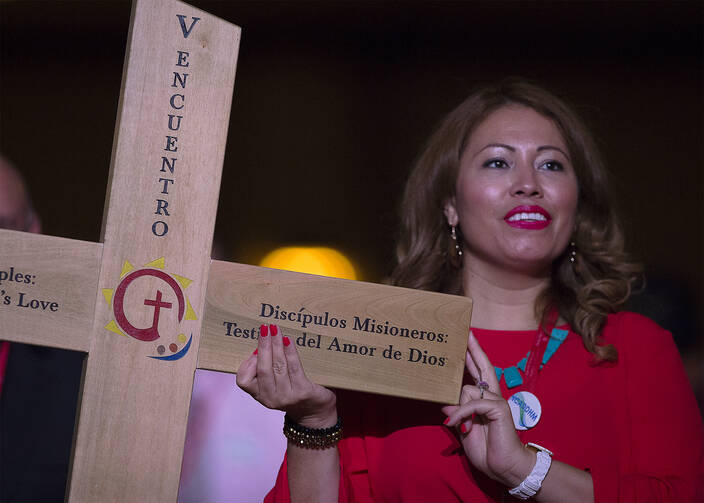 A delegate from Region 4 – California, Nevada and Hawaii – carries the Encuentro cross Sept. 20 at the start of the Fifth National Encuentro, or V Encuentro, in Grapevine, Texas. The Sept. 20-23 event is a gathering of more than 3,200 Hispanic Catholic leaders and about 125 bishops from across the country. (CNS photo/Tyler Orsburn)

An estimated 3,500 Catholic leaders from throughout the United States received a special message from Pope Francis last night, albeit a prerecorded one.

In a video message, the Holy Father encouraged those gathered for the V Encuentro national gathering in Grapevine, Tex., to “tear down walls and build bridges.” The U.S. bishops initiated the Encuentro, which means “Encounter,” to better serve the growing Latin American community. The process will continue through 2020.

“Through this V Encuentro process, you can promote a culture of encounter,” Pope Francis said. “It is a concrete way to move beyond our comfort zones and look for those who need hope in their lives, especially young people and those who are on the peripheries.”

V Encuentro participants throughout the country have gone out and knocked on doors in neighborhoods to listen to what people had to say. They encountered many young U.S. Latinos who have left the church. “I hope this V Encuentro process continues to give fruit,” Pope Francis said.

“Through this V Encuentro process, you can promote a culture of encounter,” Pope Francis said.

“For the pope, missionary discipleship begins with an encounter with Christ,” Archbishop Christophe Pierre, apostolic nuncio to the United States, said in his bilingual remarks. “We have come together to encounter the Christ that gives meaning to our lives. Once we have encountered him, we will share him with those we encounter.”

Around 40 percent of Catholics in the United States are Latino, Archbishop Pierre said. Some see these “brothers and sisters as a threat rather than as members of the family.” Amid the shifting demographics, the church is called to discernment and patience, he said.

“Pope Francis dreams of a church that is missionary and goes out to meet those on the existential and spiritual peripheries,” the archbishop said. “As we come together, we do so with the hope that we may be the church Christ wants us to be.”

Archbishop Gustavo García-Siller of San Antonio, Tex., encouraged participants to open their hearts to the Holy Spirit in his remarks to the thousands gathered at the Gaylord Convention Center. Between speakers, Catholic leaders joined in praise with singing, clapping and dancing.

“The Holy Spirit comes to wake us up and inflame our hearts with a renewed love for God,” he said. “We must not be afraid. The Lord will be present with us. He is the crucified one, but he is the risen one, too.”

Around 40 percent of Catholics in the United States are Latino.

Archbishop García-Siller challenged participants to live their lives “for the risen Lord.” “We are the present and the future of the church,” he said.

Amid the celebration, Archbishop García-Siller acknowledged the sexual abuse scandal brought to light by the Pennsylvania grand jury report and revelations about Archbishop Theodore McCarrick.

“You are right to be broken-hearted by the faults of your shepherds,” he said. “Let us pray to God for the victims of the crimes of this crisis. Do all you can for the victims. Pray also for the perpetrators and for us your bishops.”

Cardinal Daniel DiNardo, the archbishop of Galveston-Houston and president of the U.S. Conference of Catholic Bishops, also acknowledged the sexual abuse crisis.

“As bishops, we have fallen short of what has been expected of us,” he said. “Amid this darkness, the Encuentro is a light. May it be a means of grace, a gift to us as we renew the church.”

Sister of Mercy Ana María Pineda, an associate professor at Santa Clara University and a founding member of the Hispanic Theological Initiative, shared a reflection on the history of the Encuentro project, which began in 1972.

Subsequent Encuentros in 1977 and 1985 helped the church better discern its changing demographics. The fourth Encuentro, or Encuentro 2000, celebrated the contributions of the many cultures that make up the U.S. Church.

“Once again God remembers us,” Sister Pineda said of the V Encuentro. “Today we once again claim who we are.”

In the days to come, participants will take part in regional breakout sessions and listen to influential leaders of the church. Keynotes will focus on getting involved in the church, accompaniment and young adult Catholics. The national gathering will conclude with a Mass on Sunday.