Pope Francis: “Me first” logic is not Christian in response to migrants and refugees 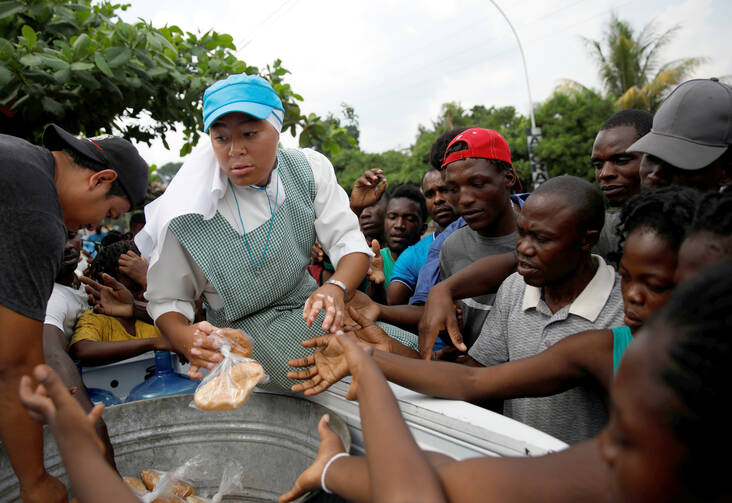 A member of the Missionaries of the Risen Christ provides migrants with food in Tapachula, Mexico, May 11, 2019. Some African and Haitian migrants have been stranded in southern Mexico for two months. (CNS photo/Andres Martinez Casares, Reuters)

Acting as advocate for the 260 million migrants and refugees worldwide who are fleeing from violence, war and poverty, Pope Francis pulled no punches in a message released today by the Vatican. In it, he makes crystal clear that the logic of “me first and then the others,” sometimes cited by believers and frequently used by politicians to gain votes and power in European countries, the United States and elsewhere, is not the logic of Christ.

“Jesus Christ asks us not to yield to the logic of the world, which justifies injustice to others for my own gain or that of my group, [by declaring] “me first, and then the others!” Pope Francis said in his Message for the World Day of Migrants and Refugees that will be celebrated throughout the Catholic church on Sept. 29. He reminded his global audience that “the true motto of the Christian is: ‘The last shall be first.’”

He explained that “an individualistic spirit” as expressed in the “me first” logic “is fertile soil for the growth of that kind of indifference towards our neighbors which leads to viewing them in purely economic terms, to a lack of concern for their humanity and ultimately to feelings of fear and cynicism.” Moreover, it finds expression in “the attitudes we often adopt towards the poor, the marginalized and the ‘least’ of society” and “in particular to migrants.”

“The most economically advanced societies are witnessing a growing trend towards extreme individualism,” the pope said, “which, combined with a utilitarian mentality and reinforced by the media, is producing a ‘globalization of indifference.’” In this scenario, he said, “migrants, refugees, displaced persons and victims of trafficking have become emblems of exclusion,” and, in addition to the hardships that their condition entails, “they are often looked down upon and considered the source of all society’s ills.”

Pope Francis: “The problem is not that we have doubts and fears. The problem is when they condition our way of thinking and acting to the point of making us intolerant, closed and perhaps even—without realizing it—racist.”

He said, “That attitude is an alarm bell warning of the moral decline we will face if we continue to give ground to the throw-away culture,” and, he warned that “if it continues, anyone who does not fall within the accepted norms of physical, mental and social well-being is at risk of marginalization and exclusion.”

The Vatican released the pope’s message on the morning after the results of the elections for the European Union parliament by electors in its 28 member states were made known. Populist parties did not have the great success they had hoped for across the old continent. but right-wing political parties that are taking a strong stance against migration gained considerable success. They came first in such majority Catholic countries as Italy, France, Hungary and Poland. In Italy, for example, 34.3 percent of the electors voted for the xenophobic-right wing Lega Nord led by Matteo Salvini, who brandished a rosary beads at his closing rally and in his victory celebration.

Pope Francis’ message was presented at a Vatican press conference by the two undersecretaries that he appointed to head the special unit in the Roman Curia for Refugees and Migrants: Fathers Fabbio Baggio, a Scalabrini missionary, and Michael Czerny, a Jesuit. They said that Francis chose as the title of his message the words “It is not just about migrants” because he wished to highlight the fact that “the person who knocks at our door is Jesus himself.”

They explained that the message is elaborated around seven subthemes that relate to “our fears” about migration: “charity,” “our humanity,” “seeing that no one is excluded,” “putting the last in the first place,” “all people” and “building the city of God and man.”

Pope Francis tells the press: ‘The church is on your side,’ denounces fake news
Gerard O’Connell

Many politicians today exploit people’s fears of migrants, the media tends to magnify those fears, and in his message, Pope Francis addressed this reality. He said, “The signs of meanness we see around us heighten our fear of ‘the other,’ the unknown, the marginalized, the foreigner” and this happens especially “when faced with the arrival of migrants and refugees knocking on our door in search of protection, security and a better future.”

He acknowledged that “to some extent, the fear is legitimate...because the preparation for this encounter is lacking,” but he said, “the problem is not that we have doubts and fears. The problem is when they condition our way of thinking and acting to the point of making us intolerant, closed and perhaps even—without realizing it—racist.” In this way, he said, “fear deprives us of the desire and the ability to encounter the other, the person different from myself; it deprives me of an opportunity to encounter the Lord.”

He emphasized that the presence of migrants and refugees and of vulnerable people in general, “is an invitation to recover some of those essential dimensions of our Christian existence and our humanity that risk being overlooked in a prosperous society.” In taking care of them, he said, “we all grow; in listening to them, we also give voice to a part of ourselves that we may keep hidden because it is not well regarded nowadays,” such as “compassion” which “strikes the most sensitive chords of our humanity.”

Why did the New Jerusalem in Revelations have a wall on four sides? (Described in reading at Mass yesterday) It has gates to let people pass but not all, otherwise there would not have been walls.
Second point. Article mentioned 260 million. Does not everyone think the number is much higher? Pope has no plan for these people. If he does I would be interested in what it is.

A bad analogy is easy to find but brings no enlightenment.

It is not the Pope's job to supplant the secular authorities. He is perhaps responsible for remembering to us what Jesus taught. I think he is a prudential man who recognizes that there are limits even to charity.

I’m looking for honesty. Hard to find it when most on one side of discussion avoid it. There can be no solution without the truth.

Thanks for posting such a beautiful and logical article. I love those words “Jesus Christ asks us not to yield to the logic of the world, which justifies injustice to others for my own gain or that of my group, [by declaring] “me first, and then the others!” Pope Francis said. Keep
[url=https://cyberlinkmultimediasuite.wordpress.com/] hostgator renewal coupon[/url] working hard like this and give us some good stuff regularly.

Will a single sentiment or thought of what Francis says be uttered in a sermon in every Catholic church in the United States? I think not.

Let me bore you with my constant refrain:

Ironically, the vast majority of Catholics in this country will never know nor hear a single word of what Francis says. They don’t read newspapers or periodicals, secular or Catholic. They don’t listen to media news, and if they do, Francis’ words on topics like these are not usually covered there. They read their church bulletins while priests give their homilies; neither the bulletins nor homilies relate what Francis preaches.

The first step to convincing Catholics that the “last” must be “first” is to inform them! God help us.

LOL! "Me First" is the ideology of the illegal aliens who care nothing about justice or laws, only them$elves. Illegal alien "labor" is more despicable than scab labor was to honest families that were striking for justice in wages back in the Depression. The illegals will UNDERCUT their fellow man, and then take freebies to make up the gap. Such deceit.