Pope Francis tells the press: ‘The church is on your side,’ denounces fake news 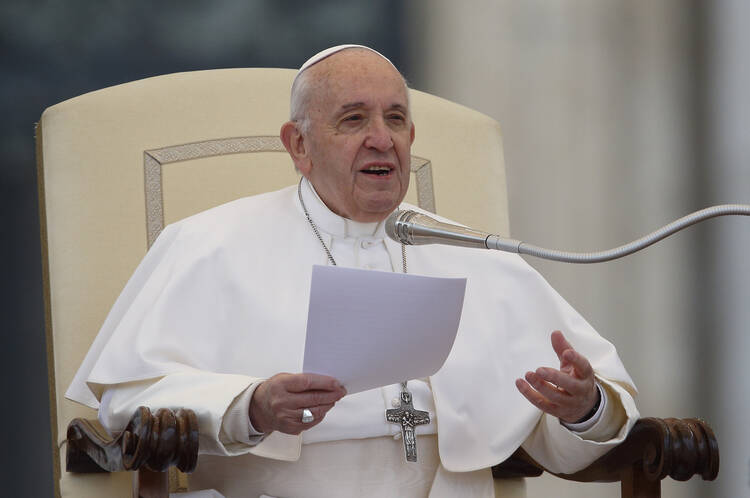 “Freedom of the press and of expression is an important index of the health of a country,” Pope Francis told members of the Foreign Press Association in Italy, when he received them and their families in private audience in the Vatican on May 18. He reminded them that “one of the first things that dictators do is to remove the freedom of the press.”

He assured them, “I esteem your work; the church esteems your work even when you put the finger in the wound, and perhaps the wound that is in the ecclesial community.”  He quoted John Paul II in support of the press. “The church is on your side,” he said. “Whether you are Christian or not, you will always find in the church the just esteem for your work and the recognition of the freedom of the press.”

Ms. Patricia Thomas, the president of the Foreign Press Association, told him that its 400 members come from 54 countries and profess different faiths. She recalled how their work has changed radically with the advent of the internet and social media, and noted that today there is much greater risk of “disinformation” and the “spread of hate.” She said that the task of journalists is to combat “the wave of hate” and “fake news,” and to report on the plight of refugees and migrants. She recalled that many journalists run great personal risk from authoritarian governments and as they report on wars and violence. Ms. Thomas mentioned three journalists who had been killed recently because of their courageous work: Lyra McKee from Northern Ireland, Daphne Anne Caruana Galizia from Malta and Jamal Khashoggi from Saudi Arabia.

Pope Francis said he had listened to Ms. Thomas’ report “with pain” about the journalists who have suffered or been killed while they did their work, informing the world of what is happening in wars and other dramatic situations, and he encouraged them also to report on “the forgotten wars,” the ones that society ignores. Then addressing the dangers and threats they often face from governments, Francis declared: “Freedom of the press and of expression is an important index of the health of a country.”

Recalling that Ms. Thomas had said the Foreign Press Association has its office on Via del Umiltà, he told them: “humility can be the keystone of your work.” He described how much easier it is to accept superficial answers and not ask the hard questions, and said “the presumption of knowing everything already” blocks that search.

Pope Francis noted that journalism can be a vehicle for good works when done well. But he also described how, “if one is not attentive and scrupulous, one can also do harm to the neighbor and at times to the whole community.” He noted how some headlines distort reality and emphasized the importance of correcting mistakes. Francis said journalists should always be aware of “the power of the instrument” at their disposal “and resist the temptation to publish news that is not sufficiently verified.”

Pope Francis connected the virtue of humility with fair and well-reported journalism. He said, “the humble journalist seeks to understand the facts correctly in their entirety before reporting and commenting on them.” He advised them also “not to construct stereotypes” and not to be content with “convenient representations” of persons “as if they are capable of resolving all problems, or on the contrary as scapegoats, on whom to throw all responsibility.”

Pope Francis also encouraged journalists to avoid inflammatory language while “especially in the social media but not only, many use violence and derogatory language, with words that wound and at times destroy persons.”

He said that “hostile words” often overlook the dignity of the people they refer to. When “to speak evil of others has become a habit for many,” he said, “one must always remember that every person has his/her intangible dignity, which can never be taken away.”

Pope Francis told his international audience that “the humble and free journalist should seek to report the good, even if it is often evil that makes the news.” He confided that in his many years as bishop he was witness to much good news.

“I have discovered how much good exists among young, how many people sacrifice themselves, even heroically, to assist a parent, a sick child, how many persons commit themselves every day in the service of others, how many reach out a hand instead of looking the other way.”

“There is an ocean of good that merits to be known and that gives strength to our hope.” He said that women are often more attentive to this than men because “they see better, the understand better, they feel these things better.” He praised the fact there were so many women journalists in the Foreign Press Association.

The pope concluded his address by appealing to the journalists to report this good news. “I beg you, continue to report also that part of reality which thanks be to God is still the most widespread: the reality that does not give-in to indifference, that does not flee in front of injustice, but builds with patience in silence.”

It seems that there are forces (what source?) that try very hard to distort and attack all or most articles in America. I wonder why and who behind them?

About Jamal Khashoggi – He was the columnist for Washington Post and he wrote many articles criticizing the Saudi royal family especially the crown prince MSB – Mohammad bin Salman.

Jamal was a member of the press and had the courage to speak up the truth about the wrongdoings of MSB. By doing so, he was mercilessly and cruelly killed/assassinated by MSB.

Why are you so picky about the title - journalist, reporter, columnist, press member, etc.? Are you afraid of the truth because you are so heavily invested in fake news to justify your position?

attack all or most articles in America. I wonder why and who behind them?

The Jesuits of old are behind the alternative points of view. The positions taken and methods used here would make the old Jesuits cringe. I don't believe it's near all or most but definitely most political articles are badly reasoned and should be challenged.

It’s not “pickiness”—it’s accuracy of title—journalists and reporters seek the truth and the facts in covering a story—propagandists like Khashoggi do not.
And it disgraces the names of the real journalists, who risk and lose their lives in search of accuracy in their reporting, to have a propagandist, who ran afoul of his former employers while serving the agenda of his new masters, mentioned in the same way and honored as a hero.
Let the Joseph Goebbels School of Journalism name a building after this “journalist.”

Mr. Fang, the “forces” perhaps intend to put democracy in chains. Years ago, a prominent paper never stopped investigating who a noted politician was and what he wanted, and the politician never stopped hating them for it. Eventually the paper was “legally” shut down.

I digress, but, remember Marshall McLuhan’s “the medium is the message”? In McLuhan’s context, the twitterer-in-chief has twittered a legacy of historic proportion.

Journalists have an important role to play in world-building.

Fake News is in the eye of The Beholder !

Mike, deliberate disinformation or intentional omission of important and relevant facts is commonly referred to as "fake news" and it certainly exist. The "dictatorship of relativism" relies on statements like "to each his own" or "in the eye of the beholder". But this isn't helpful to a well informed Catholic discussion. Relativism would suggests that the divinity of Jesus or his real presence in the Eucharist is in the eye of the beholder as well? Common man, the Catholic Church does not support relativism? For your reading pleasure... https://www.ncronline.org/blogs/ncr-today/benedict-battles-dictatorship-relativism

These are indeed wise words from Pope Francis, and Mr O’Connell provides us with a nicely reported summary
Thanks