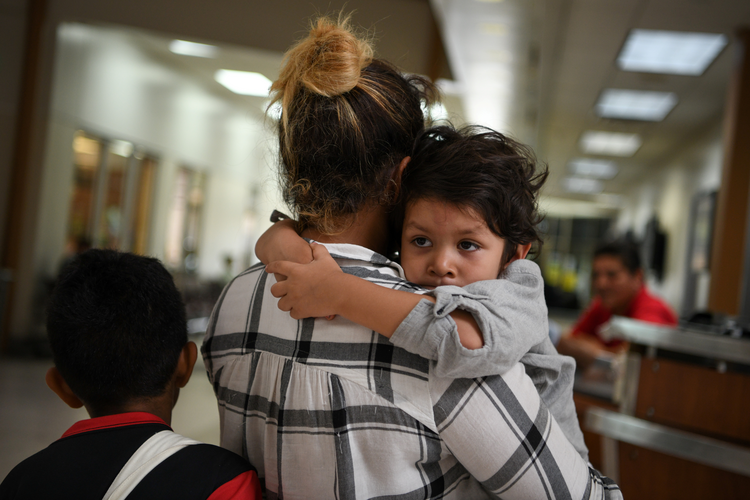 A Honduran asylum seeker released from detention holds her son while waiting at a bus depot in McAllen, Texas, on May 19. (CNS photo/Loren Elliott, Reuters)

For the last two weeks, the six-person staff of Catholic Charities of the Diocese of Laredo, Tex., has been receiving more than 300 families a day seeking asylum in the United States. U.S. Customs and Border Protection agents regularly drop off 150 to 200 asylum seekers between 11 a.m. and 1 p.m., and the same number again between 4 and 6 p.m.

“So far, it’s working. But we don’t have the capacity, so everything has to be on time,” said Benjamin de la Garza, the executive director of Catholic Charities in the border city. That arrangement came together after he took a meeting on May 9 with immigration enforcement officials, requested by the Border Patrol. Federal detention centers in Laredo are at capacity, so U.S. Customs and Border Protection have been releasing families regularly.

“Hundreds, if not thousands, of people would be homeless” if Catholic Charities did not receive them, Mr. de la Garza said. “These families, all they come with are the clothes on their back.”

“Hundreds, if not thousands, of people would be homeless” if Catholic Charities did not receive them. “These families, all they come with are the clothes on their back.”

Asylum seekers must pass a “credible fear” screening before they are released by immigration officials. According to the United Nations’ 1951 Refugee Convention, migrants can apply for asylum if they have a well-founded fear of persecution in their native country due to race, religion, nationality, membership in a particular social group or political opinion. Of those who pass the initial screening, some asylum seekers are released from detention but must appear before an immigration judge at a later date.

“If they have a little piece of land, it’s taken from them by gangs,” he said, recounting stories he has heard from the thousands who have passed through the shelter. Many have been business owners, and some had run coffee plantations until they were seized by criminal cartels. Other families told him they could not afford to feed themselves because of extortion by gangs.

By the time they arrive at the shelter, some asylum seekers have gone days without eating, according to Kristan Schlichte of Catholic Charities USA. The shelter serves easy-to-digest meals. Food that can be eaten out of a cup, like fruit cocktail, is ideal. They also serve beans and tortillas, Ms. Schlichte said.

All of the asylum seekers at the Catholic Charities shelter are families coming from Central America. They are fleeing violence, he said, but he added that the violence is connected to poverty.

All of the asylum seekers at the Catholic Charities shelter are families coming from Central America. They are fleeing violence,  but the violence is connected to poverty.

“It’s a small agency,” she said. “When I arrived there, they had bags and bags of clothes, but when I left, the clothes were totally gone.”

The shelter provides food, clothing, showers and, for some, a place to sleep for a night. Most spend less than 24 hours at the shelter before they are taken to a bus station or the airport in minibuses. Asylum seekers usually have relatives or friends already in the United States, so they travel to stay with them.

Once they arrive at the shelter, asylum seekers are assisted by volunteers in contacting their friends or relatives. The makeshift call center now consists of only four cell phones, but Mr. de la Garza said he wants to add four more.

Both Mr. de la Garza and Ms. Schlichte noted the leadership of Bishop James A. Tamayo of Laredo. “He’s given the staff a real sense of ministry, not just service,” Ms. Schlichte said. “There’s a tangible sense that the diocese sees this and owns this as service to others.”

Mr. de la Garza counts on the generosity of around 10 volunteers who come in each day, in addition to parish groups who help in the kitchen. He said the center needs to hire more staff and expects the influx of migrants to continue for the foreseeable future.

“We don’t have time to eat,” he said, noting that volunteers keep on working with a taco in their hand. Mr. de la Garza set up a health screening center and sends those in need of medical attention to nearby doctors or hospitals. Washing the sheets from 100 beds each day requires workers to visit a nearby laundromat, which is costly, so he is looking into purchasing an industrial-grade washer and dryer.

Some asylum seekers have to be at the airport by 5 a.m., so Mr. de la Garza uses his personal Uber account to arrange rides for them. Volunteers show up at the center as early as 6 a.m., and there is security at the shelter 24 hours a day.

“Thankfully, we’re getting donations of food and clothing everyday,” he said. “We use it all up. We use paper plates, toilet paper, foam cups, napkins, water, everything.” The needs change day by day, so Mr. de la Garza has begun asking people to donate WalMart gift cards, which give staff the ability to purchase what is needed.

“Once they feel comfortable, they start helping at the center,” he said of the families who arrive. “They are a humble, hard-working people. But they feel lost.”

All seeking to enter the last opportunity in a land with freedom. I would like to know what they have heard to drive them here and how they might feel about movements in America toward Socialism. Be interesting!

Received an urgent needs message from the Sisters of Mercy that they are in desperate need of so many things - FOOD (canned chicken noodle soup, pinto beans, fruit cocktail, corn tortillas, water), CLOTHING —Children and Adult—Men and Women in Small, Medium and Large (No XL), SHOES —all sizes except very large, BELTS and SHOELACES (these are taken away in the detention center) and DIAPERS —all sizes.
Any donations of goods from Amazon, Wal-Mart, etc. can be sent to:

Thank you, Susan! Donations on the way, will pass the address along.