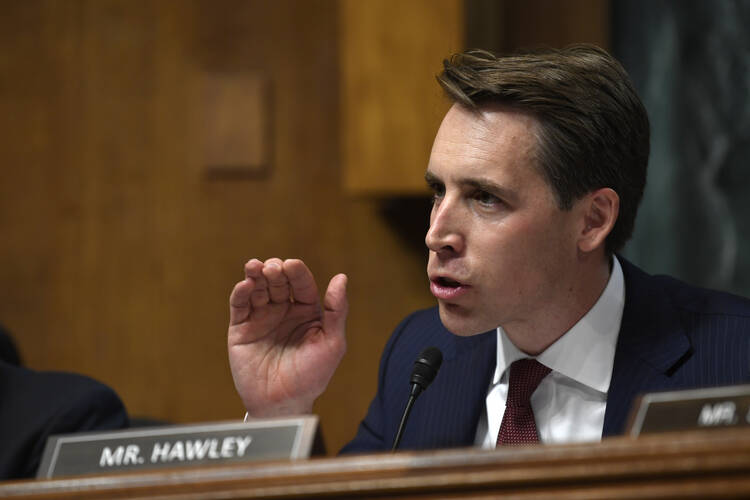 A Michigan attorney nominated by President Trump to serve as a federal judge faced tough questioning on May 22 from a senator from the president’s own party over allegations that he holds anti-Catholic views.

Senator Josh Hawley, a Republican from Missouri, questioned attorney Michael Bogren about an argument he made in 2017 on behalf of the City of East Lansing, Mich. Citing the city’s nondiscrimination policy, a local farmers market had refused to lease a stall to Steve Tennes, the owner of a farm and reception venue called Country Mill Farms.

As the city’s attorney, Mr. Bogren argued that Mr. Tennes had been in violation of the city’s nondiscrimination policy because of posts on social media in 2016 noting that Country Mill Farms would not host same-sex weddings because of Mr. Tennes’s Catholic beliefs even as it continued to accommodate heterosexual weddings.

Mr. Tennes sued the city in 2017; he was represented by the Alliance Defending Freedom, a Christian legal nonprofit that has been active in a number of high-profile religious liberty cases in recent years. Country Mill Farms had been a vendor at the farmers market for several years before it posted its wedding policy on Facebook. Despite the city’s position, a judge’s order allowed it to participate in 2017 and 2018 as the case made its way through the courts.

Although Mr. Tennes’s “discriminatory conduct is based on sincerely held religious beliefs,” Mr. Bogren wrote, it “does not insulate that conduct from anti-discrimination laws,” the Detroit Free Press reported. Noting that the Nation of Islam and the Ku Klux Klan hold views that prohibit interracial marriage, Mr. Bogren argued that followers of those belief systems would not be able to cite their religious beliefs if they ran a business and did not serve people of color.

“There can be no constitutionally sound argument that sincerely held religious beliefs would permit a secular business to avoid the prohibitions against racial discrimination or gender discrimination found in federal, state and local laws,” he wrote in his 2017 argument.

“You think that the Catholic family’s pointing out the teachings of their church is equivalent to a K.K.K. member invoking Christianity” in order to refuse service to people of color, Senator Hawley said.

Mr. Bogren interjected, telling Senator Hawley, “That is not what I said, and those are not my beliefs.” He said he wrote the arguments as an advocate for his client, East Lansing, and that because his firm still represents the city, he would not retract what he wrote.

“The fact that you stand by these comments is extraordinary to me,” Mr. Hawley said.

For his part, Mr. Bogren said, “From a legal perspective, Senator, there is no difference” between Mr. Tennes’s claim that his discriminatory business practice was protected by religious liberty laws and the hypothetical claim of a K.K.K. member who would refuse to serve nonwhite customers.”

With Republicans holding a majority of seats in the Senate, Mr. Bogren is expected to be confirmed as a judge for the federal trial court for the U.S. District of Western Michigan.

The exchange is the latest row in an intensifying debate at the federal, state and local levels about expanded civil rights for L.G.B.T. people coming into conflict with individuals and businesses that cite religious liberty as justification for not providing goods or services.

In Texas, lawmakers are advancing a bill that would protect businesses from penalties related to controversial stances on social issues based on religious beliefs. The bill is based on a vote by the San Antonio City Council that instructed a concessions operator to ban Chick-Fil-A from an airport because the owner of the fast-food chain donated money to organizations fighting against same-sex marriage.

The Tennessee state legislature is considering a bill that would allow religiously affiliated adoption agencies to refuse to serve same-sex couples, legislation modeled on measures passed in 2018 in Oklahoma and Kansas. Several local Catholic Charities adoption agencies, including locations in New York, Illinois, Massachusetts and Washington, D.C., shut down their operations in recent years rather than comply with local nondiscrimination laws.

The House of Representatives last week passed the Equality Act, a bill that would add sexual orientation and gender identity to protected categories in existing federal civil rights laws. While some Catholic leaders expressed support for the bill, the U.S. Conference of Catholic Bishops and a number of other religious leaders came out against it, arguing that it put religious liberty at risk.

I think the examination has more to do with the practice of law and the distinction between what an attorney argues in representing his client and his personal belief. We need to be reminded that attorneys are ethically bound, as well as subject to penalty under civil law for failing to represent their client to the best of their ability,regardless of their personal biases or beliefs. In many respects, it is identical to what we expect of judges with respect to ruling on the law.
I may be wrong, and you make a convincing argument with respect to recent state legislation, but too often attorney case transcripts are used to imply a bias by a candidate. Either way, it is a fascinating bit of hearing and testimony and worthy of discussion from several perspectives.

This is the guy who nightly had ads on TV that straight up lied about his stand on healthcare, swearing that he supported protecting heath care and coverage of pre-existing conditions, while participating in the law suite to have Obamacare declared unconstitutional.

He is an odious, lying scumbag.