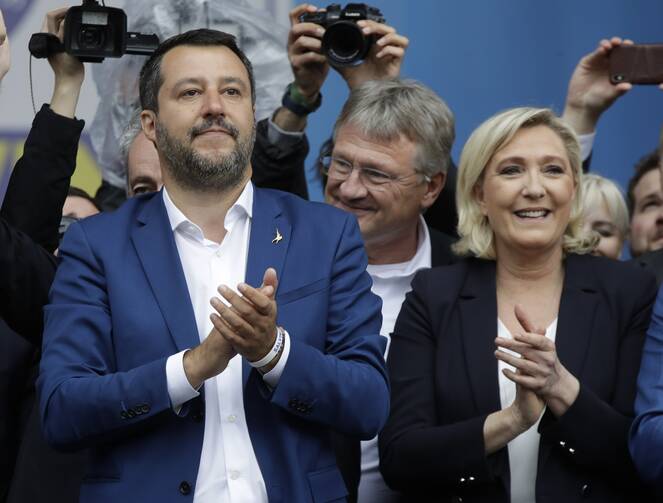 Matteo Salvini and Marine Le Pen, Leader of the French National Front, attend a rally organized by League leader Matteo Salvini, with leaders of other European nationalist parties, ahead of the May 23-26 European Parliamentary elections, in Milan, Italy, Saturday, May 18, 2019. (AP Photo/Luca Bruno)

ROME (AP) — Italian Interior Minister Matteo Salvini on Monday defended his invocation of God at a political rally, after Italy's Catholic establishment criticized it as a cynical exploitation of faith ahead of European Parliament elections this weekend.

Salvini brandished a rosary and entrusted Italy to the Virgin Mary at a rally on Saturday, which featured a host of far-right European leaders. He spoke glowingly of St. John Paul II and retired Pope Benedict XVI for having tried to remind Europe of its Christian roots.

Asked to comment, the Vatican's secretary of state, Cardinal Pietro Parolin, said God was for everyone and "invoking him for yourself is always very dangerous."

An Italian Jesuit close to Pope Francis, the Rev. Antonio Spadaro, denounced the use of the rosary and the invocation of God for political campaigning. Spadaro, who has criticized the influence of right-wing evangelicals in U.S. politics, tweeted a photo of a commemorative coin of U.S. President Donald Trump being promoted by U.S. evangelicals as a "point of contact" with God.

"There are those who in electoral campaigns use God and saints, and those who even sell coins to pray for the re-election of their candidate," he said.

"The exploitation of religion seems to know no decency."

Salvini has increasingly sought to portray his anti-migrant policies as driven by a desire to save lives, by discouraging migrant crossings from Libya — and entirely consistent with the Christian message. At least one Italian bishop has warned voters that anyone who votes for Salvini's League isn't Christian.

In a tweet Monday, Salvini refused to comment directly. "I'll continue to give witness to my Faith with my work for a more beautiful and secure Italy. Gossip I'll leave to others. Amen."

The Italian Catholic magazine Famiglia Cristiana said Salvini's performance "was the latest example of the exploitation of religion to justify the systematic violation of human rights in our country."