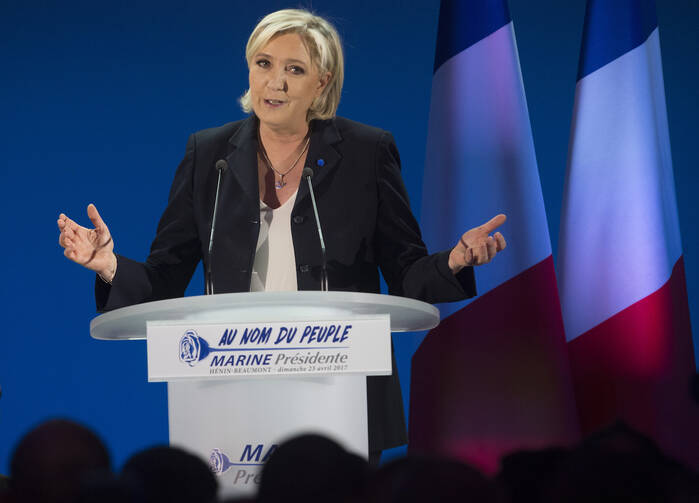 Marine Le Pen, leader of the far-right National Front, delivers a speech in Henin-Beaumont, France, April 23, after the first round of the French presidential elections. (CNS photo/Oliver Hoslet, EPA)

France's presidential runoff election seems almost designed to horrify any faithful Catholic. François Fillon, the conservative candidate who vaulted to an upset primary victory largely on the back of Catholic voters, was kept out of the runoff by a variety of scandals. The far-left Jean-Luc Mélenchon, despite a commitment to secularism bordering on the fanatical and his social liberalism, at least campaigned on social justice, welcoming migrants and a commitment to peace in foreign policy.

Meanwhile, there is no obvious Catholic choice between the remaining candidates. On the one hand, Emmanuel Macron, a centrist technocrat and one-time investment banker, promises to unleash the forces of the market and has an “anything goes” view of social issues. (Some Catholics might also blanch at the fact that his marriage started in adultery and that his current wife left behind a husband and three children.) And on the other hand, there is the notorious Marine Le Pen, who takes a hard line against immigration and in favor of secularism, and has even flip-flopped on her previous mild criticism of the country's reigning pro-abortion dogma.

There is considerable overlap between French conservatives and French Catholics.

That being said, Ms. Le Pen has a persistent appeal for many French Catholics, for a straightforward reason: There is considerable overlap between French conservatives and French Catholics. Few neutral observers will now deny that immigration from predominantly Muslim countries has put stress on the country and contributed to security issues or that the European Union and the euro face serious problems. Concerns like these are front and center for many conservatives who happen to be Catholic. They might find Ms. Le Pen distasteful, and she might not have been their first choice, but they might pick her over a man who seems to embody everything they see as having gone wrong with the country over the past 20 years.

Catholics are deeply split, in a fun-house mirror reflection of the broader split that the Macron-Le Pen runoff embodies: a country divided—by globalization, technology and social liberalism—into winners and losers who are increasingly at each other's throats. Sens Commun, the biggest “Catholic right” political organization, refused to endorse a candidate, unlike most elected officials in the French right. Following its usual practice, the French Conference of Catholic Bishops has refused to explicitly endorse a candidate, although it released a statement with “discernment points,” emphasizing issues like welcoming migrants, that are hard to read as anything but encouragement to vote Macron. Several bishops have explicitly said they would vote for Mr. Macron, as have the heads of a number of Catholic charities. La Croix, the biggest Catholic newspaper, which leans slightly to the left politically, is featuring "voices" of Catholics—bishops, nuns and intellectuals—explaining their vote, and so far it is 100 percent Macron. In other words, the Catholic “elite,” unanimous in its support for Macron, is growing disconnected from its much more ambivalent “base.”

The appeal of Marine Le Pen for some Catholics, however, runs deeper than opposition to Mr. Macron. Many see French national identity as threatened by the forces of militant Islam and progressivism, and traditional French national identity seems a much more hospitable milieu for Catholicism than either of the alternatives. Sometimes, it seems that Ms. Le Pen is the only candidate who will unapologetically stand up for defending that identity from external threats.

The danger, of course, is that the French Catholic revival that I have been chronicling becomes merely a tool for a populist politician to win elections and thereby defeats itself by becoming too associated with politics, in the way that American evangelicals have put a ceiling on their support because of their persistent association with hard-right politics. Marine Le Pen will probably not be president, at least this time around. But the tension between an otherworldly disengagement and a militant, perhaps quasi-reactionary, embrace of political populism will keep working itself out in the heart of resurgent French Catholicism.

Pascal-Emmanuel Gobry, who lives in Paris, is a contributing writer to America, a fellow at the Ethics and Public Policy Center in Washington, D.C., and a columnist at TheWeek.com.

It would be interesting to see how the author define "right" and "left." The term "left" has meaning but the term "right" no longer has any clear meaning especially in Western politics and certainly not in the United States.

The term "right" has just come to mean opposition to economic policies of left politicians and could be of many stripes. From what I understand Marie Le Pen is essentially a person of the left even though she is painted as a far right politician.

The Pew Research data conducted during the election--but before the runoff-- shows just a few percentage points more self-identified Catholics supporting LePen than the general population (but still in the 20%-something range).

It is a bit surprising that the far right nature of Ms. Le Pen's party, known for most of its history for its anti-semitism, is not even alluded to in this article. Ms. Le Pen is attempting to distance herself from her father, the founder of the Front National party, who was kicked out of the party in 2015, and is also attempting to claim that her party is no longer anti-Jewish nor that it still denies the reality of the Holocaust. Apparently Le Pen now thinks it's not OK to be anti-Jewish, but it is OK to be anti-Muslim (ALL French Muslims) and anti-immigrant in general. Yet, one of her staff was recently forced out for denying the Holocaust - but only after his belief was made public. A bit of corruption is at work with Le Pen also. She did concede that several of her staff were paid by the European Parliament for work they never did, and is now back-pedaling. Although on record, she is now trying to deny what she said. She has learned a lot from Trump - just keep lying, even when the lies are disproved and are on record.

Le Pen also attempts to downplay the role French nationals played in rounding up Jews for deportation to the Nazi death camps, by saying that the Vichy government was not really French, with only the exiles in London representing "real" French people.
Many Catholics (too many) voted for Trump, a man whose ideas, proposed policies, and personal morals contradict Catholic teaching. Sadly, it seems that many French Catholics today may also choose to ignore the extreme extreme positions of Le Pen's party, positions that directly contradict the gospels. It is a positive sign though, that most French bishops and other prominent Catholics are not supporting her. And since only about 5% of "Catholics" in France go to mass regularly, the term "Catholic vote" may have even less relevant there than it does here. The French are nominally Catholic, but most do not go to church or have much respect for clerics.

I personally like Marine Le Pen, but she is no Joan of Arc. Too bad. Still, France needs to liberate itself from the oligarch-controlled European Union. What does that burocratic monster do besides promote abortion, gender politics, and take control of weak countries (Greece, for example) in order to make them debt slaves and give artificial life to its big banks (Deutsche Bank, for example)?

I think Le Pen is right when she says that a woman will govern France as a result of Sunday's runoff: either it will be her or Angela Merkel. Ha! Macron, as Hollande today, would be content with the role of vice-chancellor of the European province of France (another Le Pen jab).

And then there is that shameless support of global media propping up little banker Macron. Reminds me of how the media, during 2016, threw itself to the feet of that political failure named Hillary Clinton.

So, despite her flaws, and despite me not being French of being able to vote this Sunday,

My apologies to all those insipid French bishops, nuns and Catholic intellectuals the article mentions.

A HEALTHY and POSITIVE POLICY CHANGE for MARIE LE PEN : 1. All Jewish People spread all over the World are our dear, elder Brothers and Sisters in THE REVEALED DIVINE FAITH. 2. NOT all Muslims are bad. GOOD Muslims are welcome in FRANCE and everywhere in the cultured World. 3. Time to give WOMEN an upper hand in the World and in France for they go MORE by heart than HEAD which is GOOD for mankind in general.