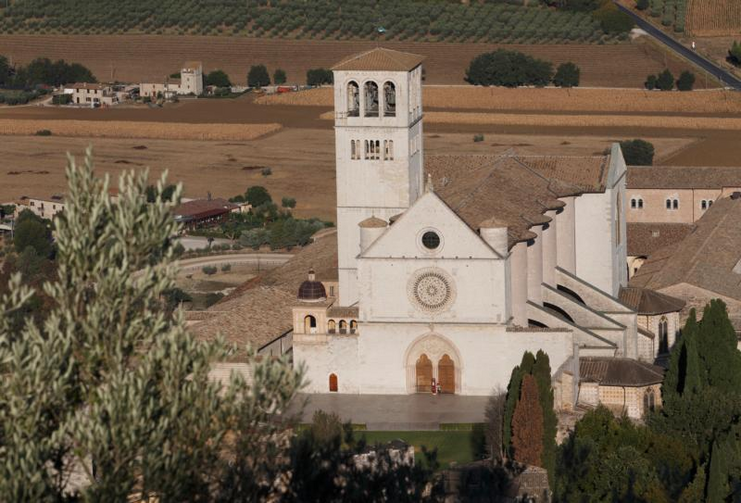 The Basilica of St. Francis is seen in Assisi, Italy, Sept. 6, 2011. Pope Francis has invited young economists and entrepreneurs to take part in an initiative to be launched in Assisi March 26-28, 2020. The initiative seeks to find new ways to do business, promote human dignity and protect the environment. (CNS photo/Paul Haring)

VATICAN CITY (CNS) -- Pope Francis has invited young economists and entrepreneurs around the world to help create a "new and courageous culture" that finds new ways to do business, promote human dignity and protect the environment.

"We need to correct models of growth incapable of guaranteeing respect for the environment, openness to life, concern for the family, social equality, the dignity of workers and the rights of future generations," the pope said in a letter inviting young people to take part in a new initiative.

The initiative, to be launched at an event in Assisi March 26-28, 2020, invites young men and women studying or working in the field of economics or business to join the pope and "enter into a 'covenant' to change today's economy and to give a soul to the economy of tomorrow."

The aim is to build and promote a different kind of economy: "one that brings life not death, one that is inclusive and not exclusive, humane and not dehumanizing, one that cares for the environment and does not despoil it," the pope said in the letter, released by the Vatican May 11.

The letter, addressed to "young economists and entrepreneurs," said that given "a need to 're-animate' the economy," there was no better place to launch the initiative than in Assisi, "which has for centuries eloquently symbolized a humanism of fraternity" and peace, and would be "a fitting place to inspire a new economy."

St. Francis of Assisi is the church's "outstanding example of care for the vulnerable and of an integral ecology," the pope said, which is why the event in Assisi is titled "The Economy of Francis."

The environment and all of creation need "a sound economy and a sustainable development that can heal its wounds and assure us of a worthy future," the pope wrote.

"Given this urgent need, each one of us is called to rethink his or her mental and moral priorities, to bring them into greater conformity with God's commandments and the demands of the common good."

"But I thought especially of inviting you, young people, because your desire for a better and happier future makes you even now a prophetic sign, pointing toward an economy attentive to the person and to the environment," he wrote.

The pope told young people that "if you listen to what your heart tells you, you will feel part of a new and courageous culture, you will not be afraid to face risks and work to build a new society."

"Your universities, your businesses and your organizations are workshops of hope for creating new ways of understanding the economy and progress, for combating the culture of waste, for giving voice to those who have none and for proposing new styles of life," he wrote.

"Only when our economic and social system no longer produces even a single victim, a single person cast aside, will we be able to celebrate the feast of universal fraternity," Pope Francis said.

I believe the Pope should stay out of economic policy.

J Cosgrove When I have a problem with what I just read in America I always hope that you have commented. Your insights are similar to my own, but I can use a lot of verbiage to say the same thing. Yes, the Pope doesn't understand world economy because of spending his life in Argentina. He should stick to Catholic dogma.

Pope Francis is following his predecessors in commenting on the economy . "The Catholic Church accepts the good that markets can bring in strict economic terms and in the specific sorts of freedom they can facilitate. But papal social teaching has consistently stressed that markets are limited and imperfect tools with potentially destructive aspects." From "What does Catholic Social Teaching say about the economy? It is more complicated than you think " by Vincent Miller in America.

When you or anyone can point to any good that Catholic Social Teaching has done, please do. Don't say Christian charity which is not Catholic Social Teaching. Catholic interference in social and economic policies have a track record of creating dysfunctional societies. Just look at Latin America. The modern economic world flowed from Protestant countries that promoted religious freedom. The Catholic Church fought it. The Church excels at individual morality not economic policy.

A new economy should benefit every citizen of our tiny Planet.