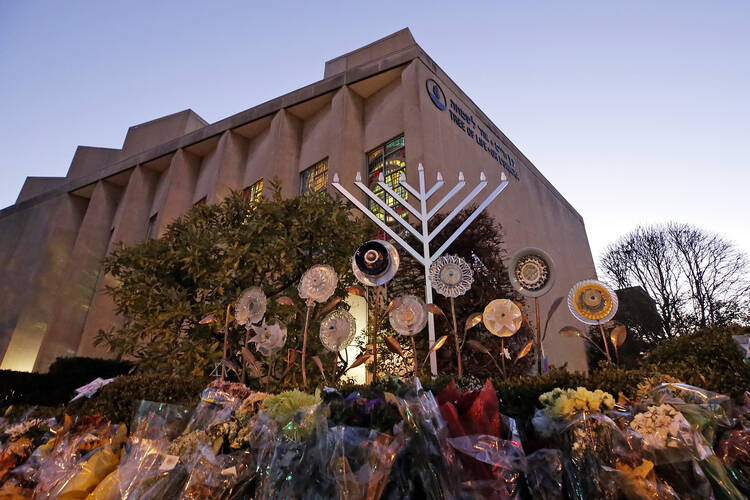 In this Sunday, Dec. 2, 2018 file photo, a menorah is installed outside the Tree of Life Synagogue in preparation for a celebration service at sundown on the first night of Hanukkah, in the Squirrel Hill neighborhood of Pittsburgh. A gunman shot and killed 11 people while they worshipped Saturday, Oct. 27, 2018 at the temple. Israeli researchers reported Wednesday that violent attacks against Jews spiked significantly last year, with the largest reported number of Jews killed in anti-Semitic acts in decades, leading to an "increasing sense of emergency" among Jewish communities worldwide.

Capped by the deadly shooting that killed 11 worshippers at Pittsburgh's Tree of Life synagogue on Oct. 27, assaults targeting Jews rose 13% in 2018, according to Tel Aviv University researchers. They recorded nearly 400 cases worldwide, with more than a quarter of the major violent cases taking place in the United States.

But the spike was most dramatic in western Europe, where Jews have faced even greater danger and threats. In Germany, for instance, there was a 70% increase in anti-Semitic violence.

"There is an increasing sense of emergency among Jews in many countries around the world," said Moshe Kantor, president of the European Jewish Congress, an umbrella group representing Jewish communities across the continent.

"It is now clear that anti-Semitism is no longer limited to the far-left, far-right and radical Islamist's triangle — it has become mainstream and often accepted by civil society," he said.

Tel Aviv University's Kantor Center for the Study of Contemporary European Jewry releases its report every year on the eve of Israel's Holocaust Remembrance Day, which begins Wednesday at sundown. This year, the report comes just days after another fatal shooting attack Saturday against a synagogue in southern California. The attack on the Chabad of Poway synagogue on the last day of Passover killed one woman and wounded three other people, including the rabbi.

In addition to the shooting attacks, assaults and vandalism, Kantor also noted the increased anti-Semitic vitriol online and in newspapers, including a recent anti-Semitic cartoon that appeared in The New York Times' international edition. It depicted Israeli Prime Minister Benjamin Netanyahu as a dog wearing a Star of David collar and leading a blind and skullcap-wearing President Donald Trump.

The Times has since apologized, calling the image "offensive," and vowing to refrain from publishing such bigoted cartoons again. Still, it sparked outrage among dozens of American Jewish groups that subsequently sent a letter calling on the newspaper to "become far more sensitive to anti-Semitism in the future."

"Anti-Semitism has entered gradually into the public discourse," he said. "Threats, harassments and insults have become more violent, inciting to even more physical violence against Jews. It feels like almost every taboo relating to Jews, Judaism and Jewish life has been broken."

The ascendancy of British Labour Party leader Jeremy Corbyn has also contributed to a growing sense of fear among Britain's Jewish community. Critics say Corbyn, a longtime critic of Israel, has long allowed anti-Jewish prejudice to go unchecked. Corbyn's supporters have been accused of sharing Holocaust denial and international Jewish banking conspiracies on social media. Several members of the party have quit it in protest.

Similarly, the inclusion of anti-Semitic activists in the Yellow Vests protests in France have raised greater concerns in a country in which anti-Semitic acts already account for half of all its documented hate crimes.

Kantor added that there has been an improvement in cooperation between Jewish communities and law enforcement agencies in Europe, and several European governments have taken strong steps as well, including fully adopting the working definition of anti-Semitism as outlined by the International Holocaust Remembrance Alliance.

The report says there has been a growing awareness of the threat among government agencies responsible for the well-being and security of their Jewish citizens.

Israel has also taken steps, hosting a global forum to combat anti-Semitism, and the Yad Vashem Holocaust memorial has reported wide participation in its online course on the origins of anti-Semitism. Netanyahu said following the attack in southern California he would be convening a special meeting over the rising anti-Semitic attacks worldwide.