Cardinal Muller warns against being silent about Catholic faith 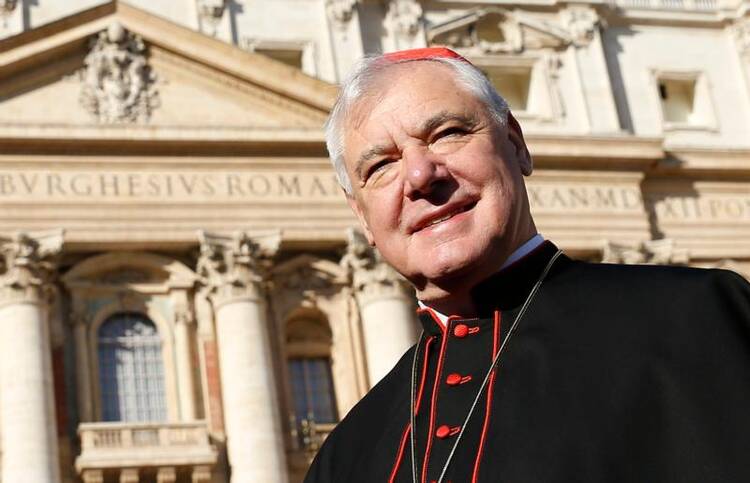 Cardinal Gerhard Muller, prefect of the Congregation for the Doctrine of the Faith, is pictured before Pope Francis' general audience in St. Peter's Square at the Vatican in this Nov. 19, 2014, file photo. Cardinal Muller released a "Manifesto of Faith" Feb. 8 in which he affirms basic teachings of the church "in the face of growing confusion about the doctrine of the faith." While the document has been viewed as a correction of Pope Francis' teachings, it does not specifically cite the pope. (CNS photo/Paul Haring)

VATICAN CITY (CNS) -- To keep silent about the truths of the Catholic faith or to teach the contrary is a form of religious deception that comes from the anti-Christ, said Cardinal Gerhard Muller.

The purpose of the church and its members, he said, is to lead people to Jesus, so all Catholics, but especially priests and bishops, "have a responsibility to recall these fundamental truths" and to strengthen the faith "by confessing the truth which is Jesus Christ himself."

The German theologian, who was head of the Congregation for the Doctrine of the Faith from 2012 to 2017, wrote what he called a "Manifesto of Faith." Subtitled with a verse from John 14:1, "Do not let your hearts be troubled," the five-page manifesto was released to several Catholic news sites Feb. 8.

"In the face of growing confusion about the doctrine of the faith, many bishops, priests, religious and laypeople of the Catholic Church have requested that I make a public testimony about the truth of revelation," he wrote.

While Cardinal Muller did not mention Pope Francis in his document, many people read it as a challenge to the pope; for example, LifesiteNews, one of the outlets that originally published the text, labeled it "a quasi correction of Pope Francis' pontificate."

Cardinal Müller on Viganò: No one has right to demand a pope’s resignation
Carol Glatz - Catholic News Service

St. John Paul II emphasized that "a sure norm for teaching the faith" is the Catechism of the Catholic Church, the cardinal said, but that teaching has been put to the test by what Pope Benedict XVI called the "dictatorship of relativism."

Quoting extensively from the catechism, Cardinal Muller summarized five keys tenants of Catholic doctrine: belief in the Trinity; the nature and authority of the church; Christ's presence in the sacraments; the "liberating truth" of moral law; and the reality of hell and promise of eternal life.

"Many wonder today what purpose the church still has in its existence, when even bishops prefer to be politicians rather than to proclaim the Gospel as teachers of the faith," he wrote.

"The role of the church must not be watered down by trivialities, but its proper place must be addressed," he wrote in his summary of the immortal nature of the soul and the judgment each person will face immediately after death.

"Either a purification" is still necessary or the person enters into the blessedness of heaven, he wrote. However, "there is also the dreadful possibility that a person will remain opposed to God to the very end, and by definitely refusing his love, condemns himself immediately and forever."

While Cardinal Muller did not mention Pope Francis in his document, many people read it as a challenge to the pope; for example, LifesiteNews, one of the outlets that originally published the text, labeled it a quasi correction of Pope Francis' pontificate.

"The eternity of the punishment of hell is a terrible reality," he wrote, and it is the place where the souls of those who die in a state of mortal sin descend.

Speaking about the sacraments of the church, the cardinal said the truth revealed in Jesus is the point of reference, not the opinion "of the majority or the spirit of the times."

"The task of the magisterium of the church is to 'preserve God's people from deviations and defections'" so that they may profess "the true faith without error," particularly concerning the church's seven sacraments, he said. "Anyone conscious of a grave sin must receive the sacrament of reconciliation before coming to Communion."

Cardinal Muller said that means that divorced and civilly remarried persons, whose sacramental marriage is considered valid before God, Christians who are not in full communion with the Catholic faith, and those who are not "properly disposed" must not receive Communion.

When it comes to priestly ordination, it is not possible to ordain women, he wrote. "To imply that this impossibility is somehow a form of discrimination against women shows only the lack of understanding for this sacrament, which is not about earthly power but the representation of Christ, the bridegroom of the church," he wrote.

"To keep silent about these and the other truths of the faith" and to teach people what is contrary to the faith "is the greatest deception against which the catechism vigorously warns," he wrote.

It leads people to "a religious delusion" and is "the fraud of anti-Christ," who seeks to deceive those who are lost and those who have not accepted the love of the truth by which they would be saved.

In a final appeal, the cardinal quotes St. Paul's Second Letter to Timothy (4:1-5): "Proclaim the word; be persistent whether it is convenient or inconvenient; convince, reprimand, encourage through all patience and teaching.

"For the time will come when people will not tolerate sound doctrine but, following their own desires and insatiable curiosity, will accumulate teachers and will stop listening to the truth and will be diverted to myths," the passage continued.

Faith needs to be proclaimed and purified from the roof-tops.

Of course the idiot Kasper has already pontificated a response. Not only is Cardinal Kasper a professional anti-Catholic bigot and racist, Kasper is the original process theologian who contended that God is imperfect and still in the process of learning how to be a good God and in need of smart theologians to teach Him about the human condition. Predictably, other sin-of-pride Catholics are willing to take what Kasper has to say seriously as an affront to the humility and spiritual sanity of Muller.

Lots of sine of pride from the left and right .

Lots of sine of pride from the left and right .

Editorial nitpick:
Tenants vs. Tenets. Both words, tenant and tenet, derive from the Latin verb tenere, “to hold,” but they are not interchangeable. A tenant is someone who rents or leases a house, apartment, etc. from a landlord. A tenet is a principle, dogma, belief, or doctrine generally held to be true.

Thank you. and Hallelujah!