Composting may offer the latest option in green burials 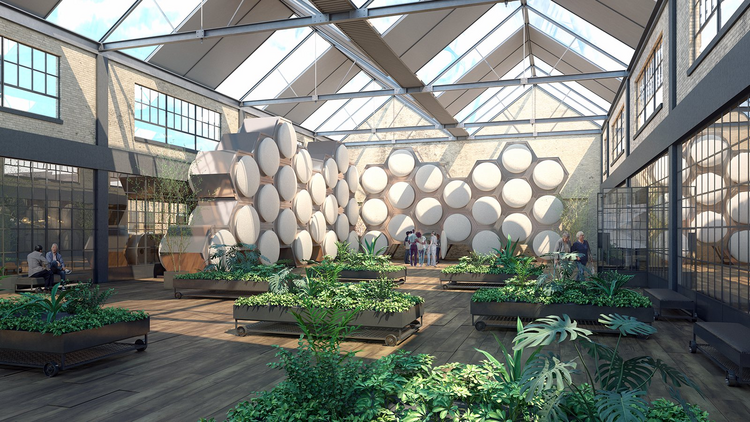 SPOKANE, WASH. (RNS) — Having one’s body composted after death and turned into about 1 cubic foot of soil could soon be an option for Washington state residents.

The approach, called recomposition, is currently being discussed by lawmakers and, if approved, could become a legal third option for after-death care by 2020.

“A lot of people might be reluctant to think or talk about death and might find the whole thing icky, but for the most part people are quite intrigued,” said Sen. Jamie Pedersen, a Democrat who is sponsoring the legislative bill.

Recomposition is a natural process that breaks down the body by placing it in a reusable vessel, covering it with wood chips and aerating it.

He said the world has been re-shaped by innovation, and funerals should be no different.

In Washington state, dead bodies can either be cremated or buried, but Pedersen said both are damaging to the environment and expensive.

“Cremation takes a gigantic amount of energy … and with traditional burial they typically embalm the bodies by draining blood and adding chemicals,” he said. “There are environmental issues with both methods.”

Recomposition is a natural process that breaks down the body by placing it in a reusable vessel, covering it with wood chips and aerating it, which creates an environment for microbes and necessary bacteria.

The process takes about 30 days, according to Recompose, the Seattle-based company behind the idea. The soil that is created from the body can either be given to the families or they can donate it to conservation land.

“Recomposition allows us to give back to the earth that supports us all our lives,” the company claims on its website.

Recompose plans to charge around $5,000 for its services.

The company recently co-sponsored a study, the Recomposition Science Project, at Washington State University and found that composting human bodies is environmentally sound. The study included examining and adapting techniques that have been developed for composting livestock.

“It is an understandable tendency to limit the amount of time we spend contemplating our after-death choices, but environmental realities are pressing us to develop alternatives to chemical embalming, carbon-generating cremation and the massive land use requirements of traditional cemeteries,” Recompose founder and CEO Katrina Spade said in a news release.

She added that, if every Washington state resident chose recomposition, it would save more than .5 million metric tons of CO2 within 10 years — enough to let 13 million seedlings grow into trees for 10 years.

According to the Center for Disease Control and Prevention, about 2.7 million people die annually in the U.S. More than half (53.5 percent) are cremated. The National Funeral Directors Association, though, reports that more people are showing an interest in green burials.

James Olson, a natural burial expert and owner of Olson Funeral Home and Cremation Service in Sheboygan, Wisconsin, said natural burials aren’t a new concept, though it may seem otherwise.

“Green burials have caught on, but it’s been going on all along; it just got a name now,” he said.

It wasn’t until the Civil War, when dead soldiers had to be transported back to their families, that embalming became commonplace in the U.S., said Olson.

The practice continued over the years as people became more transient and were no longer buried on the family homestead.

Pope Francis: No to euthanasia, but we should not obstinately resist death
Gerard O’Connell

Olson said the U.S. is one of the few countries that still embalms bodies and doesn’t re-use grave space.

“The U.S. likes concrete boxes; it’s what we got used to,” Olson said. He said that’s changing as more families are wanting a service that reflects their eco-friendly lifestyle.

Many families, he said, opt to have a body not embalmed, to have it embalmed with formaldehyde-free products and/or request biodegradable clothing, shrouds or a casket for burial.

A 2017 Pew Research Center report revealed that 74 percent of U.S. adults feel that “the country should do whatever it takes to protect the environment.”

Some religious traditions embrace a green burial approach. Jews are often buried, without embalming, in a wooden coffin held together with wooden dowels rather than nails. The idea is that the coffin and the body will both decompose and return to the earth.

Thomas Lynch, a funeral director and author of the forthcoming book “Whence and Whither: On Lives and Living,” a text about what comes after death, said he wasn’t surprised to learn about Washington state’s recomposition efforts.

“Everyone wants to be really useful in their demise....It has not so much to do with the method of disposition, but the participation in it.”

“Everyone wants to be really useful in their demise,” he said. “It has not so much to do with the method of disposition, but the participation in it.”

Seeing those wishes through can be healing for those left behind, he said.

“There’s this proper, useful energy created when the living are responsible to the dead for getting the dead to where they need to go,” said Lynch, who has been a funeral director in Michigan since the 1970s.

He said most people choose cremation in his state. Families are invited to see the process, but most decline. Out of sight, out of mind is how today’s culture deals with death, he explained.

He wants that to change.

“I think probably the culture is moving in the direction of paying to have it done rather than picking up their end of the shovel, or fire, or in this case a compost heap,” he said. “So I think this (recomposition) will be another sort of flash in the pan until people figure out a way to deal with their dead as a way of dealing with death.”

Lynch added that younger generations, who may grow their own food, for example, would likely be most interested in recomposition.

The Washington State Legislature is also looking to allow alkaline hydrolysis, which is a chemical process that dissolves the body using a liquid solution, leaving behind bones that can be ground into ash and using less energy than cremation. It’s currently legal in 16 states.

Pedersen noted that these changes wouldn’t eliminate the option for burial or cremation but would instead allow additional choices.

Having those choices is important, he said, since we all have to deal with what happens to our bodies in the end.

“Every one of us is going to have to face death eventually,” he said.

I find it a bit irresistible report this without a mention of the church’s teaching on treatment of the body after death. Of course the church loves the environment and on first read with no understanding of church teaching one would assume this to be a wonderful choice. But does it align with cannon 1176?

exactly below, lynn-
is this not a catholic journal?
what is your purpose?
this topic published in many papers
long ago, so why America, now?
without perspective u add nothing,
and waste my time
respectfully please get back to
insight thru jesuit thought

u will never b the nyt or evonomist