Pope Francis: No to euthanasia, but we should not obstinately resist death 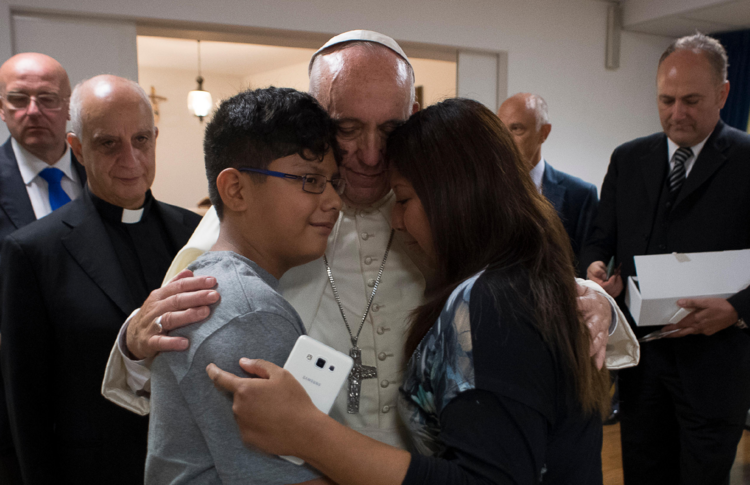 Pope Francis visits patients at the Villa Speranza hospice, which is connected to Gemelli Hospital, in Rome Sept. 16. The visit was part of the pope's series of Friday works of mercy during the Holy Year. (CNS photo/L'Osservatore Romano, handout)

Pope Francis has reaffirmed the Catholic teaching that euthanasia “is always wrong, in that the intent of euthanasia is to end life and cause death,” but, as Pius XII taught 60 years ago, “there is no obligation to have recourse in all circumstances to every possible remedy” to keep a person alive. “In some specific cases,” the pope said, “it is permissible to refrain from their use.”

He addressed this delicate question in a message to the president of the Pontifical Academy of Life, Archbishop Vincenzo Paglia, on the occasion of the European Region Meeting of the World Medical Association on end-of-life issues, which is being held in the Vatican, Nov. 16 to 17.

Pope Francis has reaffirmed the Catholic teaching that euthanasia “is always wrong.”

The message, released today by the Vatican, comes at a time when the question of euthanasia is being discussed in many countries. In it, the pope reaffirmed the church’s teaching that “it is morally licit to decide not to adopt therapeutic measures, or to discontinue them, when their use does not meet that ethical and humanistic standard that would later be called ‘due proportion in the use of remedies.’”

He pointed out, however, that “careful discernment” is required before one decides to discontinue treatment. He explained that such discernment must consider “the moral object, the attending circumstances, and the intentions of those involved.” Moreover, quoting the Catechism of the Catholic Church, he said, “The decision should be made by the patient if he is competent and able.” He emphasized the need for what he called “responsible closeness” on the part of the medical staff and all others who are in one way or another related to the patient.

“There is no obligation to have recourse in all circumstances to every possible remedy” to keep a person alive.

He explained that an essential element of this decision “is that it considers the result that can be expected, taking into account the state of the sick person and his or her physical and moral resources.” In doing so, it makes possible a decision to withdraw “overzealous treatment” that is morally permissible.

He affirmed that “such a decision responsibly acknowledges the limitations of our mortality, once it becomes clear that opposition to it is futile.” He recalled that the catechism states clearly that “here one does not will to cause death; one’s inability to impede it is merely accepted” (No. 2278).

In the letter, which addresses the complexities of medical care and the decisions involving medical staff today, Pope Francis explained:

This difference of perspective restores humanity to the accompaniment of the dying, while not attempting to justify the suppression of the living. It is clear that not adopting, or else suspending, disproportionate measures, means avoiding overzealous treatment; from an ethical standpoint, it is completely different from euthanasia, which is always wrong, in that the intent of euthanasia is to end life and cause death.

The full text of the letter is available here.