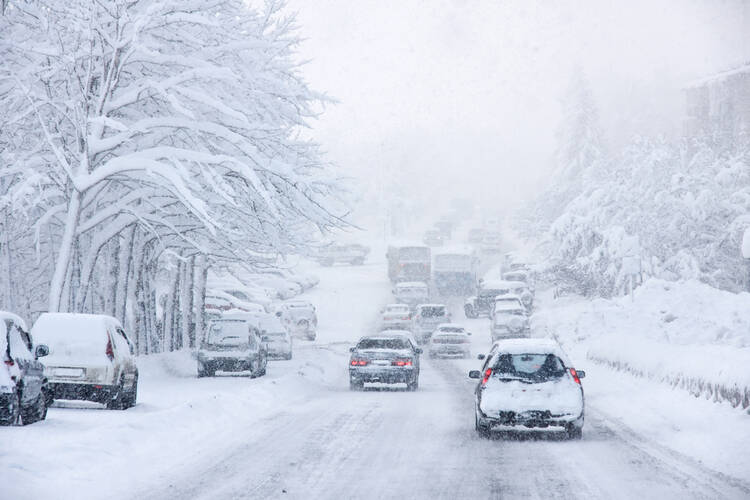 This Washington winter has not brought us much snow. There have been repeated waves of Arctic cold for several days at a time, punctuated by some strikingly mild days. In one break 10 days ago the mercury climbed to 67 degrees and then plummeted again into the teens and 20s. Most of our precipitation has come in those brief mild breaks.

For the third time this winter, the Potomac is frozen over. I have often seen the river freeze over in late December and January, but never in late February. From my perch in the Jesuit residence, the river is white from upstream, under Key Bridge and on to the edge of our view at the Kennedy Center. Most years by mid-February the winter is losing its grip. If snow fell, we didn’t need to worry about it, because the sun was high enough to accelerate clearing roads and sidewalks. Not this year.

Tuesday the first significant snow of the year fell. In Georgetown we had only 4 or 5 inches. But like the federal government, the university was closed. There was a “Snow Day with Instructional Continuity.” That means, neither faculty nor students had to appear on campus, but, with the aid of technology, instructors were expected to make something approximating class available for students.

I was prepared with Collaborate, a video/audio program for interaction with students, a blessing for me, because I practice Socratic Method. But Tuesday was not a class day for me, so I didn’t get a chance to try it out. ‘Instructional continuity’ is a boon for all. Administrators feel they have accountability, but faculty and students have flexibility that can savor at least some of the break in routine that comes with a snow day.

But for Washington as a whole, technology allows federal government offices to close, and the city to avoid the chaos that used to come with snow. Outside the Beltway, especially in northern climes, Americans may scoff at wimpy Washingtonians shutting down for a little snow. But the city is a bowl, and traffic becomes gridlocked as buses and light cars stop at intersections and try to climb uphill. This past Tuesday there was no gridlock, no chaos, no craziness. The government, the city and the university carried on—in cyberspace.

Even though we don’t enjoy the full break that snow days gave in my New York boyhood, with neighbors bonding as they shoveled their walks and driveways and kids slid down the hill on their Flexible Flyers, the technological alternatives take the edge off the anxiety in this commuter city, and the added time and quiet allow us just a little space in which to enjoy the placid pleasures of the world of fresh fallen snow.