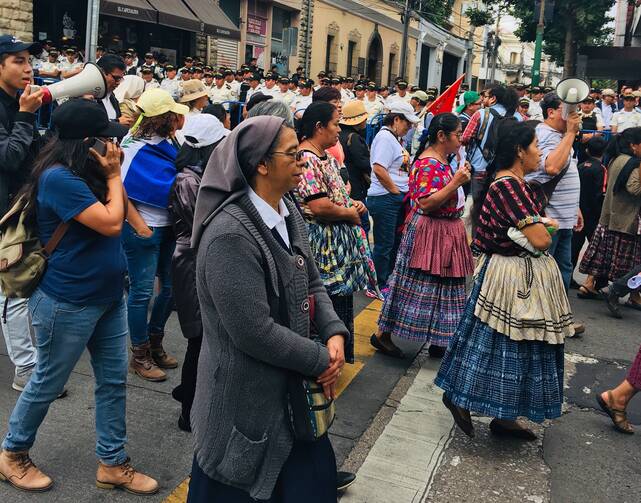 The Guatemalan Congress voted on Jan. 17 to move forward with changes to the National Reconciliation Law. The proposed legislation would establish new restrictions on prosecuting war crimes, extending amnesties for many offenses committed during Guatemala’s brutal civil war. It could mean convicted war criminals will walk free.

The decision was met with cheers from the families of high-ranking military officials convicted of crimes against humanity, but on Twitter, genocide survivors denounced the limitations on war-crime prosecutions. A U.N. group of human rights investigators reminded Congress of Guatemala’s obligation under international law to investigate, prosecute and sanction those responsible for serious human rights violations.

The amendments to the law come just days after President Jimmy Morales presented his annual national progress report on Jan. 14 to a nearly empty Congress. Representatives from other political parties, the U.S. embassy, the attorney general’s office, Constitutional Court Magistrates and the human rights ombudsman’s office were notably absent.

Many of the empty seats reflected an open protest against the president as Mr. Morales came to Congress to report on the country’s advances in health, education and infrastructure before launching into the political rhetoric he now regularly deploys to justify questionable decisions—as a defense of Guatemalan sovereignty against international intrusions.

“What they are doing not only puts Guatemala at risk but the entire region. Bit by bit, for more than a year, they have been trying to divide us. The elections are at risk. We are six months away.”

Mr. Morales and the president of the Guatemalan Congress, Alvaro Arzu Escobar, argue that Guatemalan democracy is threatened by a “new colonialism,” deriding the International Commission Against Impunity in Guatemala. That U.N.-backed mission, known by its Spanish acronym, Cicig, has prosecuted dozens of high-profile corruption cases in Guatemala since its mandate was approved by the Guatemalan Congress in August 2007.

“We don’t break the law,” said Mr. Morales, a former television comedian and political outsider elected by a landslide in 2015, said. “If you break the law, you will have to face justice,” he adds, disdaining an international commission that is trying to ascertain just what laws he may have broken when he ran for president.

For close to a year and a half, Mr. Morales and his supporters, many tied to Guatemala’s military and economic elite, have been in open conflict with Cicig and its chief Ivan Velasquez, a Colombian jurist and diplomat. In August 2017 the commission accused the president’s party of illegal campaign financing.

The president denies wrongdoing and remains immune from prosecution as long as he holds office. On three occasions, Mr. Velásquez has sought to lift that immunity. Through a Cicig investigation, Mr. Morales’ son and brother were charged with fraud, but the case suffered a setback on Jan. 17 when the Guatemalan tribunal hearing it threw out Cicig prosecutors.

In response, Mr. Morales has unsuccessfully attempted to expel Mr. Velasquez from the country. Last August, surrounded by military generals and his cabinet, Mr. Morales announced that Guatemala would not extend the anti-impunity commission’s mandate beyond September 2019. On Jan. 7, Mr. Morales sought to unilaterally cancel the commission after trying to prevent the U.N. investigators and prosecutors from entering the country. Both decisions were quashed by the Constitutional Court. Officials of Mr. Morales’ government confirmed on Jan. 16 that it would not obey the court ruling.

“You don’t discuss the Court’s orders, you obey them,” said Helen Mack Chang, an outspoken defender of human rights in Guatemala since the murder of her sister, Guatemalan anthropologist Myrna Mack Chang. Myrna had criticized the government over its treatment of indigenous Mayan people and was killed by a military death squad in 1990. Helen Mack spoke out against the Morales administration during a press conference on Jan. 6 in Guatemala City. She said that shutting down the Cicig “has only been an excuse...the first step towards [the impunity] they want. We shouldn’t lose sight of that. That’s the final objective.”

The president denies wrongdoing and remains immune from prosecution as long as he holds office. On three occasions, the corruption commission has sought to lift that immunity.

Though the focus has been on the Cicig, what will happen to the Constitutional Court magistrates has become a crucial concern. The justices have been consistently defending constitutional order throughout the Morales Administration, but last week, the Supreme Court voted in favor of an effort to impeach three of the judges.

“What they are doing not only puts Guatemala at risk but the entire region. Bit by bit, for more than a year, they have been trying to divide us. The elections are at risk. We are six months away,” said Ms. Mack.

The dates of the 2019 general elections will officially be announced on Jan. 18. Mr. Morales has warned that the elections should be free of foreign intervention. With the Constitutional Court potentially neutered, critics and human rights organizations are fearful of possible electoral fraud. “What they want to do is perpetuate this regime of corruption and impunity,” said Ms. Mack.

Leonel Castro, an indigenous Maya Kaqchikel member of the “People’s Batucada” told America, “What’s happening in Guatemala is very serious. We believe there’s already been a coup d’état because the executive branch is not obeying the order of the Constitution.” That civil society opposition group came together in 2015 after the administration of retired general Otto Perez Molina first toyed with the idea of ending the Cicig mandate.

Tens of thousands of people took to the streets in support of its work then, and, with significant pressure from Washington, Mr. Perez Molina was forced to renew the mandate until 2019. Months later, he was forced to step down just before the general elections and was charged with overseeing a multi-million dollar customs fraud ring and other corruption charges.

During his successful presidential bid, Mr. Morales ran on the campaign slogan: “Neither Corrupt, Nor a Thief.” Though there was a call to put elections on hold, given the political turmoil at the time, he won in the first round of elections just days after Mr. Molina was arrested.

Thousand of Guatemalans took to the streets to denounce Mr. Morales’ latest attempt to shut down the corruption commission.

Now outside of Congress on Jan 14, thousand of Guatemalans took to the streets to denounce Mr. Morales’ latest attempt to shut down the Cicig. “We have to raise our voices. It’s is more important now than ever,” said Andres Montano, director of Tibet House Guatemala and spokesperson for the Sentinels Religious Sector, an interfaith group that marched alongside the indigenous leaders who convened the march and representatives of civil society and grassroots organizations that joined them.

“We are Buddhists, Catholics, Protestants together fighting for a common purpose in a non-violent way and trying to give hope back to the people,” he told America. He said that the Morales’ government has robbed “the people of hope” through efforts to protect institutional corruption.

Lenina Garcia, president of the University Student’s Association, has been leading the student opposition to the Morales administration. “The little hope we have left for there to be justice is with [the magistrates of the Constitutional Court],” Ms. Garcia said at a press conference on Jan. 6. “For there to be an advance in this fight against impunity and corruption.”

The Conference of Religious of Guatemala (CONFREGUA), a member group of the Sentinels, released a statement regarding the nation’s political crisis on Jan. 10. They thanked organizations that have united to defend the Constitution by “denouncing and manifesting their outrage at the dictatorship of the government and its henchmen.” The conference called for “more bishops on the side of the poor” and expressed its admiration for university students who have taken to the streets to protest the Morales government.

The same day, the Guatemalan Conference of Bishops issued a statement expressing its “huge concern and great indignation” for the actions of Mr. Morales and his rejection of the Constitutional Court decisions, moves which the conference said were in clear violation of the 1996 Peace Accords that had ended Guatemala’s 36-year genocidal conflict.

"We deeply regret the open confrontation,” the bishops wrote. "We express our rejection of the polarization that, taken to its extreme, leads to violence with serious consequences for social peace. They wear out energies that should be directed towards solutions. We see with satisfaction and relief the coherent legal actions carried out by the Constitutional Court, an instance constituted to determine the correct interpretation of the Constitution of the Republic."

In Honduras, Berta Cáceres’s killers have been convicted
Jackie McVicar

The Trump administration has been keeping silent on the recent attacks against the Cicig and the connections between impunity, corruption and migration in Guatemala. But on Jan. 17, Guatemalan-born representative Norma Torres, a Democrat from California, and Jim McGovern, a Democrat from Massachusetts, were joined by 45 U.S. lawmakers in a letter to Mr. Trump, urging him to take strong action against the Morales government. The letter noted the Guatemalan government’s “anti-democratic behavior” and argued it had “undermined the rule of law,” creating further destabilization in this already troubled Central American region.

U.N. Secretary-General António Guterres has vowed to continue the Cicig mandate until it is scheduled to conclude in September, though because of security concerns, members of the commission’s staff who are not Guatemalan citizens left the country in January. On Jan. 15, Mr. Velasquez said he would consider resigning from the Cicig if that would placate Mr. Morales and allow the commission to continue its work.

Civil society response, from marches to legal actions, will continue. The political and institutional crisis in Guatemala will only ramp up in the next six months as the nation prepares for general elections.

Guatemalans are attempting to secure justice against those who perpetrated horrendous atrocities in a brutal civil war. The lack of a forceful response to this deteriorating situation reflects both the Trump administration's contempt for the human rights of Latin Americans and the self-inflicted chaos within our own government. It is also a consequence of Trump's short-sighted "America First" agenda that ignores the extent to which the US can lead by example. It is yet another example of how Trump's moral bankruptcy is eroding the plight of people not just in the US but around the world.