In Honduras, Berta Cáceres’s killers have been convicted 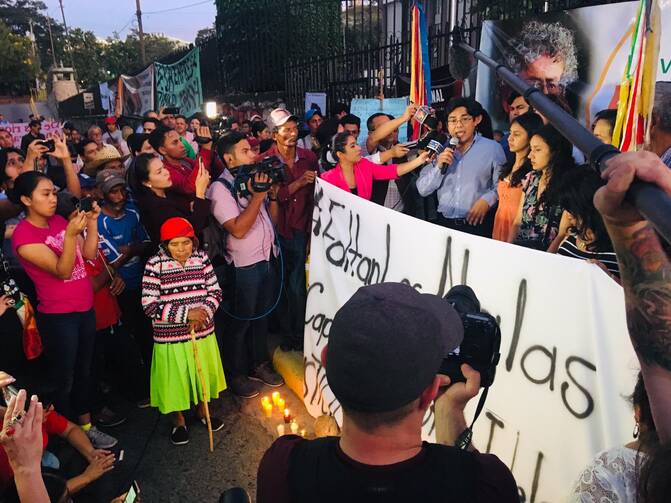 Family members and indigenous activists protest outside the courtroom as the killers of Berta Cáceres were convicted. But did the investigation go far enough. Photo by Jackie McVicar

In a packed and tense courtroom in Tegucigalpa, Honduras, filled with diplomats, international observers and the press, seven men were convicted on Nov. 29 of the murder of the indigenous rights leader Berta Cáceres. Four of the young men, paid killers who murdered Ms. Cáceres in her home on March 2, 2016, were also convicted of the attempted murder of environmental activist Gustavo Castro. He was a friend of Ms. Cáceres who had been staying at her house on the night of the attack.

One man, the twin brother of one of the convicted assassins, was absolved of the crimes. Sentencing will take place on Jan. 10. The men face 30 years to life in prison plus additional time for the attempted murder.

The court ruled that the murder was premeditated with the “consent of Desa executives.” Desa is the Honduran company holding the concession for a hydroelectric dam project on the Gualcarque River on disputed land traditionally held by an indigenous community.

David Castillo, president of Desa (Desarollos Energeticos Sociedad Anonima), has also been charged with Ms. Cáceres’s murder and is expected to face trial in 2019. Daniel Atala Zablah, DESA’s chief financial officer, along with other members of the powerful Atala Zablah family who are members of its board of directors, participated in phone conversations that were introduced as evidence in the trial but have not been charged as co-conspirators in the assassination.

“We aren’t afraid. Because when they kill your mom, you lose all fear. We are ready to do what it takes to have justice for her.”

Ms. Cáceres had spoken out against the construction of the Agua Zarca dam project in indigenous Lenca territory; she had filed 33 complaints about threats she received in relation to the project with Honduran authorities before her murder. None were investigated.

Indigenous members of the Consejo Cívico de Organizaciones Populares e Indígenas de Honduras (COPINH), the ecological and indigenous rights advocacy group founded by Ms. Cáceres, gathered outside the court to support her two youngest daughters, on hand to witness the verdict. One daughter, Bertha Zúniga Cáceres, is now the national coordinator of the organization.

Ms. Cáceres’s family is pushing for the internationally financed Agua Zarca dam project to be canceled and for more arrests among corporate superiors at Desa who may have been involved in Berta Cáceres’s murder. The family members are keenly aware that they need to be careful in a country that has experienced the highest number of murders of environmental activists in the world.

Olivia Zuniga, Ms. Cáceres’ eldest daughter and a member of the Honduran Congress, spoke to America outside the courthouse: “We aren’t afraid. Because when they kill your mom, you lose all fear. We are ready to do what it takes to have justice for her.”

The family of Ms. Cáceres and their private attorneys had not attended the trial to express their objections to the way family members had been treated during proceedings but joined the court for the closing statements when Laura Zuniga stood with her sister Olivia to offer the family’s victim impact statement.

“We are not passive victims,” she said. “We will act because Berta Cáceres deserves it, because the Lenca people deserve it, because they keep persecuting us even now, because this criminal structure that killed Berta Cáceres is still active and we will also denounce that.” COPINH activists have repeatedly denounced Desa as a criminal enterprise. In a statement, Desa lawyers described the Desa employees pursued by investigators of Ms. Cáceres’s murder as political prisoners.

Inside, Olivia Zuniga, sat beside her grandmother and aunts and uncles in the back row of the courtroom. Nearby sat the wife of Major Mariano Diaz, a senior military intelligence officer who the court said had been an “essential collaborator” in the murder.

The daughter and mother of the Desa environmental and social manager Sergio Rodriguez, who the court said provided the essential information used to track Ms. Cáceres and give the necessary information to her assassins, sat in the front row, the same spot they have used for the duration of the trial. His daughter wept as she heard her father convicted of the murder.

Douglas Bustillo, former head of Desa security and a former Honduran military officer, was found also guilty for his role in planning the murder, together with another former military officer Henry Hernandez who was present at the time of the murder. No family of the convicted hitmen appeared to be present.

The trial lasted five weeks after a series of irregularities in the legal proceedings. The convictions will be appealed but not before a written sentence is delivered sometime in 2019.