Who will give Asia Bibi asylum? A blasphemy case in Pakistan puts Britain in a difficult spot 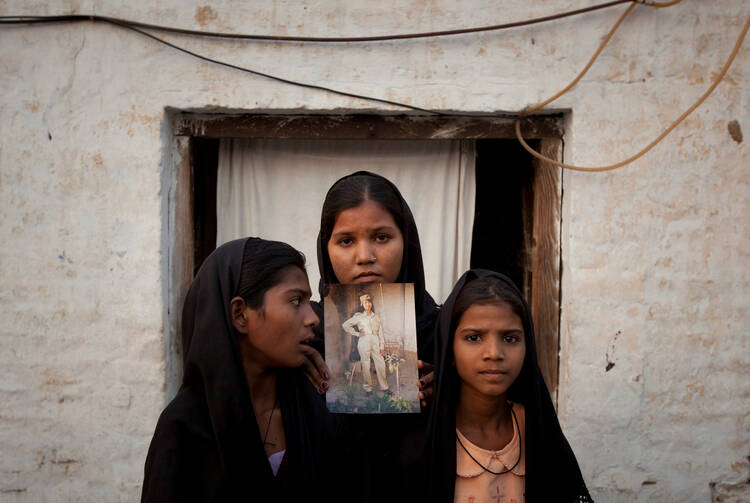 A disturbing case in Pakistan, a long way from us here in London, raises thought-provoking questions for all of us, no matter where we are. Asia Bibi is a Catholic woman, a farmworker and mother of five from the Punjab Province of Pakistan.

In 2010 she was convicted of blasphemy against Islam and sentenced to death. But in a landmark decision at the end of October, she was, to the surprise of some and fury of others, acquitted by a three-member bench of Pakistan’s Supreme Court after eight years in prison. Within hours, riots broke out across the country. Although Ms. Bibi was moved to a safe place by order of the court, she and her family may be in more grave danger than ever. Prime Minister Imran Khan has, for now, prohibited Ms. Bibi from leaving Pakistan. Australian, Canadian and Dutch diplomats are reportedly negotiating with the Pakistani government for her release so she might travel to one of those countries for asylum.

“We are constantly receiving threats, and on more than one occasion we have been followed.”

Among the most recent news, reported by the Catholic organization Aid to the Church in Need (A.C.N.) and the Fides news agency, are concerns for the family of Joseph Nadeem, who have taken care of Ms. Bibi’s family since she was sent to death row. Since her release, they have sheltered her children, whom she has not yet been able to see.

Mr. Nadeem now fears for his own children, telling A.C.N., “In recent days, the Islamists have fired at the gate of our home. We are constantly receiving threats, and on more than one occasion we have been followed.”

Mr. Nadeem has been assisting Ms. Bibi and her husband, both virtually illiterate, for some years. He has expressed his hope that both families could find refuge in Rome before Christmas with the help of A.C.N. In the United States, evangelical groups have urged Secretary of State Mike Pompeo to offer asylum to her and her family, so far to no avail.

Evangelical groups have urged Secretary of State Mike Pompeo to offer asylum to her and her family, so far to no avail.

According to local media, Pakistani police have cracked down on the Islamic radical party Tehreek-e-Labbaik Pakistan (T.L.P.) and arrested its leader, the hard-line cleric Khadim Hussain Rizvi, on Nov. 23. This is the group that organized violent protests after Ms. Bibi’s acquittal and release. Mr. Rizvi’s party paralyzed the capital city of Islamabad for weeks, cresting in a wave of protests on Nov. 25 that Mr. Rizvi called for as a way to “pay tribute to the martyrs of his party.” Mr. Rizvi has also publicly threatened a fatwa against the magistrates who acquitted Ms. Bibi.

Ms. Bibi and her family are believed to have asked several countries for safe transit and sanctuary, including Britain. But the Home Office concluded that Britain would not grant asylum to Ms. Bibi after the Foreign Office expressed fears of retaliation against its embassies and civilians in other nations.

This has led to accusations that Britain’s asylum policy is effectively being directed by mobs in Pakistan, a charge that the government unconvincingly tried to refute. Some have murmured that fear of similar opposition from Muslim groups in English cities could have influenced the government’s decision.

Deep unease continues here after the government’s tepid response to Ms. Bibi’s pleas. Is the decision to refuse asylum mainly predicated on fear of retaliation? If so, the state’s moral principles have surely been watered down, if not abandoned.

The sad episode touches on the issues of religious freedom and tolerance, but further considerations in Britain include the extent of its humanitarian obligation to respond to injustices and human rights violations in nations that it once ruled. Britain drew the boundaries, often arbitrarily, in numerous part of the world during imperial and post-imperial times. Frequently, these partitions have soon been followed by conflict and persecution; should the current government accept responsibility for ensuring freedom from bigotry and violence in the countries that Britain divided, then left to get on with it?

A number of prominent British imams have opposed extremism by joining calls for asylum for Ms. Bibi and her family. And, as the Irish people recently taught Britons, it could well be time to talk about and, if necessary, challenge all blasphemy laws, which may no longer be appropriate if indeed they ever were. Human compassion, humanitarian principles and the right to freedom of religious belief and expression, so often cited by governments but not always delivered, must surely be prominent in the responses we in the West make to situations like Asia Bibi’s.

Decent Americans, not most republicans but some, of course would offer her & her family asylum. What we are dealing with now, it won't happen. Know why? She's brown. Yup, christian, but still brown & y'all know how 45 feels about "those" people. SAD!

I suggest she come to Australia and, failing that go to the UK but not live anywhere in London.

I wish our Pope would stop all the parochial nonsense he seems taken up with and call a universal Crusade - world-wide boycott, disinvestment and sanctions against all nations and states where the official religion is Islam, any sort of Islam, and bans all other states from allowing migration or visiting elsewhere by their citizens and withdraws all diplomatic relations.

The (T.L.P.) is just another radical group using Religion to seek Power and Recognition in their country. They are no different then White Nationalists scapegoating Jews and Minorities for their own personal problems.

STM it puts quite a few Western countries “in a difficult spot”. There is no outstanding reason why she should come to Britain in particular: this country is not Catholic, barely even Christian. It has no greater moral obligations to Pakistani Christians than to other (say) the Gurkhas or to other foreigners.

Britain has not acted particularly well in this case - but neither has it behaved with exceptional inhumanity or unfairness. When all is said & done, she is just another person in need who might be better provided for in a different country. Britain has no obligation to take her in that makes Britain’s refusal to do so in any way exceptional.

As for compassion, politics needs to be realistic for countries to survive and prosper in a world that is not guided by compassion or virtue, but by what people will put up with, or can get away with. Compassion is a very bad basis for government policy - or for running a Church. Amorality works, and what works, not what is supposedly good, is what guides governments. And sometimes, amorality cannot afford to be compassionate. Christian morality is fine for those who claim to believe in it, but a multicultural state has no right to give exceptional status to what Christians think, because the state has no means of judging that Christian ethics are in any way preferable to any other. Britain is a secular, multicultural state, so it cannot give Christians exceptional treatment.