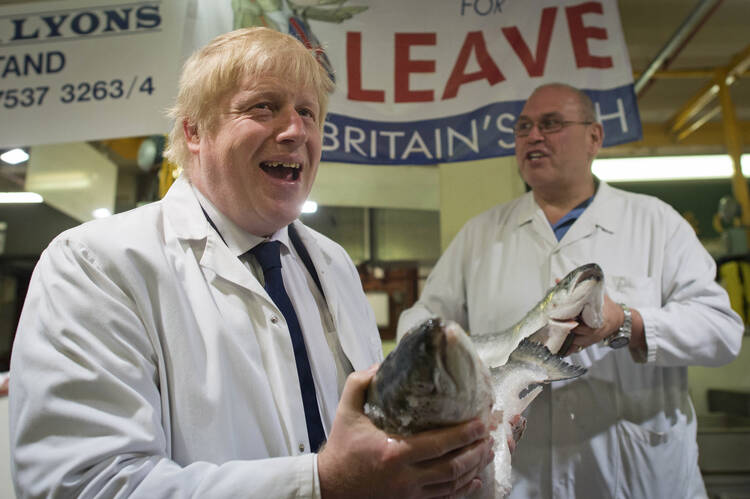 Hate and ugliness have, most sadly, come to define these final few days of what passes for political campaigning in this shockingly depressing “Brexit/Bremain” referendum.

Fear and falsehood have predominated the national “debate” so far and since these and many more negativities have been foregrounded and insufficiently challenged, there has grown up an assumption of permission to engage in perhaps the basest stridency ever seen in a U.K. political vote. It’s now OK to peddle lies and outright racism, then point the finger at someone else. Many a primary-school playground bears witness to a much higher standard of discussion than this. We can’t even describe this as dialogue because that connotes at least some listening to the other, and none of that is happening.

It’s become a rhetorical race-to-the-bottom during which narrow self-interest, petty nationalisms and fears about immigration have completely elbowed out any discussion of the philosophy or any higher ideals of the E.U. There has been no discourse about shared interest, nothing on how the peace has been kept in this continent for decades, not a word about how social policy and workers’ rights have been guaranteed and the lives of many improved. Instead, there has been a near-constant repetition of the tropes of fear; “ruled by an unelected European Superstate” is one, ignoring the demonstrable fact that unelected bureaucrats can do nothing without the agreement of the 751 elected MEPs and of member states’ national governments. Nor is the European Union any kind of state. It has become a flawed and bloated bureaucracy, but you can’t reform that by walking away from it.

Another popular slogan of the Brexit crowd is “Take back control” or its variant “We want our country back,” feeding on an ill-informed sense that sovereignty has been stolen, not pooled, and perpetuating an ugly anti-immigration polemic that has been virtually indistinguishable from bigotry. Immigrants, it has been strongly hinted, will take away from the United Kingdom what is left of the prosperity that Brussels has not already purloined.

Just about the worst example of this ugliness is the poster dreamt up by the United Kingdom Independence Party (U.K.I.P.) and unveiled a few days ago. Taking a picture of a long queue of refugees approaching a border in Eastern Europe, it pandered to the anti-immigration rhetoric that has become such an unedifying feature of this campaign.

This is the party that threatened the Tories so much that they brought about this whole referendum business, along with its potential for wrecking the country, destroying what social cohesion we have (and there is much more of that than their nasty campaigning, and that of the Tory Right, insinuates), fear and scapegoating of all immigrants, including refugees, and encouraging through legitimization the hateful undercurrents of petty nationalism that rumble here and across Europe. The poster, several square metres and mounted on the side of a large van, was captioned “Breaking-point”; the only white face in the picture had been obscured by some text.

That it is a press photo of an event at least 1,000 miles away from British shores (the only land-border we have is with the Irish Republic!) was neither here nor there. A fact conveniently ignored is that whether or not we accept refugees is a matter of national, not E.U. policy anyway. Then breathtakingly, the leader of U.K.I.P had the gall to claim that the furor over the poster came about only because of last week’s murder of Labour Party Member of Parliament, Jo Cox.

It is far simpler to peddle fear than hope. All that simplistic sloganizing has tended to obscure the very real and informed concerns voiced in these final days, ranging from an array of economists and international leaders, who predicted dire consequences should the vote be to leave the European Union, to the Irish Taoiseach (Premier) correctly pointing out the damage that could be done to the Northern Irish Peace process. He reminded U.K. voters that, among other concerns, a Brexit would probably lead to the restoration of policed borders between north and south in Ireland.

On the day before polling, the Secretary-General of NATO declared that the struggle against terrorism would be vitiated were Britain not at the heart of Europe. Legitimate economic and security questions have got lost in a welter of fear-driven assertions. Each side has taken to accusing the other of adopting Project Fear strategies almost in the same breath as they do it themselves. We can no longer tell the difference. Just hours before the polls finally open, there is a fervent prayer in at least some hearts that hope might yet triumph over fear.