More than 40 killed in church attack in Central African Republic 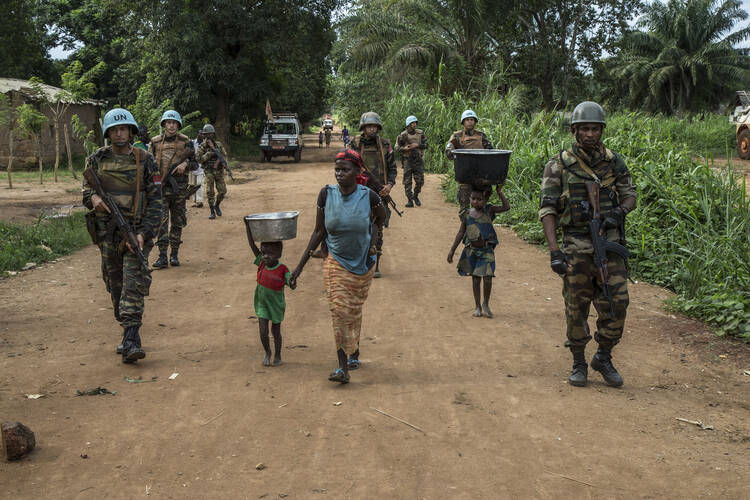 Vatican news services are reporting a fresh outbreak of inter-religious violence in the Central African Republic. More than 40 people were massacred on Nov. 15 during a guerrilla attack on the Cathedral of Alindao and an adjoining compound where a camp for people displaced by previous violence had been established. The death toll is expected to rise as U.N. forces sift through the remains of the camp, which witnesses report was completely razed.

“We have counted 42 bodies so far, but we are still searching for others. The camp has been burned to the ground and people fled into the bush and to other [internally displaced persons] camps in the city," Etienne Godenaha, an Alindao legislator, told Reuters on Nov. 17.

Among the dead was Bishop Blaise Mada, vicar general of the diocese of Alindao, and the Rev. Celestine Ngoumbango, the parish priest of the village of Mingala. According to witnesses, Bishop Mada was gunned down during an assault on the bishop’s residence where he had taken refuge with others attempting to escape the gunmen. The charred remains of Father Ngoumbango was discovered the day after the attack.

More than 40 people were massacred on Nov. 15 during a guerrilla attack on the Cathedral of Alindao and an adjoining compound.

Sources in Alindao, a city about 180 miles east of the capital Bangui, told Vatican News that many displaced persons were burned alive inside their tents during the attack.

The disorder in C.A.R. was initiated by the overthrow of former president President Francois Bozize in 2013 by a primarily Muslim rebel force known as the Seleka. Since the breakdown of the central government, Christian and Muslim militia have engaged for years in tit-for-tat communal violence in the Central African Republic. The violence has continued at varying degrees of intensity despite the presence of a U.N. peacekeeping force.

In this latest attack, witness reported that U.N. peacekeepers, known as “Blue Helmets,” stood down as the assault on the cathedral and refugee camp began. “From what I have been told by my contacts, the Blue Helmets of MINUSCA did not defend the population from the rebels who committed the assault in Alindao. At the arrival of the guerrillas they went back to their base, leaving the population to their fate of death and destruction,” the Rev. Amos Boubas, a Central African priest studying in Rome, told Fides news service. MINUSCA is the French acronym for the “multidimensional United Nations peacekeeping operation” that has been dispatched to the troubled African state.

When U.N. “blue helmets” arrived, they did not intervene. “Everyone was left to their own devices, and the rebels had time to do whatever they wanted. And they did.”

Survivors believe the attack was orchestrated by former Seleka rebels of the U.P.C., Unité pour la Paix en Centrafrique, a militia commanded by General Ali Darassa, a leader of the Peul ethnic group. The Peul (known as Fulani in other African nations) are primarily pastoralists that have long been in conflict with Christian villagers in C.A.R. The attack on the cathedral was in apparent retaliation for the killing of Muslims the previous day by the Anti-balaka, as the primarily Christian and traditionalist counterforce to the former Seleka militias is known.

The Most Rev. Cyr-Nestor Yapaupa, Bishop of Alindao, is organizing the evacuation of survivors to Bangui. "I think that behind this serious episode, there are political reasons due to the fact that France presented a resolution to the U.N. Security Council to extend the mandate of MINUSCA for another year,” Father Boubas told Fides.

United Nations Secretary-General António Guterres said he stood in solidarity with people experiencing the continuing violence in C.A.R. and warned that attacks against defenseless civilians and UN “blue helmets” may amount to war crimes. “The Secretary General is greatly concerned at the rise in violence in recent days in the Central African Republic,” according to a statement issued on Nov. 17 by U.N. Spokesperson Stéphane Dujarric.

According to Vatican news, the refugee center, operated by the Diocese of Alindao, has a capacity of 25,000 and had welcomed displaced persons regardless of religion. It was established in an effort to foster the civil harmony in C.A.R. promoted by the church, especially following the apostolic visit to C.A.R. by Pope Francis in 2015.

Following the attack, Vatican News spoke with Father Mathieu Bondobo, the vicar general of the Archdiocese of Bangui. The attackers, he said “started burning tents, killing, looting people’s property.” Father Mathieu said the attacks appeared to be premeditated, in view of threats received by Bishop Yapaupa.

According to Vatican News, the bishop had notified U.N. peacekeepers of the threats he had received, but at the time of the attack the church’s facilities were undefended. When the “blue helmets” did arrive, they did not intervene. “Everyone was left to their own devices,” Father Mathieu said, “and the rebels had time to do whatever they wanted. And they did.”

“This is [the reason] for our anger, this is what causes sadness in our hearts,” he continued. “Humanly, yes, we are sad, but this attack cannot be a threat to prevent the church from fulfilling its mission. Indeed, the church remains strong. And we, who are still alive, continue to carry on this work.”

Since the Second Vatican Council, our Church, founded by Jesus, has encouraged ecumenical efforts with Christians as well as people of other faiths. As I understand matters, the violence that has caused such devastation in the Central African Republic (CAR) has its roots in a serious dispute between Christians (who make up half of the population) and Muslims (who make up about 15% of the nation's population). I may be naive, but while I support the presence of peacekeeping forces from the United Nations, according to this article, they unfortunately are maintaining a standoffish attitude towards protecting the Christian population. According to BBC News (11/30/15) when Pope Francis visited the CAR, he told worshippers in a mosque that "Christians and Muslims are brothers and sisters." My reading has informed me that the violence in the Central African Republic began in 2 013, when a Muslim military group overthrew the government. Since then, perpetrators of the violent conflict have been both Muslim and Christian militias/military forces.
According to a report in CRUX (April 14, 2018)a representative of Catholic Relief Services (CRS) said that although the situation is improving in the capital, Bangui, the violence is getting worse in the rest of the country. The government has been unable to move beyond Bangui; armed groups and militias have taken control over more than 70% of the nation. The United Nations reports that the conflict has left at least 1.1 million people destitute and homeless, with incredibly and tragically about 2.5 million people (more than half of the CAR's 4 million people in need of humanitarian assistance. I believe that the United Nations peacekeeping forces must do more to protect innocent men, women and children, and along with our Church and other religious groups, and a multinational effort to convince both Muslim and Christian military groups to find common ground between these two groups and have them agree to democratic elections that will restore the rule of law in the Central African Republic. In the meantime, I believe that Catholic Relief Services deserves the financial support of all good people to (the following is from Catholic Relief Services website): " (1) provide seeds, tools and training for farmers" . (2) " help for families to repair and rebuild their homes" (3) "opportunities for the poor to build savings and rise from poverty" (4) " activities for communities to repair relationships, build trust and foster peace. "

Re: The mainstream media.
That they report fake news is a lame argument. What bothers me is that they fail to report news like this in favor of "feel good" stories or those that just exacerbate political differences.

Tim
Thanks for your comments - they add to the article. Do you know why the UN peace keepers did not prevent this massacre?

This is really very nice blog and so informative

Your comment is totally inappropriate given the nature of this story and the human tragedy it tells.

To the Editors: Please monitor comments section in order to remove trolls, scammers and other nuisances!!!