African cardinal: Your iPhone is feeding the global arms trade 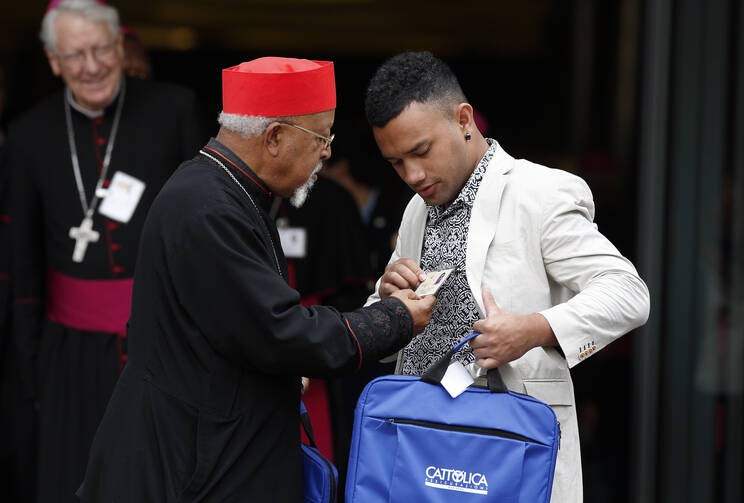 Ethiopian Cardinal Berhaneyesus Souraphiel of Addis Ababa checks out the name badge of Nathanael Lamataki, a youth delegate from the French territory of New Caledonia in the South Pacific, as they leave a session of the Synod of Bishops on young people, the faith and vocational discernment at the Vatican Oct. 5. (CNS photo/Paul Haring)

The head of the Episcopal Conference of Ethiopia and Eritrea wants young people in the United States to stand in solidarity with young people in Africa and elsewhere who suffer because of the global arms trade.

“Nowadays we are getting modern, sophisticated weapons from all over the world,” Cardinal Berhaneyesus Souraphiel told America and The Jesuit Post in a joint interview conducted in Rome on Thursday. “Where are these reaching? They are reaching wherever there are conflicts.”

He added, “Who is being killed? It is the young people,” and he called the global arms trade “big business” in Africa.

“Who is being killed? It is the young people,” said Cardinal Berhaneyesus Souraphiel, noting that the global arms trade “big business” in Africa.

The amount of money spent on weapons around the world is massive—and growing.

According to a report published earlier this year, the global arms trade is worth about $100 billion annually, with the United States dominating about a third of the market. Russia is number two, followed by France, Germany, China and the United Kingdom.

The United States’ involvement in the sale of weapons was in the news this week, as President Donald Trump said he is worried about applying pressure to Saudi Arabia over its alleged involvement in the disappearance of journalist Jamal Khashoggi, fearful that it could put at risk a U.S.-Saudi weapons deal.

In Africa, the amount of money spent on arms has actually dipped a bit in recent years, but experts point out that the figures in the report do not take into account smaller shipments of firearms.

Pope Francis has condemned the global arms trade repeatedly, including during his 2015 speech to the U.S. Congress, in which he said, “Why are deadly weapons being sold to those who plan to inflict untold suffering on individuals and society? Sadly, the answer, as we all know, is simply for money, money that is drenched in blood, often innocent blood.”

“In the face of this shameful and culpable silence, it is our duty to confront the problem and to stop the arms trade,” the pope added.

The archbishop of Addis Ababa is a delegate at the Synod of Bishops, a meeting of prelates, priests, sisters and lay auditors gathered in Rome from all around the world. The meeting is focused on young adults.

Cardinal Souraphiel, who was made a cardinal by Pope Francis in 2015, highlighted the role globalization plays in connecting young people in unjust ways.

He mentioned specifically the mining of coltan in the Democratic Republic of Congo. The metallic ore is used in the production of many consumer electronics, including laptops and cellular phones. Human rights abuses related to the extraction and sale of the material have been prevalent for decades in several African countries. The hunt for the lucrative ore also harms the environment, with unauthorized miners tearing up national parks.

“That means the youth in Europe or in America are using” goods whose production may have exacerbated conflict, harming young people in other countries, the cardinal said. He also cited textiles produced by child labor and said young people should speak out against these kinds of abuses.

“The Catholic Church, being such a universal church and being spread all over the world, could tell our youth to be critical in these situations and find out what is behind some issues affecting youth in Asia or America or South America,” Cardinal Souraphiel said.

During a press briefing earlier in the day, Cardinal Souraphiel also highlighted the need for Christians in Europe and other prosperous places to be more welcoming to migrants. But he added that efforts should be made to allow people to stay in their home countries.