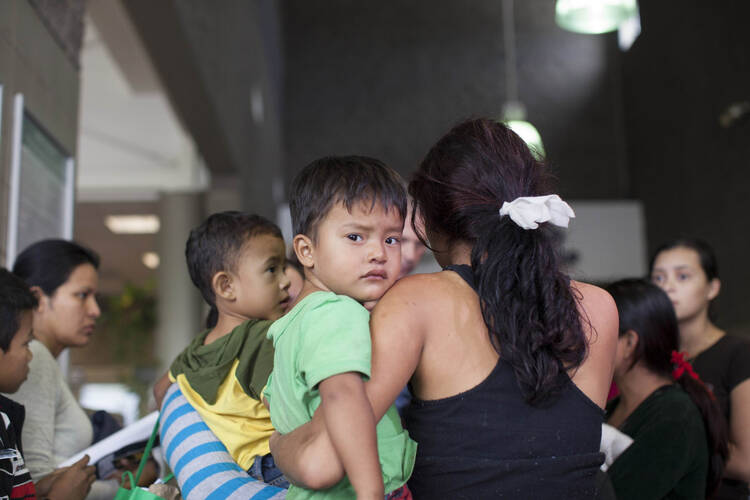 Migrants, consisting of mostly women and children, who disembarked from a U.S. Immigration and Customs Enforcement bus, wait for a Greyhound official to process their tickets to their next destination at a bus station in Phoenix, May 29. (CNS photo/Samantha Sais, Reuters)

Guadalupe García de Rayos had been an active member of her parish in Mesa, Ariz., before she was deported last year to Nogales, Mexico. That is where she met Sean Carroll, S.J., the director of the Kino Border Initiative.

Father Carroll spoke with Ms. García de Rayos and her children last year. “I could see the anguish and suffering on her face, the pain of the family,” he said. “It’s through contact with people like Guadalupe that we’ve seen, time and time again, the harmful effects of deportation.”

Those interactions led Father Carroll and the Kino Border Initiative, the Center for Migration Studies of New York and the Office of Justice and Ecology of the Jesuit Conference of Canada and the United States to undertake a study to better understand the effects of deportation on immigrants and their families. They hope the study will, among other things, inform legislators ahead of the Dec. 7 federal budget deadline.

The mixed-methods study, “Catholic Removal Impact Survey of Society,” surveyed 133 deportees. It found that more than half of deported respondents entered the United States as minors—21 percent of whom were under age 10 when they arrived. A quarter of deportees surveyed owned homes, and on average they had lived in the United States for nearly 20 years.

“Deportation...impoverished the affected families and the lives people had made in the United States.”

“One of the defining features of the [Trump] administration’s immigration policy is that it doesn’t meaningfully prioritize [those who are deported],” according to Donald Kerwin, the executive director of the Center for Migration Studies. “This has led to the increased deportation of persons who have lived for long periods of time in the United States, have developed strong family and other ties in the U.S., and either don’t have criminal records or have committed minor, nonviolent offenses.”

“Deportation really affected these ties, and we found that it really impoverished the affected families and the lives people had made in the United States,” he said, adding that on average immigrants had $142 with them when they were deported. “Most reported that their spouse or partner didn’t have enough money to support their children in the U.S.—74 percent—or didn’t have enough money to live on.”

Also, three-quarters of respondents reported that they planned to return to the United States, a finding Mr. Kerwin was not surprised by given their U.S. ties.

“The administration has been quite intentional in trying to instill fear in immigrant communities as part of its enforcement strategy,” he said. “It’s conflated undocumented immigrants with violent criminals over and over again.”

“The administration has been quite intentional in trying to instill fear in immigrant communities as part of its enforcement strategy.”

Just over half of deportees reported having been convicted of a crime and just over 10 percent were convicted of a violent crime, as defined by the National Crime Information Center’s uniform offense codes.

The degree to which local police stopped and arrested immigrants, often as a pretext to deportation, was particularly troubling, according to Mr. Kerwin. “This will almost certainly lead immigrants to avoid the police, including by not reporting crimes. It also isolates and further terrorizes immigrant communities.”

More than 60 percent reported their deportation began with a police arrest, and a majority of arrests happened when the respondents were driving, at home or at work.

“So really there is no safe space for immigrants,” Mr. Kerwin said. Respondents did see their faith communities as welcoming, but some raised concerns that they were not doing enough.

In addition to the 133 deportees who were interviewed at the Kino Border Initiative migrant shelter in Nogales, the study also included 20 interviews with members of deportees’ parish communities in Florida, Michigan and Minnesota. Respondents were interviewed during the first five months of 2018.

“What they are doing is stopping and arresting people that shouldn’t be stopped and arrested.”

Joanna Williams, the director of education and advocacy for the Kino Border Initiative, said the organizers of the study hope it will lead the Department of Homeland Security to deprioritize the arrest and removal of long-term residents, individuals with family in the United States and those with no criminal records or only minor offenses. Other recommendations include:

Among the 133 respondents, the study found that 38 percent had legal status in the United States, including 14 percent of whom were green card holders. Yet Mr. Kerwin was not surprised by that finding.

The number of legal immigrants who have been deported has been on the rise since 1996, the year President Clinton signed the Illegal Immigration Reform and Immigrant Responsibility Act.

“It expanded the grounds of removal,” Mr. Kerwin explained. It increased the number of crimes for which immigrants could be deported and lose their legal permanent residency. Studies have documented how the 1996 measure transformed immigration enforcement.

Today, D.H.S. should issue clear priorities on enforcement, according to Mr. Kerwin.

“What they are doing is stopping and arresting people that shouldn’t be stopped and arrested,” he said. “They have been here, they are productive, and they are not threatening anyone.”

This story was updated to correct the spelling Guadalupe García de Rayos's name.

Where else but here does Matthew 25:36-41 apply? Yet more venom is directed by so called religious people at disadvantaged immigrants than those who charge thousands of dollars to attend the National Prayer Breakfast. Those "officials" in religions will receive a greater punishment as Jesus warned.

more heart tugging photos of mothers and babies--they are certainly "productive" alright! might this have anything to do with an irresponsible Church's preachings against birth control to the poorest people on the continent who can least afford to have or responsibly raise large families?

Sovereign nation's have both the right and the obligation to control their borders and those who cross them. Foreign nationals who think they are above our laws must be brought to justice, no matter how long they have evaded detection. We must be fair to legal immigrants but more importantly to our fellow citizens who don't wish to have America become overpopulated and culturally balkanized beyond recognition.

I come from a family of immigrants and so did my husband. I live in the city and love the cultural enrichment new immigrants bring. I especially appreciate the love of family and respect for the unborn that many embrace. But I, like many legal immigrants, even new ones, recognize that the rule of law safeguards us all. Maybe the old rules of Ellis Island are archaic, but should we really throw health and other critical screenings out? Should we not take into account how they plan to survive after coming here ? Where are the guidelines? The Democrats have rebuffed attempts to draw reasonable parameters around the process . They just want to make political hay.

We can put a man on the moon at times using no more technology as a slide ruler but we can’t figure out a humane Immigration Policy from our fearless college educated leaders. I would like to start hearing some sensible solutions to Immigration other than a huge tax breaking Prison Wall. Religious Leaders need to start meeting and prepare an Immigration Solution that does not include Open Borders and the Great Boarder Wall of Mexico.