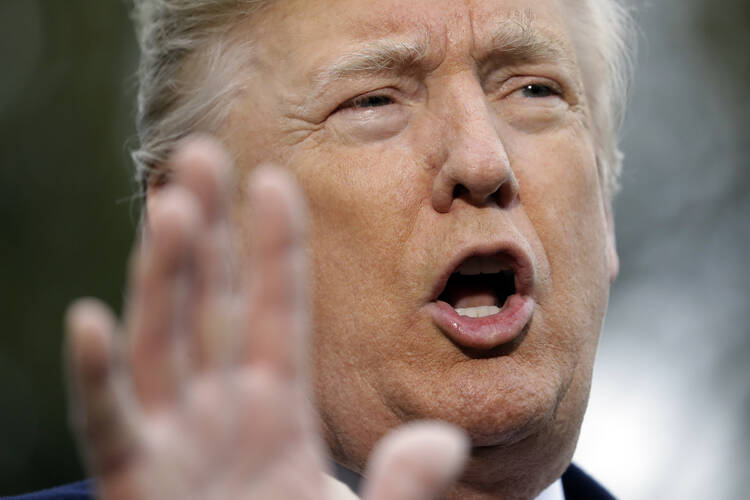 President Donald Trump talks to the media before boarding Marine One on the South Lawn of the White House, Friday, Nov. 9, 2018, in Washington. (AP Photo/Evan Vucci)

Those who cross the border illegally will be unable to claim asylum after President Trump signed a proclamation limiting such claims on Friday. The measure is intended to circumvent laws that allow migrants to apply for asylum independent of how they arrive to the United States.

“We need people in our country, but they have to come in legally and they have to have merit,” Mr. Trump said Friday as he departed for Paris, according to the Associated Press.

Through the proclamation, Mr. Trump is exercising powers he previously tapped to implement the travel ban against some Muslim-majority nations. While that ban was challenged in court, the Supreme Court ultimately upheld the president’s authority to enforce the ban.

“It’s illegal,” according to Reena Arya, a senior attorney with the Catholic Legal Immigration Network. The Immigration and Nationality Act, she said, specifically states that anyone who enters the United States can apply for asylum, regardless of how they arrive.

“We need people in our country, but they have to come in legally and they have to have merit,” Mr. Trump said.

“Where does he get his legal authority to do something like this? He doesn’t have it,” Ms. Arya said.

In response to the president’s action, the American Civil Liberties Union, the Southern Poverty Law Center and the Center for Constitutional Rights filed a lawsuit against the Trump administration on Friday, The Hill reports.

“Neither the president nor his cabinet secretaries can override the clear commands of U.S. law, but that’s exactly what they’re trying to do,” Omar Jadwat, the director of the A.C.L.U.’s Immigrants’ Rights Project, said in a statement. “This action undermines the rule of law and is a great moral failure because it tries to take away protections from individuals facing persecution—it’s the opposite of what America should stand for.”

Rules around asylum seeking are not only a matter of U.S. law. In 1948, the United Nations recognized the right of individuals to seek asylum from persecution in other countries. According to its 1951 convention on refugees, the U.N. prohibited asylum seekers from being detained simply for seeking asylum. The convention also recognized that seeking asylum may require individuals to “breach immigration rules.”

“Where does he get his legal authority to do something like this? He doesn’t have it,” Ms. Arya said.

“Refugees are going to countries all over the world,” Ms. Arya said. “They are given an opportunity to apply for asylum. To be considered a refugee, according to the Immigration and Nationality Act, a person would have experienced persecution or a well-founded fear of persecution on account of race, religion, nationality, membership in a particular social group or political opinion.”

The president’s proclamation comes in part as a response to the migrant caravan, a group of thousands of Central Americans who are making their way through Mexico toward the United States. Reports of the actual number vary, with thousands having already accepted worker visas or asylum from Mexico.

“The arrival of large numbers...will contribute to the overloading of our immigration and asylum system and to the release of thousands...into the interior of the United States,” Mr. Trump said in the directive. More than 330,000 applied for asylum in the United States in 2017, according to the Associated Press, nearly double the number two years earlier and surpassing Germany as highest in the world.

Nevertheless, it has been more difficult to obtain asylum in the United States under the Trump administration. In April, Secretary of Homeland Security Kirstjen Nielsen said the administration would address “the rising level of fraud that plagues our system,” noting an increase in asylum claims overall in the last five years, including claims from families and unaccompanied minors.

Last year, the Trump administration changed the threshold that establishes a “credible fear” justifying asylum status. According to Clinic, asylum seekers now have to establish that their story is credible by a higher standard of a “preponderance of evidence” rather than the lower standard of “significant possibility.”

Material from the Associated Press was used in this report. This story has been updated.

I have a question for the author. How many people in the world could ask for asylum according to the criteria listed? 3 billion, 4 billion, 5 billion people? More?

By International conventions asylum seekers must seek asylum in the FIRST country they enter. Mexico has offered asylum to those now in their country but the so-called asylum seekers refused it. The USA is under no obligation to accept them.
Furthermore the SPLC is one of the leading organizations that in itself
is a, if not the leading, "hate" group in the USA.
Has the author ever bothered to review the hundreds of organization, including many
Catholic/Christian/Jewish organizations that are identified or branded "Hate groups"
by the SPLC?I
https://en.wikipedia./wiki/List_of_organizations_designated_by_the_Southern_
Poverty_Law_Center_as_hate_groups#Christian_Identity
The hate mongering of the SPLC is receiving public attention and I have
provided below several websites that point this out:
https://afa.net/the-stand/culture/2017/08/splc-is-the-most-dangerous-hate-group-in-america/
http://www.powerlineblog.com/archives/2017/06/our-leading-hate-group.php

E. Patrick Mosman---The SPLC has been a good pioneer in tracking hate groups even though there are some legitimate questions about some groups on its list. However, the American Family Radio (AFR) that you listed is part of the American Family Association, (AFA) which is a notoriously right wing hate group itself. Thus the AFR is not qualified to judge the SPLC.

The AFR/AFA has published or claimed the following, “GAYS SHOULD FACE LEGAL SANCTIONS” and “IT’S THE FAULT OF AFRICAN AMERICANS THAT WHITE PEOPLE ARE RACIST.”

The AFR/AFA opposes other religions. It objected when Keith Ellison, a Congressman and a Muslim, used the Koran at his swearing into Congress.
It objected when the U S Senate invited a Hindu to open the Senate with a prayer.

The AFR/AFA’s former Director of Issues Analysis, Bryan Fischer, stated that black people "rut like rabbits"; that the First Amendment applies only to Christians; that Hispanics are "socialists by nature," and that "Homosexuality gave us Adolf Hitler and homosexuals in the military gave us the Brown Shirts, the Nazi war machine and six million dead Jews."

The AFR/AFA eventually denounced SOME of Fisher’s statements only after it became too public.

You apparently disapprove that the SPLC has listed Christian Identity. Have you researched this group? It is infamously known as
a racist, anti-Semitic, and white supremacist group. Its theology promotes a racial interpretation of Christianity. It claims that Jews are imposters and the children of the devil and that Christianity is a religion exclusively for white people only.

You can read the Christian Identity’s bigoted beliefs at its blog. See http://www.thechristianidentityforum.net/index.php?/topic/52338-statement-of-faith/

How is it possoible for an asylum seeker to cross the b0rder "illegally"? The US legal cde clearly states that an asylum seeker can file for asylum no matter where he or she crosses the borders, at designated points or any point that is not designated." Asyum is traditionally based on viloence or a clear threat of violence against the asyum seeker by the seeker's nativebgovernment or covert forces that reasonablt can be sen asv acting on the orders or the provocagtion of the seeker's government. When the seeker's plight based on natural or man made accidental disaster the normal response is humanitarian aid, not asylum.

I am aware that a substantial fraction of the self-defined population of Christians in America believe the end is approaching rapidly, the anti-Christ is either here already or coming soon and the universal peace is coming prior to the end of the world BUT - do US Catholics really think it is the duty of the faithful to bring all this about, or hasten the process in some way?

When I consider that the UN, the EU and Islam are all agents intending taking the whole of the population of the planet down that route, I cannot believe the RCC ought to be in the same conspiracy.

One world government, bad idea. Dissolving boundaries of nations, states and countries, terrible idea.
You do know that their consensus is to cut the world population down to about one billion people, that they are using the false threat of catastrophic worldwide overheating to obtain universal acceptance of forced abortion, sterilisation and euthanasia and destruction of the world economy by the rationing of energy?

There is a large group of people who want a world government with socialism. That is the one unifying idea that permeates what the Jesuits on this site push. They are not looking for an end time but a heaven on earth. They are fools but that is what explains everything on this site.

Our academic pursuits, along with a range of extracurricular activities, help in honing a child's skills and ensuring that he/she grows to be a mature and responsible citizen.
best cbse school in greater noida
Admission 2019 Top school in Greater Noida

The fact is that our nation has an immigration enforcement issue. We have numerous people entering the country – visiting the nation as a tourist, walking across a border, arriving as crew on a vessel - who remain without appropriate documentation. We cannot absorb the world’s poor, tyrannized, and victimized within our borders. There isn’t enough land or wealth to do that. The fault lies with our Congress and President. No one wants to create the systems and policies to enforce the immigration rules.

“We need people in our country, but they have to come in legally and they have to have merit,” said Trump in Paris. Now we have a president who exploits the immigration enforcement issues to his political advantage, a deeply cynical politics that has diminished our nation’s values – law, order, decency, democracy, human rights – in ways heretofore less obviously stated and enacted. He now proposes, in contradiction to international law, Congress, decency and Judeo-Christian morality, to effectively lessen and/or eliminate opportunities for refugees and asylum seekers to enter the USA. And no Catholic religious leader hurls an anathema at him? Too many of our Catholic clergy and bishops have become silent and effectively tacit supporters to what is happening.