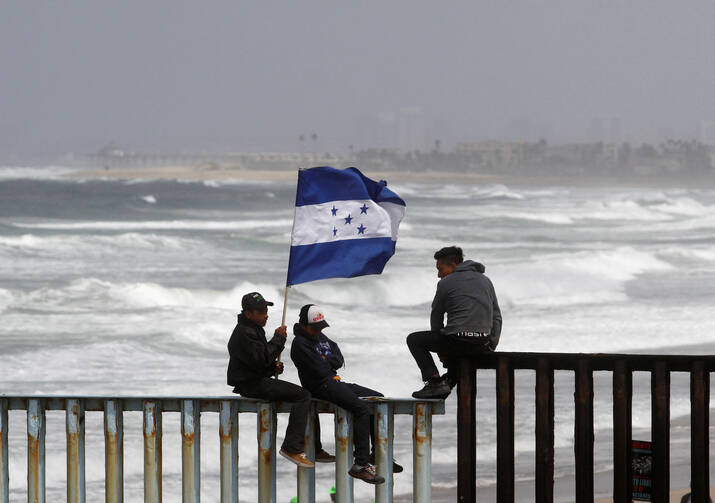 People hold a Honduran flag while sitting on the border fence between Mexico and the United States in Tijuana, Mexico, April 29. The Trump administration was set to decide in early May whether Honduran holders of a special immigration status will be able to remain legally in the country. (CNS photo/Jorge Duenes, Reuters)

WASHINGTON (CNS) -- Catholic leaders were angered and disappointed by the Trump administration's May 4 decision to end Temporary Protected Status, popularly known as TPS, to more than 57,000 Hondurans living in the United States.

Hondurans who arrived in the United States after their country was devastated by Hurricane Mitch in 1998 now have until Jan. 5, 2020, to return home.

"Anyone who has been to Honduras in recent months knows we are sending innocent people back to one of the most chaotic and dangerous places in the world," said Bishop Mark J. Seitz of El Paso, Texas, via Twitter May 5. "We have clearly lost our moral compass."

The U.S. Department of State has a travel advisory for Honduras on its website, saying "violent crime, such as homicide and armed robbery, is common. Violent gang activity, such as extortion, violent street crime, rape, and narcotics and human trafficking, is widespread. Local police and emergency services lack the resources to respond effectively to serious crime."

However, the Department of Homeland security in a statement does not mention the violence and refers only to conditions related to Hurricane Mitch, which brought a flow of migrants north.

"Anyone who has been to Honduras in recent months knows we are sending innocent people back to one of the most chaotic and dangerous places in the world," said Bishop Mark J. Seitz of El Paso, Texas, via Twitter May 5.

Homeland Security Secretary Kirstjen M. Nielsen said in a May 5 statement that the decision to end TPS for Honduras "was made after a review of the environmental disaster-related conditions upon which the country's original 1999 TPS designation was based and an assessment of whether those originating conditions continue to exist, as required by statute."

Since 1999, those conditions "have notably improved," the statement continued.

Catholic groups and leaders, however, insist that other conditions, including violence and economic troubles, make a return dangerous.

"The administration's decision to end TPS for Honduras is untenable. Returning tens of thousands of people to a country with a staggering unemployment rate, high rates of violence, and few available resources to support them could quickly become a tipping point for communities," said Conor Walsh, the country representative in Honduras for Catholic Relief Services.

He said those who are forced to return will be separated from family and could be targeted by gangs for extortion.

"This decision, as well as previous determinations made for El Salvador and Haiti, will undermine ongoing efforts to address the root causes of migration and violence, and in doing so, lead to more," he added.

"Our government is out of sync with our values. Our neighbors, friends and co-workers are constantly coming under assault from this administration because they were born in another country. But isn't that why the United States of America was founded? The soul of our nation is being tested," said Lawrence Couch, director of the National Advocacy Center of the Sisters of the Good Shepherd, in a May 4 statement.

Couch was part of a team that traveled to Honduras as part of an Emergency Interfaith Delegation that accompanied Honduran human rights defenders as they mobilized and demonstrated against the presidential election in November. The election came under question when the vote count suddenly stopped and the candidate that was losing subsequently emerged as the winner.

"Since the November election, Honduras has seen widespread civil unrest and protests. Human rights and religious leaders have been threatened and the media harassed. But most in the United States have not noticed," Couch said. "Now we have 50,000 residents and their families in the United States who are being forced back to this dangerous regime."

Jeanne Atkinson, executive director of the Catholic Legal Immigration Network, said the Trump administration attempted to paint a picture that it had "no choice but to terminate TPS," suggesting that past administrations that extended the protected status for Hondurans had not properly applied the law.

"To the contrary, it is the Trump administration's action that disregards the law and the intent of Congress in creating TPS in the first place to safeguard human lives," she said.

"The termination of TPS for Honduran nationals is both disgraceful and immoral."

Catholic Legal Immigration officials have been urging the Trump administration to grant an 18-month extension of TPS to Hondurans based on the continuing humanitarian crisis. The group notes that amid efforts to recover from the hurricane and other natural disasters, Honduras has been plagued by a housing deficit of 1.1 million homes, lack of access to safe drinking water that affects 638,000 people and a food shortage that leaves 25 percent of the country's children under age 5 chronically hungry.

Mercy Sister Patricia McDermott, president of the Sisters of Mercy of the Americas, was similarly disappointed with the decision announced May 4 by Nielsen, the U.S. Secretary of Homeland Security.

"The termination of TPS for Honduran nationals is both disgraceful and immoral," she said. "Many of these individuals have been in the U.S. for 20 years, raising families and creating vibrant communities. Forcing their return to a country that is wracked by endemic violence and poverty will put their lives in danger, separate families, and have devastating effects on communities both in Honduras and the United States."