South Africa is seeing a spike in protests. Will the government finally address economic inequality? 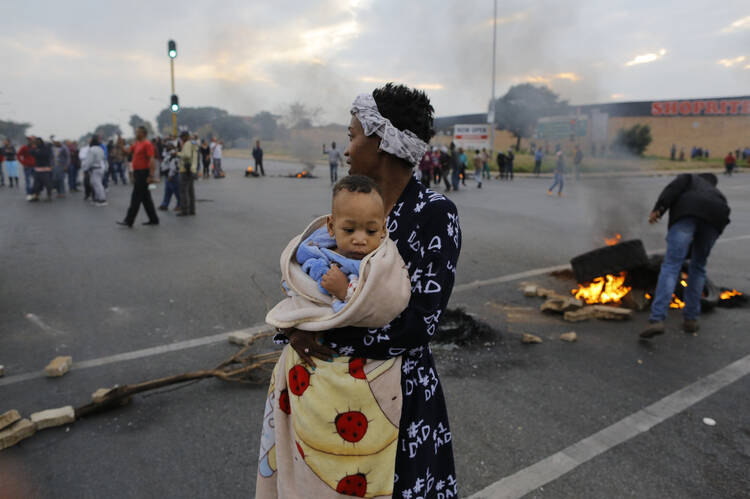 A mother and child join a housing and land protest in Johannesburg in May 2017. (CNS photo/Kim Ludbrook, EPA)

International news reports highlight the fact that in 2018 South Africa has experienced a spike in protests. The disturbances are rooted in poverty and public dissatisfaction with government delivery of basic services like electricity, water and public housing. Reuters reports that there were 198 “service delivery protests” by the end of September, surpassing the previous record of 191 in 2014 when former President Jacob Zuma was still in power.

On a theoretical level, these protests should not be a surprise. From the 19th century’s Alexis de Tocqueville to 1970s U.S. political scientist Ted Robert Gurr, empirical studies report that riots and revolution occur during a time of rising public expectation and frustration at what is called “relative deprivation.” It is not, the theory proposes, during a time of intense tyranny and repression that revolt occurs: It is when repression eases and dictatorship falters.

This accords with South African history. On closer examination, the historical foundation of these protests can be located in the 1994 transition to democracy. Unprecedented mass resistance grew and intensified in the early 1980s as the ruling National Party introduced limited reforms to apartheid. Protests made the country ungovernable and created the conditions for a democratic transition, achieved in 1994.

As this transition occurred, public expectations grew that the transition’s political settlement could not realize. The African National Congress’ election slogan was “A Better Life For All!” The vast majority of South Africans who voted the A.N.C. into office took the party at its word. They believed they would shortly see public housing, jobs, land reform and a basic welfare system, all of which would build a more equitable society denied to them under apartheid.

While a new black middle class has emerged, while the politically connected got rich, some even becoming billionaires, the vast majority of South Africans remain poor.

They were mistaken. While the A.N.C. under Nelson Mandela and his successors, guided by one of the most progressive constitutions in the world, introduced welfare services, tried to build public housing, expanded the electric grid in South Africa and introduced economic empowerment and affirmative action policies, the great and expected equalization never happened.

While a new black middle class emerged and grew, while individuals (many of them politically connected) got rich, some even becoming billionaires, the vast majority of South Africans remained poor. Through a mixture of corruption and mismanagement, public resources were wasted. Having rejoined the world community, South Africa’s economy (stagnant, if not collapsing, in the late 1980s) also became vulnerable to the vicissitudes of global markets.

And despite putting a massive chunk of its annual budget into education and skills training, a poisonous cocktail of corruption and inefficiency has meant little improvement in national education to this day. The result is a new generation of poorly educated and often unemployable youth who have few prospects of escaping poverty. The national unemployment rate—between 25 and 30 percent, depending on how you measure it—is higher than the rate experienced in the United States during the Great Depression of the 1930s at its worst. It reaches astronomic proportion in the 15-to-25 age group.

South Africa was—and is—caught in a vicious economic cycle. Battered by more competitive countries in the global market, it has suffered the decline or demise of many economic sectors. The pain has been compounded by a poor work ethic rooted in frustrated high expectations, the latter enabled by labor militancy. In sectors where the economy is growing—or at least could grow—the skills deficit, traceable to poor education, hampers growth.

Neglected or overstretched state infrastructure has exacerbated the problem, with massive levels of corruption draining funds that could be used to invest in infrastructural improvements.

It is not surprising, then, that people are angry. Promised the moon, they barely eke out an existence, while the old (mostly white) and new (mostly black) middle class seem to be doing all right, and the old and new super-rich—South Africa’s equivalent of the “1 Percent”—appear to thrive. In this context many “morbid symptoms,” as political theorist Antonio Gramsci would say, have emerged, often with a xenophobic and racial hue. Populist politics is growing apace.

The A.N.C. is losing favor, though opposition parties do not seem to be gaining followers. The Democratic Alliance is seen as a party of the elite in general and whites in particular. (In all likelihood, too, its free market economic policies are simply unacceptable to the poor).

The rhetorically left-wing Economic Freedom Fighters have not gained sufficient popularity outside some urban areas to realistically be seen as a “government in waiting” as the country heads to the 2019 general election. And with its enthusiasm for Venezuelan-style “reforms,” experts see such a government as the potential coup de grace to South Africa’s economy.

Truth be told, there are no easy solutions to socio-economic malaise in South Africa. In the meantime daily frustration sometimes boils over into violent protest. Their expectations denied, the poor are resorting to what Martin Luther King Jr. once called “the voice of the unheard.” It is a painful irony that this cry for justice and liberation, of course, makes South Africa even more unattractive to much-needed investment.