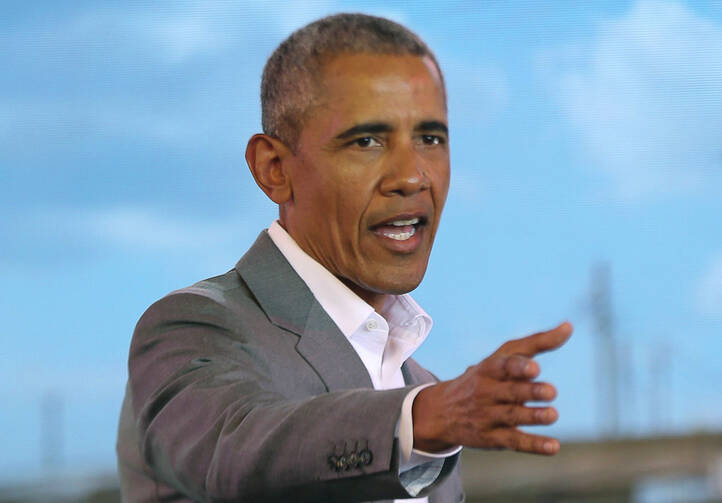 Clearly buoyed by the multiracial crowd that frequently interrupted him with resounding applause, Mr. Obama gave what some commentators consider his most important speech since he vacated the Oval Office in January 2017. With passion and reason, Mr. Obama noted that in the century since Mandela’s birth humanity had developed a new and inclusive vision, despite all attempts, past and present, to roll it back.

“More and more peoples,” he said, “having witnessed the horrors of totalitarianism, the repeated mass slaughters of the 20th century, began to embrace a new vision of humanity, a new idea, one based not only on the principle of national self-determination but also on the principles of democracy and rule of law and civil rights and the inherent dignity of every single individual.”

Obama gave what some commentators consider his most important speech since he vacated the Oval Office.

Despite terrible setbacks, he continued, these values have become integral to humanity’s sense of self from the local to the global level, not simply in the embrace of democracy as the norm but in economic terms: not simply market-based economies in an open global system but also principles of welfare and labor rights. This progress is also seen in the rejection of discrimination against persons based on race, religion and gender.

He noted, too, the problems humankind faces at this time. Discrimination is still real. Inequality persists. “A few dozen individuals,” he said, “control the same amount of wealth as the poorest half of humanity. That’s not an exaggeration; that’s a statistic.” Far-right business interests use economic clout to manipulate elections, drawing on populism to generate a “politics of fear and resentment” that seeks to undermine a century of democratic gains.

Though he never mentioned his successor by name, he noted, “Strongman politics are ascendant suddenly, whereby elections and some pretense of democracy are maintained—the form of it—but those in power seek to undermine every institution or norm that gives democracy meaning.”

“Unfortunately, too much of politics today seems to reject the very concept of objective truth. People just make stuff up.”

Everyone knew he was alluding to President Trump. For South Africans, it could also have applied to former President Jacob Zuma.

In contrast, Mr. Obama stated what he believed in: “I believe in Nelson Mandela’s vision...a vision shared by [Mahatma] Gandhi, [Martin Luther] King and Abraham Lincoln...a vision of equality and justice and freedom and multi-racial democracy, built on the premise that all people are created equal, and they’re endowed by our creator with certain inalienable rights.”

“We have to follow Madiba’s example of persistence and hope.”

Mandela’s vision, he concluded, offers a few “guideposts” for the current struggle for a more just and inclusive future.

First: “Those of us who believe in freedom and democracy...have to fight harder to reduce inequality and promote lasting economic opportunity for all.” Mandela reminds us, he said, “that some principles really are universal—and the most important one is...that we are bound together by a common humanity and that each individual has inherent dignity and worth.” He reminds us that “democracy is about more than just elections.”

More people in Hong Kong are thinking of leaving. Why?
Hong Kong contributor

Finally, Mr. Obama said, “We have to follow Madiba’s example of persistence and hope.”

As I watched Mr. Obama, the historian in me recalled another speech by a U.S. public figure in South Africa, way back in 1966: Robert F. Kennedy. To my delight, Mr. Obama alluded to that historical moment in his speech. It reminded me that the problems faced by South Africa mirror the problems of the United States. In Barack Obama, I sensed someone who understood this, too.

The vision of inclusion, tolerance and dialogue—what we in Africa call Ubuntu—that permeated Mr. Obama’s talk recalled to many of us Nelson Mandela at his best. In this diminished political era, we saw true statesmanship again, and the chilly South African Highveld winter was warmed by a bit of the old Madiba magic that we have missed for so long.

"Abraham Lincoln...a vision of equality and justice and freedom and multi-racial democracy"
That's a misunderstanding of American history. Lincoln was not an Abolitonist. he invaded the South to preserve the Union.

The rebels might disagree with you.
Lincoln opposed the westward spread of slavery to the territories and wanted it contained in the southern states. He was enough of an abolionist to provoke secession upon his election. He may have initiated military action immediately to preserve the union, but the southerners wanted slavery for its economic benefits. It was all about slavery for the southerners.

Really? We have to share the author’s infatuation with a man whose only legislative accomplishment as a state senator in Illinois was to cosponsor a bill criminalizing the action of anyone who would give first aid to a baby who survived an abortion? How bankrupt must a mind and soul be to look to Obama as a source of wisdom?

See youtube video I linked to above, It is an interview with Trump just before the 1980 elections. See what he has to say about politicians, especially ones with big smiles.

The Natives Land Act of 1913 gave 87% of South African land to Europeans, about 20% of the population. Following the act and other legislation, miner wages fell, then stagnated and in 1961 were less than those of 1911. South Africa became the world's most unequal country over that period. Between 1904 and 1926 blacks were banned from skilled jobs in the economy and the ban lasted until the 1980s. By 1940, all blacks had been disenfranchised.

The above was excerpted from “Why Nations Fail” by Daron Acemoglu and James Robinson.

Ubuntu is inscribed into the Boston Celtics 2007-2008 NBA championship rings.

awesome stuff!!
Thanks a lot5 for sharing.
Terrariumtvforpc

Thank you Anthony Egan, for an insightful article. Whatever their professed religious beliefs, Mandela and Obama are role models for politicians and ordinary citizens of every country that calls itself democratic.

Obama is obviously more human than trump. You can tell by his sense of humor. It is broad and self-deprecating. trump only smiles when he's verbally slitting someone's throat. I would be comfortable meeting Obama. trump is the sort I avoid. That being said, both parties are corrupted by money and Obama was part of that system. Only an instant runoff vote will liberate us. I can't understand why anyone of any political stripe would object to that. Unless, of course, they benefit financially from the status quo.

Thanks for sharing.I found a lot of interesting information here. A really good post, very thankful and hopeful that you will write many more posts like this one.
- happy wheels

Libya, oh how we who actually care about human rights and real human progress weep for you. You, brought low - your leader assassinated by neo-lib globalists served by Hillary Rodham Clinton and Barrack Hussein Obama. Now we literally have black slave markets in what was, prior to this heinous rape of a country, the most prosperous of African Nations, while at the same time, white South African farmers are being murdered and their land taken, because, well, they're white, and this at the encouragement of the South African President. Cyril Ramaphosa, http://www.dailymail.co.uk/news/article-5450559/South-African-president-vows-transfer-land-whites-blacks.html Could there be a WORSE example of human progress parading itself as multiculturalism. Shameful indeed is the history of South Africa, but the present does not much to eclipse and replace that shame, quite the opposite, sad to say. Nice we have white libs co-signing and virtue signaling, what do you expect, that is what they ALWAYS DO.

Hopefully Obama will remain in South Africa and not return to USA.
Mike Weaver

Hopefully Obama will remain in South Africa & not return to USA.

If I wanted to live forever I would choose hypocrisy for my diet. This article unfortunately predictably inflames everyone's own point of view. To venture one point - Democracy - does that not include dialog from all sides?

South Africa is trying to move on from an extractive economy and extractive institutions. It’s not easy, it’s not quick and it’s not often successful. The outcome is rarely predictable. South Africa topped the list of the world’s most unequal countries in 1961. According to the World Bank, South Africa still holds that spot.

In the U.S., the 13th amendment ended slavery in 1865, but 90 years later, Rosa Parks was arrested for riding in the front of a bus. Some may recall Notre Dame’s Father Hesburgh's appointment to the Civil Rights commission in 1957. The commission, including several blacks, was unable to find a hotel due to segregation laws. President Eisenhower intervened, and the Commission met at Maxwell Air Force Base.

Where's the "puke emoji." Even liberals are waking up to the mess that Obama's 8 year term left this nation in. When will he just disappear already?