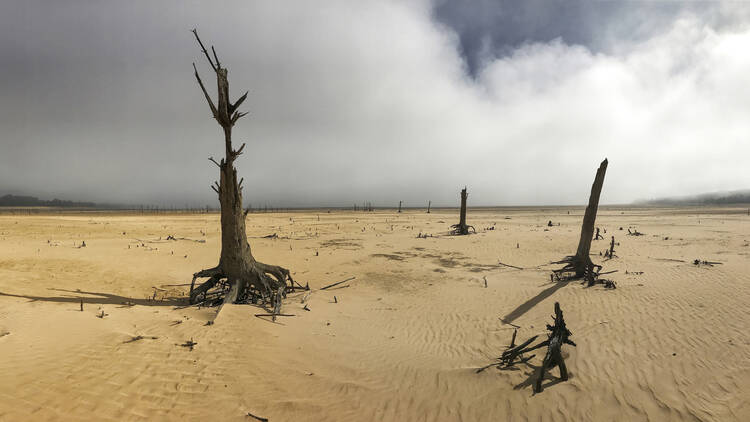 Cape Town, the first city established in modern South Africa and the country’s second-largest municipality, is running out of water. In a few months or weeks, depending on how closely its citizens adhere to rigorous water restrictions, there will be what residents are calling Day Zero: Capetonians will turn on the taps and nothing will run out.

This is a social, economic and political disaster for Cape Town. And as water shortages spread to other parts of southern Africa, it is a disaster for the region. There were signs of this crisis going back decades, but it seems that no one chose to notice.

The pattern we are seeing across South Africa is part of the global phenomenon that scientists call climate change, and it is a situation exacerbated by global population growth: More people equals more water consumption. As in other parts of the world, the natural disaster is compounded by the disaster of poor leadership and political shortsightedness.

The Climate System Analysis Group at the University of Cape Town has been monitoring rainfall in South Africa’s Western Cape Province for decades. It has found a steady and systematic decline in rainfall over the past 40 years. The winter rainy season—in the Southern Hemisphere this is between roughly April and August—has yielded less and less water for dams in the province.

The scientists’ evidence confirms the life experience of Capetonians. As a child in the city during the 1970s, I recall much rainier winters than in the late 1980s. Though I left Cape Town in 1990, family and friends who live there frequently note that there is less and less rain each year.

In short, no one in Cape Town or the Western Cape governments should feign surprise. The evidence has been there all along.

It is not hard to imagine water riots breaking out in parts of the Western Cape as aggrieved citizens demand more than their rations.

Meanwhile, the Western Cape has been experiencing steady population growth. Cape Town itself increased its population by 2.6 percent between 2001 and 2011, reaching a metro population of 3.75 million. Beyond the centuries-old farming industry, the region has become a center of commerce, research, education and new industries—most notably information technology and, more recently, biotech. It is also a global tourist hub, drawing tourists from around the world.

All this is now at risk because of a lack of water. The solutions envisioned at the moment—trucking in water, putting individuals on rations—seem haphazard at best, and at worst, a potential for conflict. It is not hard to imagine water riots breaking out in parts of the Cape as aggrieved citizens demand more than their rations.

Beneath the region’s veneer of almost-European gentility lurks a demimonde of organized crime (most apparent in the poor townships on the edge of the city) that will no doubt use the crisis to its financial advantage. And for corrupt civil servants the crisis will be a godsend: another way to subvert the law, by providing extra water in return for bribes.

Desalination and other alternative approaches to accessing water should have been started long ago, not just in the last two years.

I have also heard that entrepreneurs in more water-abundant areas of South Africa (like Kwazulu-Natal) are planning to set up private water-transportation companies to supply the Cape’s more affluent citizens. The result would be that those who can afford it will get water, and the “have nots” will go without.

Naturally the authorities will try to prevent these crises. There is already talk of police and army assistance in managing emergency water distribution. In fairness, the Western Cape government is considered less inefficient or corrupt than other provinces in South Africa. But it is an open question whether it can prevent social crisis.

The ruling Democratic Alliance in the city and province will be pilloried by other parties, no matter how it handles the crisis. That it runs what are considered the least corrupt governments in South Africa will have little or no effect. That the party inherited the problem from both the pre-1994 apartheid era and periods of African National Congress mismanagement will also be overlooked. There is no doubt, too, that the attacks will be swiftly racialized by claims that water distribution policies privileged businesses and the wealthy over the poor majority.

That the present city and provincial governments deserveto be challenged over the water crisis is, however, true. Desalination and other alternative approaches to accessing water should have been started long ago, not just in the last two years, and the process of approving desalination plants should have gone much faster.

Doing nothing is not an answer. Placing one’s faith in the promise of an evangelist that there will be rain by March is irresponsible. Even if divine mercy is shown by then, the sheer amount of rain needed not only to keep water running in the short term, but also to make the Western Cape rain-sustainable, is such that we would need deluges for years to come.

The truth is that the Western Cape (and indeed South Africa) can no longer rely on rain for its water supply. In an environment like the Western Cape, where rainfall trends show clear signs of climate change, desalination should have been a priority before the situation reached crisis proportions. Yes, desalination is expensive and will increase the cost of water to citizens. But in an age of global climate change this is inevitable. If humanity is to survive, and if economies are to thrive—particularly in a province like the Western Cape where water determines agriculture, technology and tourism—it can no longer rely on a cloud and a prayer to get by.

Corruption and incompetence contribute immeasurably more to water supply problems than the speculative nature of effects of (man-made) climate change, which has become a near-automatic catch-all phrase used carelessly these days. With 71 percent of the planet's surface covered by water, the challenge is simply an engineering problem. Two decades ago Israel depended entirely on rainfall and subsurface water sources; today, half its water comes from desalination plants.