Where is our regard for the sanctity of life in Yemen? 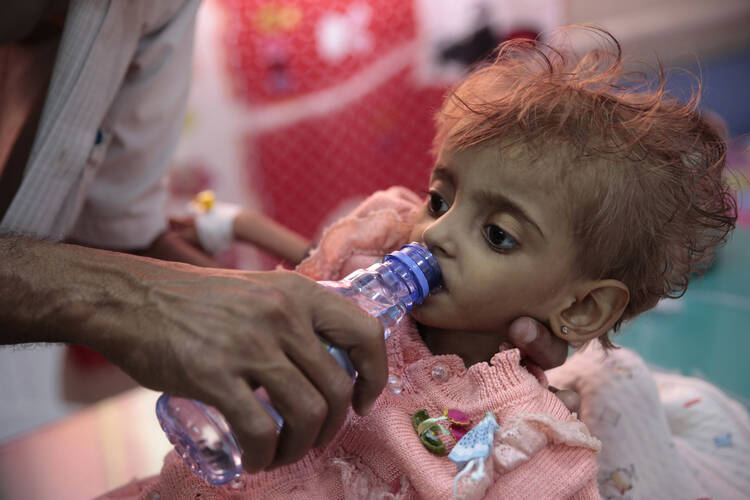 A father gives water to his malnourished daughter at a feeding center in a hospital in Hodeida, Yemen, on Sept. 27. (AP Photo/Hani Mohammed, File)

Who are the “worthy victims” of our world, the ones who deserve our attention, our compassion, our empathy and our action? Children are now dying in Yemen as a result of a Saudi-led war effort aided by our government. Considering that this has gone on for some time, it is hard to avoid the conclusion that Americans either do not care or find this acceptable.

But after the appalling murder of Washington Post journalist and U.S. resident Jamal Khashoggi in the Saudi consulate in Istanbul, our relationship with Saudi Arabia has come under new scrutiny. For decades, the United States has maintained an alliance with that nation because of our demand for Saudi oil and our appreciation for a friend, even if an unreliable one, in a tumultuous region. Economic and national security interests have long led the United States to overlook egregious human rights violations in Saudi Arabia. Now the current crown prince, Mohammed bin Salman, has portrayed himself as a reformer and has led a charm campaign in pursuit of even more U.S. investment in his country.

Foreign alliances always involve compromise; to have any foreign policy necessarily requires a willingness to cooperate with suboptimal, often unsavory and even corrupt leaders in order to accomplish broader strategic goals.

But followers of Jesus must not turn our eyes away from what is occurring in Yemen and the war crimes that our country is enabling and even profiting from as a result of arms sales to Saudi Arabia. This summer the Saudi coalition used weapons supplied by the United States on at least two occasions to kill dozens of innocent children. In one of these instances, sky-blue Unicef backpacks were strewn across the ground afterward, covered in dirt and the blood of the children whose school bus was bombed by air forces that benefited from refueling and intelligence support from the United States.

The devastation of the war upon Yemen has reached an almost incomprehensible and utterly dire magnitude; the United Nations warned on Oct. 23 that the famine in Yemen is the worst in 100 years, with 14 million people at risk of starvation. The World Health Organization reports that 10,000 cases of cholera are reported per week, clean drinking water has become scarce for millions, and Yemen’s medical care system is on the verge of a total collapse, creating a dire situation for cancer patients, the elderly, persons with intellectual and physical disabilities, and those in need of surgery and medical service of any kind.

The devastation of the war upon Yemen has reached an almost incomprehensible magnitude; the United Nations has warned that 14 million are at risk of starvation.

It is tempting to shield our eyes from horrifying images of gaunt, starved Yemeni children dying in their mothers’ arms, both reduced to unrecognizable skeletons. Either we are too distracted to be aware in the first place or we look away from such horror to the distractions provided by our comparatively unfathomable wealth. But the blood of Yemeni children demands justice.

Moreover, the pro-life community in the United States has shown little regard for the sanctity of life in Yemen and Saudi Arabia, whether it comes to the drone attacks in Yemen that started under the Obama administration or the murder of Mr. Khashoggi.

The consequences of selling arms to Saudi Arabia
The Editors

When Jesus of Nazareth was asked, “What is the greatest commandment?” he answered that we are to love God and neighbor, to which a listener responded, “And who is my neighbor?” It is not simply that the priests and Levites of the United States are leaving Yemeni children to die on the side of the Jericho highway; in fact, we are the bandits assaulting these children.

The complexities of U.S. foreign policy should not be oversimplified. Nonetheless, it is difficult to avoid the conclusion thatthe United States could end the war in Yemen if we wanted to. We have the opportunity for an unmasking about the state of our true selves. How do we regard the sanctity of life in Yemen? Union with the crucified Messiah from Nazareth necessitates a refusal to shrug, “Who is my neighbor?” in response to his call to love. We must not accept the current state of affairs as expediently acceptable or nihilistically inevitable. The people of God have the theological resources for imagining better, more just relations between our government and the most vulnerable humans on earth. Will we do so?

We must speak out. The children of Yemen need an advocate. Even if a break with Saudi Arabia costs us financially, those who are co-crucified with Christ belong to a different economy than that of the earthly world concerning the price of life.

You are not our own. You were bought with a price. So glorify God with your body. 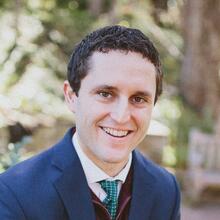 Joshua Heavin is a Ph.D. candidate in New Testament theology at the University of Aberdeen, in Scotland.

The essay is chaotic and since the author does not want to read too much about the war and the players involved, he soon pans to the murder of the Washington Post journalist by the Saudis so that he can raise the heat on the Saudis in that area. There is an insurgent war in Yemen by the Houthi rebels who are Shiite (not mentioned) receiving arms from Iran (not mentioned) and knowing the Islamic belief in Taqiya (lying in some areas of life to save one's life), it is not hard to imagine the Saudis thinking that a school bus was being used to transport weapons much like UN schools were used to store Hamas missiles in Palestinian areas of Israel. That is...tons of questions are not addressed by the author and as a result, we have one more Catholic writer wanting people to feel guilty while providing scant info on the very war he is fulminating about. This is a genre of writing that is weird. Why not tell the reader that the real conflict in Yemen is Sunni versus Shiite....that food is arriving at the ports but weapons are arriving also and explore whether the Saudis understandably see food and weapons being mixed just as Hamas mixed missiles with schools in Palestinian areas. Unforetunately both Sunni and Shiite are capable of using civilian settings like a port to not only feed people but to transport weapons within civilian vehicles or settings. There is no easy solution. The Saudis are at least supporting the government which was most recently in place...unless the author thinks rebellion per se is always superior to established rule. In any event this is bad Christian writing because the author does not even seem to know any player in the war except the Saudis. If the US withdraws arms deals with them...on what basis can the US justify that. IS the US saying that the Shiite rebellion is just and the Saudi support of the most recent regime is unjust? The event is tragic but the author is picking the villain way too quick. He does not know if the Saudi plane had intelligence that munitions were in that school bus...or in a food market...or here or there in civilian settings...because Muslims do that...they shield weapons in civilian venues. It is awful and it leads to awful choices by planes. Was that the problem in Yemen?

Also worth noting that there is great hunger in our own backyard in majority Catholic, Latin America (aka the same people we are demonizing and blocking from seeking safe harbor in America). http://www.fao.org/americas/noticias/ver/en/c/1037375/

This is an rhetoical question, correct?