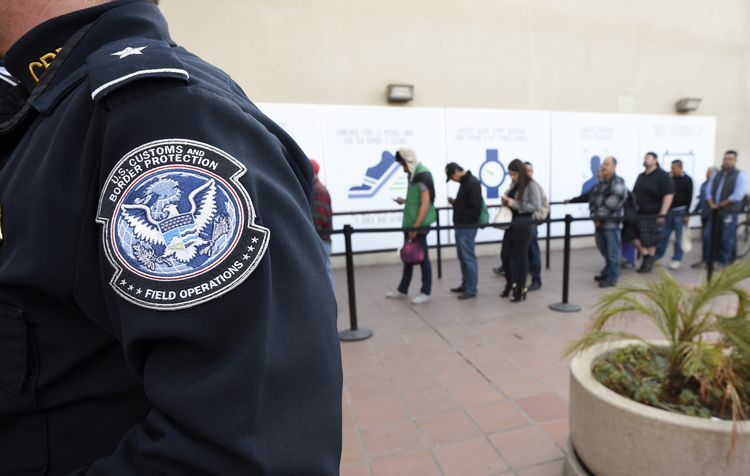 In this Dec. 10, 2015, file photo, pedestrians crossing from Mexico into the United States at the Otay Mesa Port of Entry wait in line in San Diego. (AP Photo/Denis Poroy, File)

U.S. bishops deplored a shift in immigration policy proposed by the Trump administration on Sept. 22 as “harmful to families.” A news release announcing the rule changes says it aims to “clearly define long-standing law to ensure that those seeking to enter and remain in the United States either temporarily or permanently can support themselves financially and will not be reliant on public benefits.”

Bishop Joe Vásquez of Austin, Tex., chair of the U.S. Conference of Catholic Bishops’ Committee on Migration; and Bishop Frank Dewane of Venice, Fla., chair of the Committee on Domestic and Social Development, say the proposed revision “undercuts decades of administrative policies and guidelines on how immigrants are treated by the United States government.”

Federal law has always required those seeking green cards—permits allowing immigrants to live and work permanently in the United States—to prove they will not be a burden to the U.S. government, but it has never previously considered the use of noncash public benefits, such as food stamps or housing vouchers, in its residency decisions.

In a statement released on Sept. 23, the bishops objected to proposals from the Department of Homeland Security that could force millions of immigrants who rely on public assistance for food and shelter to choose between accepting financial help in the form of Medicaid, food stamps, housing vouchers or other forms of public assistance and seeking a green card to live and work legally in the United States.

U.S. bishops: “It appears that this will be very harmful to families, raising fear among immigrant families already struggling to fulfill the American Dream.”

Sister Donna Markham, president and chief executive of Catholic Charities U.S.A., agreed. “Over the past year a half we have seen the status of Dreamer youth put in jeopardy,” she said in a statement released on Sept. 24. “We have witnessed babies separated from their parents at the border. Now we watch legal migrants who followed the rules face possible deportation or non-renewal of their green card merely because they or their sponsor, often an American citizen, lost their job or are working class.”

D.H.S. plans to revise the definition of “public charge” to encompass “current and past receipt of designated public benefits above certain thresholds” as “a heavily weighed negative factor” in the adjudication of immigration cases. According to the U.S. bishops, the revision “further compounds strict eligibility guidelines already in place preventing many immigrants from receiving federal aid.... it appears that this will be very harmful to families, raising fear among immigrant families already struggling to fulfill the American Dream.” The bishops worry the proposed guidelines are “likely to prevent families from accessing important medical and social services vital to public health and welfare.”

Homeland Security Secretary Kirstjen Nielsen said the new rule is intended to “promote immigrant self-sufficiency and protect public resources by ensuring that immigrants are not likely to become burdens on U.S. taxpayers.” The administration estimated that the rule would affect about 382,000 immigrants who work low-wage jobs and use public benefits like food stamps, Medicare and housing assistance. Critics of the rule expect that the announcement will have a “chilling effect” that will spur other immigrants—even green card holders—to stop using public aid.

“The administration has sunk to a new level of cruelty with this proposal to punish immigrants who use government assistance to feed, provide medical care for and house their families.”

The Trump administration announcement follows a string of immigration crackdowns, including the adoption of a zero-tolerance policy that brought criminal charges against migrants who entered the country illegally through the Mexican border and that separated children from their parents.

Jeanne Atkinson, executive director of the Catholic Legal Immigration Network, was blunt in her assessment of the government’s proposed action: “The administration has sunk to a new level of cruelty with this proposal to punish immigrants who use government assistance to feed, provide medical care for and house their families,” she said in a Sept. 24 statement. She called the proposed rule a “cynical tactic, intended to stir anti-immigrant hostility before the November election.”

She also said it was "based on flatly inaccurate assumptions."

“The targets of the proposal are immigrant families, who are no more likely to use publicly funded services than native-born Americans,” she said. “Yet it would force people to choose between obtaining green cards and getting needed assistance to which their families are legally allowed.

“Making families decide between permanent immigration status or ensuring their families have enough to eat is an astonishingly cynical and heartless attack on families for political reasons,” Ms. Atkinson said.

Anti-hunger advocates with Bread for the World also expressed displeasure with the administration’s plans. “If adopted, the health and well-being of 27 million lawful residents in our country will be at risk—including children,” said José García, senior adviser for prayer and evangelical engagement, in a statement released on Sept. 24 by Bread for the World.

“Nearly one quarter of kids in the United States have at least one immigrant parent, and 9 in 10 of these children who would be impacted—most are U.S. citizens,” Mr. García said. “Families of color would also be disproportionately impacted and forced to make the impossible choice of putting food on the table or seeking life-saving health care, and staying together. Millions will go hungry, including farm workers who feed our country.”

The Department of Homeland Security will allow a 60-day comment period once the proposed rule is published in the Federal Register. After that, the administration will take the feedback it receives into consideration in issuing its final rule.

Why don't we wait for the feedback before deploring anything. How will this affect people currently in the country legally? I wish the editors and authors here would state their immigration policy. It seems cowardly not to.

The immigration policy: theoretical admission that a country has a right to enforce a border, even as we "accompany" illegals across it.

You're not here legally. Ask any Native American. You're an illegal immigrant. Let us know when you will self-deport. Most of these immigrants have more claim to a family history of this land than you by centuries.

The law is clear and has been clear since the 1880s: the danger of being a public charge is an excludable ineligibility for a U.S. visa. We have allowed successive administrations to dumb that rule down (e.g., even after Congress demanded an affidavit of support for an immigrant visa after the 1996 IRAIRA reforms, there was never any attempt to determine the credibility of the claims made in them (e.g., verifying the documentation against tax transcripts) or enforcing them in court. So, yes, Americans are tired of paying for people who treat our immigration laws the way Jesuits treat Catholic sexual morality -- a suggestion from which one can dissent. Thankfully, the Trump Administration has wised up.

All the Trump Administration has done was find a way to institutionalize racism.

Trump correctly sees the bishops as his captives. They are his servants, he is their political master. The master does not have to listen to his servants. Whether he was appointed by God to President, as many Catholics believe, or not, he has the bishopsa under his thumb,

You say Trump correctly sees the bishops as his captives. They are his servants,

Paul Being
1 year 6 months ago

The Commission has not laid out the reasoning behind its decision to exclude French ports, but the routing follows concerns about serious congestion in Northern France if customs checks are introduced to cross the English Channel and congestion caused by industrial action by French port workers.

It would seem the bishops have a lot more to deal with than immigration. The government can take care of that. The sexual scandals that are becoming more and more evident need the attention of someone who will investigate this problem that seems so at home in the church. Evidently, a long-held policy sees nothing, hears nothing, and speaks nothing. Cover up after cover up. Better start at home or else the government will be more than happy to do the job for you.