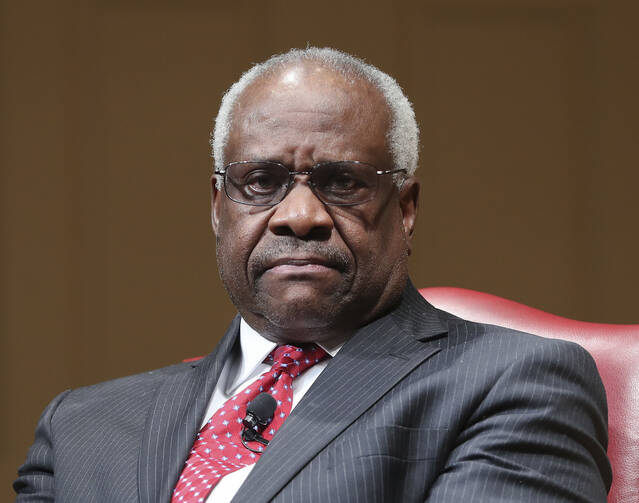 In July 1991, President George H.W. Bush nominated Judge Clarence Thomas to the Supreme Court. By October, allegations of sexual misconduct had thrown the nomination process into disarray. The Senate Judiciary Committee summoned the accuser, an attorney named Anita Hill, to Washington to testify. Broadcast live to an audience of millions, the hearing ignited a firestorm of politics, power dynamics and gender. The ability of television to reach so many Americans stirred Thomas H. Stahel, then executive editor of America, to address the medium's transmission of “sensational and inhumanly accelerated electronic images.”

This article originally appeared in the Nov. 2, 1991 issue of America under the title “Hill v. Thomas.”

We still do not understand how television is affecting our nation’s history. We no sooner recover from one demonstration of television’s elusive but terrible power, as in the controversial 1988 Presidential campaign, than we are overtaken by another such demonstration. All we know is that the Heisenberg principle is at work: The instrument by which we now observe political events also changes them. The two preeminent television events of 1991 have been the Gulf War and the Clarence Thomas/Anita Hill contest. Both these “shows” left network and cable programming in the dust. In the case of the war, Pentagon managers who had been made well aware in Vietnam of television’s ability to alter the war itself determined from the outset to manage the scripts and the lighting. They said frankly they would not “lose” this one in the nation’s living rooms.

The Senate’s managers, untaught by so powerful a lesson as Vietnam—they’ve learned their lesson now—were not intent in keeping a lid on, or in this case a lens cap on, the public hearings of Anita Hill’s charges. Before they knew it, the hearings had migrated, predictably but uncontrollably, into the nation’s living rooms, where the outcome, and political fortunes therefore, were unexpectedly at risk. The charges were uglier than anyone knew, and, under television’s bright lights. Senatorial reactions were neither acute nor dignified. A politician’s nightmare—which gives hope the scenario will not be soon repeated.

Those same unflattering lights revealed other reasons for dismay. For instance, the luxuriant growth of new hearings around the Anita Hill charges was rooted in an unethical disclosure of Ms. Hill’s confidential story. More importantly, lurid light was cast on a new continent: the whole world of sexual harassment, not terra incognita exactly (women know all about it), but still unexplored by men. Senator Barbara Mikulski (D., Md.) said on David Brinkley’s ABC talk show that the hearings were a national “teach-in on sexual harassment.”

That is true. But the nation received an even more fundamental schooling in civics, and more particularly, the kind that could be called “television” civics. The thought question at the end of this lesson: Are our governmental processes being skewed by sensational and inhumanly accelerated electronic images? To put it another way: Can the serious business of electing a President or confirming a Supreme Court nominee be conducted by putting the equivalent of applause meters over the heads of the contestants to see who is more popular or attractive or believable? In this case, we were served up instant televised hearings, followed by instant nationwide polls, followed by instant reports of the polls, which in the event predicted the outcome of the Senate vote. Is the winner of such a process bound to be, not the more thoughtful contestant, but the one with the more artful poses and soundbites?

Is the winner of such a process bound to be, not the more thoughtful contestant, but the one with the more artful poses and soundbites?

Questions of this kind, left behind by the dismal Presidential campaign of 1988, were revived by the hearings, whose superficiality was especially notable in the following:

1. The cliché, spoken with nauseating frequency by Senators and commentators alike, that Anita Hill and Clarence Thomas were both “credible.” This was propounded as if it were a great mystery. The implication was that they were equally credible, a logical absurdity. Some of the Senators who said blandly that Anita Hill was credible went on to attack her, of course.

2. Senatorial demagogy, apparent on both sides but achieving definitive crescendo in the mouth of Orrin Hatch (R., Utah). In a Washington Post column, Mary McGrory reported that one of her friends had a rule during the hearings not to watch Senator Hatch. I know what she meant. I followed the same rule by using the mute on my remote. Luckily, however, I was listening when the Senator from Utah announced with triumph, and not a little suspense, that he had found the sources for “Long Dong Silver” and “the pubic hair on the Coke” in, respectively, another sex harassment case and “page 70 of The Exorcist.” I laughed like Bart Simpson watching “Itchy and Scratchy.”

3. Clarence Thomas’s resourcefulness at playing the electronic game, which ordained that he would win this one. One of his more adept moves gained him real points on my scorecard. This was when he surprised Senator Howell Heflin (D., Ala.) by telling the Senator he had not watched Anita Hill on television; he won the electronic game by saying he refused to play it. Another ploy, claiming he was the subject of a “high-tech lynching,” was bombast, but it put his questioners on the defensive.

An ABC/Washington Post poll taken the night after Judge Thomas’s testimony showed 55 percent inclined to believe him and 34 percent inclined to believe Professor Hill. The same poll indicated that 50 percent thought he should go on the Supreme Court and 28 thought not, with 20 percent undecided or having no opinion. And thus it went two days later, with a Senate confirmation vote of 52 to 48 on Oct. 15.

Meg Greenfield, the acute Newsweek columnist, thinks this sort of hearing could not conceivably have produced the truth. That’s true, absolutely speaking, on the supposition that neither Judge Thomas nor Professor Hill recanted. On the other hand, the hearing need not have proved so inconclusive, practically speaking, if only one or two things had been different—if, for instance, Anita Hill’s witnesses had corroborated even one detail of the grosser material she testified to or if Professor Hill had indeed written a verifiably contemporaneous account of the alleged harassment.

Despite the inconclusiveness of the hearings, the televised debate in the Senate on Oct. 15 provided some noteworthy viewing. Robert Byrd (D., W. Va.), visibly affected by Parkinson's disease, quoted Shakespeare and Milton on his way to announcing a change of mind. He had intended to vote for Judge Thomas but now would not since the benefit of the doubt must go, not to Judge Thomas, but to the Supreme Court. Besides, said Mr. Byrd, “I believed her.” Senator George Mitchell (D., Me.) made an obvious pitch for the pro-abortion vote. Both these speeches, for different reasons, were important to see and hear.

So how would I have voted? If I had already committed myself to vote for Judge Thomas, I could not have changed my vote on the basis of unproven charges. But if I had not committed myself, I would not have voted for him, on grounds like those mentioned by Senator Byrd, that in this case the benefit of doubt need not go to the Judge. The quicksilver world of television should teach the Congress at least this lesson: not to commit oneself too early.

In 1991, Thomas H. Stahel was the executive editor of America.

It was stacked against Thomas by TV. During 1991, I stayed up late to see the news report on the Gulf War. Baghdad was 8 hours different. At midnight the latest news was broadcast. Later I also watched the Thomas hearings. One night near midnight the hearings were still live and they interviewed nearly all the woman on the EEOC with Thomas. Each identified themselves as a Democrat and each said that Thomas was a man of impeccable character. I searched the news the next day and could find nothing on these interviews. The press was controlling the news the public saw back then as they do today.