It’s time for America to find a shared sense of purpose. 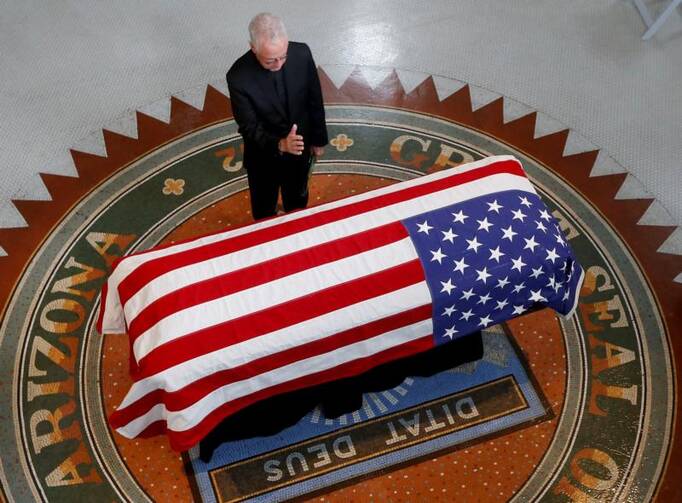 Funerals have a way of bringing out the best and the worst in us, for facing death often prompts us to take stock of life. In times of mourning, we tend to contemplate either the fundamental values of life, or the slights and grievances we too often mistake for them. During the funeral last month of Senator John McCain, we mercifully chose to do the former. The four days of official mourning for Senator McCain were filled with praise for his unwavering patriotism and lifelong belief in the “indispensable mission” of the United States. I often disagreed with John McCain, and I never cast a vote for him. But I always admired him, and I thought he was about as honorable a man as one could meet in public life. I was not alone in that judgment.

“Mr. McCain’s closest friends,” The New York Times reported, “insisted this week that the senator did not harbor a personal grudge toward the president, even at the end. They described him as mostly interested in promoting the cause of bipartisanship and compromise that, as a ‘maverick’ lawmaker, he had carefully fashioned into one of the most durable political brands of the last half-century.” That is true enough, but I suspect that the story of the McCain “brand” made for compelling retelling because it is also America’s story in the years since the Second World War. The United States emerged from the deadliest conflict in human history with the conviction that this nation was a force for right in the world, that we were the new protagonist in the ancient story of good and evil. We had good cause to think so. The American blood that fell on the sands of Normandy and Iwo Jima were ample testimony to our national virtue.

Yet somewhere in that story, the virtue of patriotism yielded to the vice of nationalism and its ideological counterpart, American exceptionalism. In the five decades that followed, while the United States did much that was good in the world, our hubris came to obscure the values that first formed our self-understanding. Misadventures in places like Vietnam and Iraq revealed that the most powerful nation on earth was at times little more than a prisoner in Plato’s famous cave, unable to discern myth from reality. “Having spent their life knowing only shadows,” as one author recently described the cave, “it is revealed to the prisoners that what formed their reality are merely shadows of real objects projected in the light of a fire.”

Such confusion is fertile ground for tilling by demagogues and charlatans. Not a few have reaped a rich harvest. At his inauguration in 2017, President Trump signaled that the quasi-messianic postwar story of America was over. “For many decades,” he said, “we’ve enriched foreign industry at the expense of American industry, subsidized the armies of other countries while allowing for the very sad depletion of our military. We’ve defended other nation’s borders while refusing to defend our own…. From this moment on, it’s going to be America First.”

Don’t get me wrong. America’s national story, the one told in the life of John McCain, was worth celebrating. It was also worth questioning.

But President Trump and the emerging class of neo-isolationists he represents take the national narrative too far in the opposite direction. We needed a course correction, but President Trump has thrown out the map entirely and has taken the United States on an off-road adventure without regard for the passengers in the caravan we were leading. Yes, in the postwar world, the United States too often tried to save the world from itself. But “Make America Great Again” amounts to a national mission to save ourselves from the world. That is also dangerous and morally suspect.

Don’t get me wrong. America’s national story, the one told in the life of John McCain, was worth celebrating. It was also worth questioning.

“The things that we love,” St. Thomas Aquinas wrote, “tell us who we are.” Throughout our long history, this country has professed—and lived imperfectly—a love of freedom, democracy and human innovation. True love opens hearts, orients them outward toward the good of the other. In other words, if those are the things we love, then we should have the motivation—and we certainly have the duty—to help the world to grow in freedom, democracy and innovation.

We are not the indispensable nation. We never were. But a shared sense of national purpose is indispensable. We can be a light for the nations, but not if our only concern is keeping our own lights on. If our only national interest is now self-preservation, then we have abandoned the principles we once claimed to champion; and the national story John McCain helped to write is, in the words of Yeats, little more than “ash that chokes the fire.”

We had one but it was dismantled by Americans Left and Right. We used to be proud as a nation who believed in God. Since Chief Justice Earl Warren removed God from our national ethos, it has been downhill sense. Without God as our center we are lost as a nation.

“America will never be destroyed from the outside. If we falter and lose our freedoms, it will be because we destroyed ourselves.”