Could Canada be the next country with a right-wing populist insurgency? 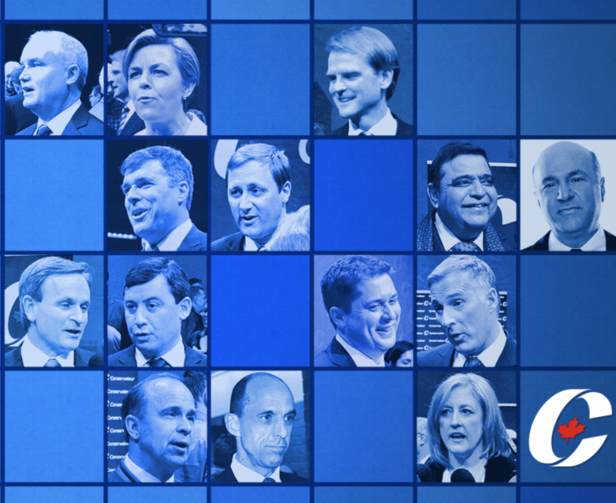 The 14 candidates for leader of the Conservative Party of Canada are featured on the party's website, with Kellie Leitch in the middle of the first row and Kevin O'Leary at the end of the second row.

In less than two months, Canada could make its contribution to the wave of right-leaning populist politics sweeping the world—even with a prime minister, Justin Trudeau, who was held up by outgoing U.S. Vice President Joe Biden as an exemplar of liberalism. Fourteen candidates will face members of the Conservative Party of Canada in a leadership election slated for May 27. (Stephen Harper, who led the party for 11 years, resigned after losing Canada’s 2015 federal election to Justin Trudeau.) Among them are Kellie Leitch, who made headlines for her suggestion that Canada should screen refugees for “Canadian values” and for her former campaign manager’s role in disseminating “fake news,” and Kevin O’Leary, an entrepreneur with a history of right-wing rhetoric, who has appeared on the reality-TV show "Shark Tank"in the U.S. and on its Canadian sibling, "Dragon’s Den."

Mr. O’Leary, who has praised U.S. President Donald J. Trump (at least before Trump took office), has emerged as one of the frontrunners in the race, along with a more established candidate, Parliament member Maxime Bernier. Mr. O’Leary is doing well despite entering later than most candidates, and while Ms. Leitch is farther behind, polling suggests that most Canadians support her “Canadian values” screening. As a response, some Canadians have devised a strategy for keeping more right-wing candidates out of leadership: registering as members of the C.P.C. to vote in the leadership election (the deadline to register is March 28), despite never voting Conservative before, and in many cases not identifying as Conservatives themselves.

Elliot Coombe, a swing voter who says he has voted for the Liberal and the New Democratic parties but never for the Conservatives, made an appeal for this strategy in a popular blog post, urging progressive millennials to join the C.P.C. and vote for more moderate candidates. Mr. Coombe has advocated for the C.P.C. candidate Michael Chong in particular, a longshot whom Mr. Coombe calls “a principled [member of Parliament] who puts his values, like environmental protection and multiculturalism, ahead of political expediency. That’s the sort of person who should be leading the party, and I put my article out there to see if anyone agreed with me.” Mr. Coombe says he has received a lot of support from around the country.

The voting strategy is “not a cure-all for stopping the alt-right in Canada,” but Coombe thinks it could be an important step.

The election of Mr. Trump in the United States partly motivated Mr. Coombe’s proposal. “I hope our political leaders will stop using the sort of bigoted, pseudo-populist, alt-right rhetoric that has been moving white nationalism from the fringes to the mainstream. People are literally being gunned down over it, and as concerned citizens, we have a responsibility to stand up for each other,” Mr. Coombe says. For example, the gunman at a January mosque shooting in Quebec, Alexandre Bissonette, reportedly identified with far-right politics and political figures like Mr. Trump and French politician Marine Le Pen. Mr. Coombe says the voting strategy is “not a cure-all for stopping the alt-right in Canada,” but he thinks it could be an important step.

These sentiments are echoed by Carolyn Mackie, a Toronto resident from British Columbia. “I definitely don’t want Leitch or O’Leary,” she says, noting that she intends to place them at the bottom of the ranked ballot in May. Ms. Mackie does not identify as a Conservative, but she joined the party after seeing a friend ask on Facebook, “How much would you have been willing to spend to avoid having Donald Trump as the Republican nominee?” At a cost of $15, the fee to join the C.P.C. is not especially prohibitive. At the same time, Ms. Mackie says she wrestled with joining the Conservatives, since she did not historically share the party’s values. “I’m slightly embarrassed about it,” she admits. “All the people in my building will see the mail in my mailbox!”

“How much would you have been willing to spend to avoid having Donald Trump as the Republican nominee?”

Ms. Mackie says she has been pleasantly surprised by the lessons learned over the course of her brief party membership. When submitting for membership, she says, “you tick a box saying you have read, or align yourself, with the founding principles of the Conservative Party. I was sort of taken aback, like, wow, they actually want my integrity!... Apparently they don’t just want my money.” Although she has voted in previous elections, Ms. Mackie says the extent of her identification with a specific political party before now amounted to “liking” the Green Party on Facebook.

Some Canadians are also taking advantage of a loophole permitting them to join the C.P.C. even if they are already members of other federal parties. Though the C.P.C. itself forbids this, it would be very difficult to prove multiple party memberships, since parties guard their membership data.

But Ms. Mackie says she intends to honor her one-year membership commitment to the C.P.C. “I think I would not feel right about joining another party while that membership is in place,” she says. “This is just an unusual thing for me because I feel strongly that I don’t want certain people to be in leadership.” Ms. Mackie also says she is not sure if she will join a party again, or renew her C.P.C. membership, after her current membership expires.

Joining the C.P.C. has also been a way for some first-time party members to enter into a dialogue with Canadians they might not otherwise agree with. “After the American election, part of the big concern was that Democrats didn’t understand why someone would vote for Trump,” says Caleb Ratzlaff, a resident of a small town in southern Ontario. “There was no empathy there. I joined because I was interested in understanding how each candidate framed themselves, and thought that would be a good way to understand conservatives.”

What hopes are there for U.S. electoral reform if Canada has given up?
The Editors

Mr. Ratzlaff also says joining the C.P.C. is a good way to understand his friends, many of whom are Conservatives. Even though he supports the New Democratic Party and is open to registering in that party to vote in its upcoming leadership election to be held in October, the C.P.C. is the first party Mr. Ratzlaff has joined.

Whatever the outcome of the C.P.C. election, the prospect of a Canadian populism has inspired a new generation of Canadian voters to get involved for the first time in the institutional process of party politics, even though many of those voters are at odds with significant stances of the party they joined. Whether or not there will be enough new members to offset the popularity of candidates like Mr. O’Leary and Ms. Leitch, the possibility of those candidates has encouraged young Canadians to reach out to their neighbors and take a closer look at the Canadian political process.