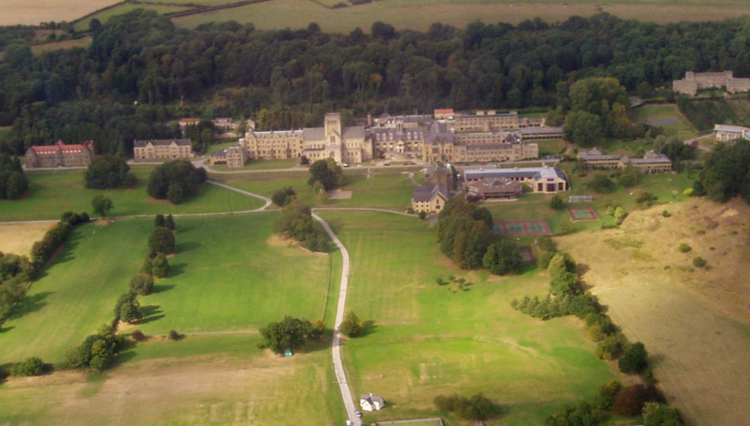 Ampleforth and the Valley from the air. (Wikimedia Commons)

LONDON (AP) — A British inquiry concluded Thursday that sexual abuse at two leading Roman Catholic schools in England was considerably higher than is reflected by conviction figures, with monks hiding allegations to protect the church's reputation.

The Independent Inquiry into Child Sexual Abuse issued a scathing report saying that monks at Ampleforth in northern England and Downside in the southwest hid allegations of "appalling sexual abuse" against pupils as young as 7. Ten people linked to the schools have been cautioned over or convicted of sexual activity or pornography offenses involving a "large number of children."

"The true scale of the abuse however is likely to be considerably higher," said inquiry chair Alexis Jay.

Ampleforth accepted responsibility for past failures and thanked Jay for her work.

"We would also like to once again offer our heartfelt apology to anyone who suffered abuse while in the care of our schools, parishes or other ministries," it said in a statement.

Downside offered a “sincere and unreserved apology to all victims and survivors of sexual abuse.”

Downside offered a "sincere and unreserved apology to all victims and survivors of sexual abuse."

"We have reflected deeply and will continue to listen with the ear of the heart going forward to ensure that the mistakes of the past are never repeated," the school said.

The schools, linked to the English Benedictine Congregation, were run at times by "secretive, evasive and suspicious" officials who avoided reporting misconduct, Jay said. Instead of informing authorities, church leaders confined suspected abusers to the abbey or sent them away to other locations where a history of predatory behavior wasn't always disclosed — and children were abused as a consequence, the report said.

"For decades Ampleforth and Downside tried to avoid giving any information about child sexual abuse to police and social services," Jay said. "Instead, monks in both institutions were very often secretive, evasive and suspicious of anyone outside the English Benedictine Congregation. Safeguarding children was less important than the reputation of the church and the wellbeing of the abusive monks."

“For decades Ampleforth and Downside tried to avoid giving any information about child sexual abuse to police and social services.”

Though the allegations stretched back to the 1960s, recent incidents cast doubt on whether church officials had gotten the message about reporting such activity to the police and social services. The report followed several weeks of evidence delivered to the inquiry last year.

Christopher Jamison, abbot president of the English Benedictine Congregation, acknowledged that the report "highlights how flawed many of our past responses have been. "

He said the institution would "work conscientiously to ensure our communities are safe environments for young people both now and in the future."

The inquiry was organized following the 2011 death of entertainer Jimmy Savile, after which dozens came forward to say he had abused them. Subsequent revelations have implicated entertainers, clergy and senior politicians

The church is one of 13 institutions being scrutinized by the inquiry for child-protection failings.

this English Inquiry follows a pattern of National Investigations of clergy abuse already established in Ireland, Northern Ireland, Scotland, Australia, and several European countries. The only country without a National Inquiry is the USA. And if you read the apologies offered by nuns, brothers, priests, bishops, in all of these countries--guess what?--they are all reading from the same script! Abbot Jamison offers the same mealy mouthed apology that dozens have offered before him. We need a Henry VIII solution--confiscate all the lands and properties of these convents and monasteries, and require all the inhabitants to register as sex offenders. Downside and Ampleforth are classic old elite Catholic schools catering to the wealthy, and follow the same pattern of abuse that the Boston Globe Spotlight team found in old, established private schools in New England (like St Paul's in NH)--
https://www.bostonglobe.com/metro/2016/05/06/private-schools-painful-secrets/OaRI9PFpRnCTJxCzko5hkN/story.html
-- wasn't it Willie Sutton who was asked why he robbed banks, and replied: "cos that's where the money is!"
So why do so many pedophiles end up in private schools?--cos that's where the children are!