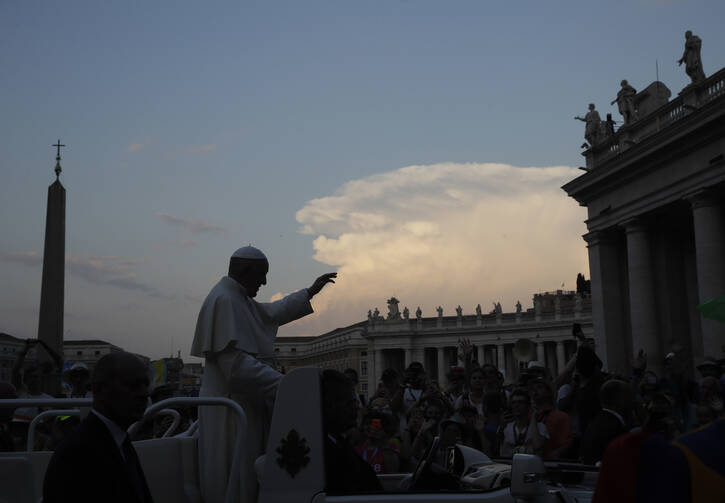 Pope Francis salutes as he leaves after an audience to altar aids, in St. Peter's square at the Vatican, Tuesday, July 31, 2018. (AP Photo/Alessandra Tarantino)

VATICAN CITY (AP) — A new survey has found that the majority of U.S. Catholic religious orders believe women should be allowed to serve as ordained deacons, lending support to an issue currently under study at the Vatican amid pressure for women to be given greater roles in the church.

Seventy-seven percent of both male and female superiors in the U.S. believe such ordination is theoretically possible, and 72 percent think the church should go ahead and authorize it, according to the study released Thursday by the Center for Applied Research in the Apostolate at Georgetown University in Washington.

Only 45 percent, however, believe the church will actually do it, the study found.

Why Not Women? A bishop makes a case for expanding the diaconate.
Emil A. Wcela

Deacons are ordained ministers, not priests, though they can perform many of the same functions as priests. They preside at weddings, baptisms and funerals, and they can preach. They cannot celebrate Mass.

Currently, married men can serve as deacons. Women cannot, though historians say women served as deacons in the early church.

Advocates for expanding the ministry to include women say doing so would provide women with greater role in the ministry and governance of the church, while also helping address the effects of the Catholic priest shortage in parts of the world by allowing women to perform some priestly functions.

Francis did, however, authorize the creation of a commission to study the role of women deacons in the early church in 2016, responding to a request from the International Union of Superior's General, the Rome-based association representing the leadership of the world's women's religious orders.

The commission's work has been shrouded in secrecy and it's not clear if or when its findings will be made public.

In the meantime, the church is pressing ahead with the issue. A recent preparatory document for the Vatican's 2019 summit of bishops on the Amazon called for church leaders to identify new "official ministries" for women to play in the Amazon, which has been afflicted by an acute shortage of priests.

That suggests that the diaconate for women could be on the table at the meeting, though there are other "lay" ministries open to women as well.

The CARA survey of U.S. religious orders was conducted from January-May and had a margin of error of plus or minus 3.55 percentage points. About half of the 777 religious superiors replied to written questions and follow-up from researchers. The center said the 385 responses it did receive "strongly resemble" the overall pool of potential respondents.

Seventy-seven percent of both male and female superiors in the U.S. believe ordaining women as deacons is theoretically possible, and 72 percent think the church should go ahead and authorize it.

From the start of his pontificate, Francis has insisted that women must have a greater role in the life of the church and greater say in its decision-making — while reaffirming that they cannot be priests. He has said repeatedly that he values the "feminine genius," that there's no reason why a woman couldn't head certain Vatican offices and that the church hierarchy would do well to hear more from women's perspectives.

But history's first Latin American pope has also hit a few sour notes with women, calling Europe an infertile "grandmother," urging nuns not to be "old maids" and once calling new female members of the world's leading theological commission "strawberries on the cake."

There are no women among Francis' senior advisers.

Phyllis Zagano, a member of the Vatican's commission, has written that much of the criticism and confusion over women deacons stems from ignorance about the distinctly separate ministries of priest and deacon, and the erroneous belief that those advocating for women deacons have a secret agenda to ordain women as priests.

"We know today that married deacons are not eligible for priesthood. Neither would women deacons be eligible," Zagano wrote in a February article for U.S. Catholic magazine. "To deny the people of God the ordained ministry of women deacons is a serious failing that the church in the west has lived with for 800 years."

Additionally, married women should be able to be deacons. One of the primary areas that women deacons need to address is married life and sexuality. In order to effectively speak about married life, a woman needs to have lived it.

We need women deacons, women priests, and women bishops. Gender balance in the hierarchy is the only way to mitigate the sexual abuse crisis. The church is "one, holy, catholic, and apostolic," but not necessarily patriarchal. Would Jesus today call 12 males to represent the patriarchs of the 12 tribes of Israel?