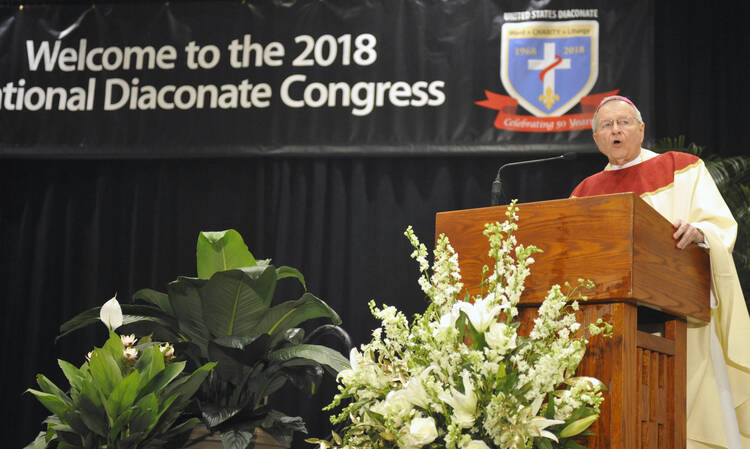 The 2018 Diaconate Congress, held in New Orleans from July 22 through 26, celebrated the 50th anniversary of the renewal of the Order of Diaconate as a permanent ordained ministry of the Catholic Church in the United States. “Permanent Deacons have shown themselves to be able co-workers with their bishops, priests, and the lay faithful in many dimensions of ecclesial life,” wrote Archbishop Christophe Pierre, the Apostolic Nuncio to the United States, in his letter of congratulations to the Congress, “including apostolic works; sacramental preparation; administrative and financial matters; hospital and prison chaplaincy; and in many other important ministries… making God’s love known through humble service.”

In his homily for the opening Mass of the Congress, New Orleans Archbishop Aymond called permanent deacons the "conscience" of the church, reminding them of the need to reach out those who are poor or disenfranchised.

Over the past half-century, the number of permanent deacons in the U.S. Catholic Church has steadily grown, to more than 18,000 (see chart below), providing support to parishes during a period of decline in the number of ordained priests. This data comes from the Center for Applied Research in the Apostolate, which this year published an exhaustive study of the duties, characteristics and opinions of U.S. deacons, titled “Word, Liturgy, Charity: The Diaconate in the U.S. Catholic Church, 1968–2018.” The infographic below draws from that study, as well as from CARA’s data on current enrollment in diaconate formation programs.

Infographic sources: Frequently Requested Church Statistics, Center for Applied Research in the Apostolate; 2017 survey of 3,166 deacons in the United States, as reported in Word, Liturgy, Charity: The Diaconate in the U. S. Catholic Church, 1968-2018, CARA (compensated ministry positions include director of religious education, director of liturgy, and youth minister); “Catholic Ministry Formation Enrollment: Statistical Overview for 2017-2018,” CARA; America/CARA women’s survey of 1,508 Catholic women in the U.S., reported in Jan. 16 issue. 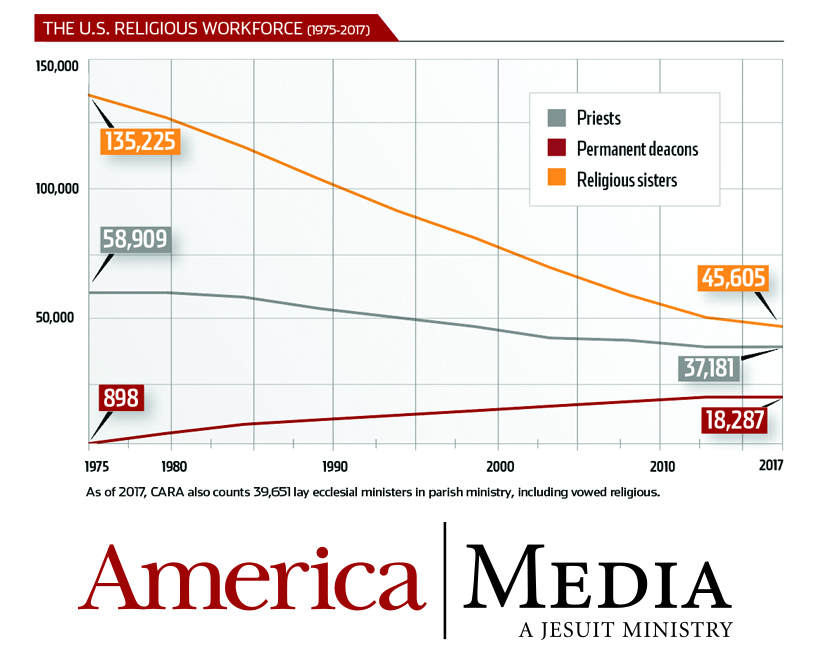 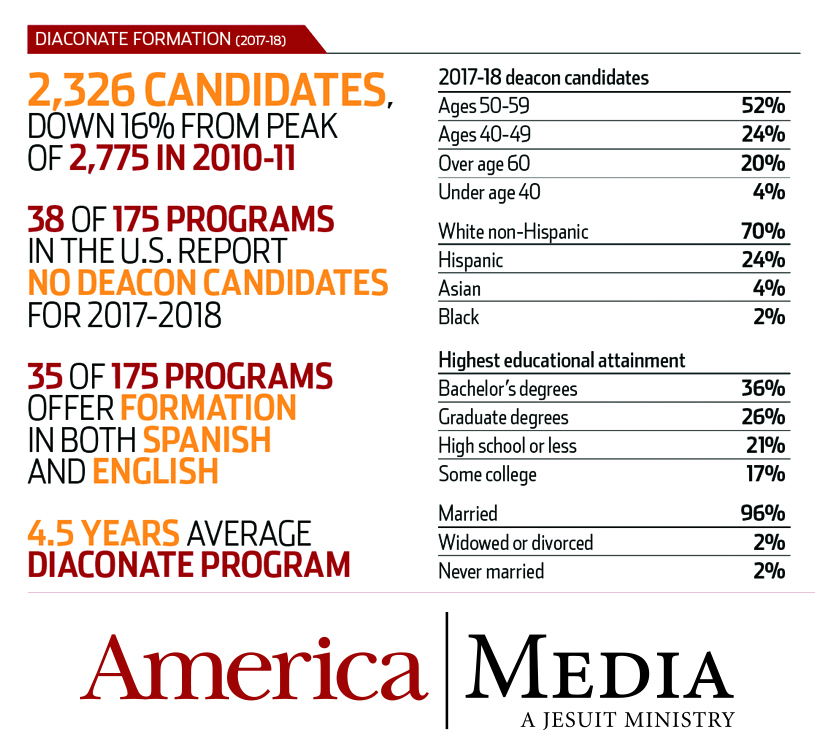 I realize the following comment may seem quite harsh to many but sometimes harshness is necessary to make people wake up to the harm they are supporting. Nothing below is false or exaggerated.

Make no mistake my fellow sisters and brothers in Christ, the above stats are a bit of a propaganda, pro-deacon, initiative by this writer. Why do I claim this?
1. Because the above information is just the American Deaconate stats. - the global stats are much whiter and far less Hispanic in proportion - try 90% white non-hispanic - so race, ethnicity, home country, and gender are very important if you want to be a deacon. In fact, even the American stats. above prove that if you consider Hispanic Americans to be white or Caucasian, as most Hispanic Americans do consider themselves to be, then even the American stats have us at over 90% white race content for our deaconate, nationally.
2. If you look at the percentage of divorced or widowed deacons you get that gushy feeling - Wow! so few have cheated on or divorced their wives and, Wow! these guy's wives must be unusually healthy - extra blessings - right? Umm. No. - Not quite - not at all.
You see what the stats. above are hiding is that when a deacon re-marries after divorce or if his wife dies he can't remain a deacon. After divorce or death of spouse, a deacon can only remain a deacon if he remains celibate. This is a part of his vows which he promises when he gets ordained-if he loses his wife he will remain celibate from that point on. However, most deacons after they divorce or their wives die don't even wait 3 years to break this vow, or before asking to be laicized so they can re-marry. That dicey stat. last I checked, in 2017, was upwards of 70% of all permanent deacons per the church's own records seek to be laicized to remarry once they divorce or lose their wife within 3 years of losing their spouse . This means the stats. above reflect only active deacons who are divorced or whose wives died who kept their celibacy vow and did not remarry or remarry yet. So dump that gushy feeling folks and come to realize that what the stats. really tell us is that the vast majority of deacons were never serious about the sacrifice they vowed to make which was required for them to become deacons. They just lied to get the prestige that ordination offers to only men, to gain the advantages ordination gives deacons over the rest of us unworthy lay nothings.

Much of the rest of this comment I just copied and pasted from the comment I put on the other recent article on this subject.

Below is the truth:
This ministry is harmful to the church and has been from the start for those who care to know the truth. What deacons do now, can and should be done by lay people instead, as that has proven to be best for parishes, in case anyone is interested in the health of parishes instead of what will most ego boost married Catholic Men.

The diaconate should just be done away with. It is currently over 90% consisting of white, middle class to wealthy, western men on a global scale and this percentage has existed for over 40 years. These kinds of statistics are never accidental, when they exist for decades, which means there is a real negative intent in continuing this ministry while we know what these stats. indicate.

The ministry pushes the idea that men are more sacred than women since we don't ordain women deacons. It pushes an ultra-conservative, sexist version of both marriage, and Catholicism which is why the deacons we have will not, as a group, even stand up for the wives, daughters, sisters and mothers they supposedly love, to be ordained deacons like themselves.

Deacons, perhaps unintentionally, often suffocate the desire for lay men and lay women to lead in their parishes as all available leadership roles are given to them automatically. This creates less active parishes and that has already been proven.

We need to discontinue this ministry as it is completely unnecessary (in country's that can't afford a deaconate program, lay women and men do all the things that deacons do in the west, including all sacramental work) but mostly because the mere statistics I already gave above have proved this ministry to have supported sexism (blatently), clericalism, racism, ethnic bias, and wealth bias on a global scale for decades. Since it has only been available for several decades this is quite telling.

I am not surprised the women in the other recent article in America (yesterday) who has had a family with many broken marriages is shoved a conservative - worship Mary instead of Jesus type routine for her life and marriage - as that is what deacons like to preach. Women have babies and shut up in church while the manly .. men ..men do the enjoyable ministries of preaching, lectoring, officiating at weddings and funerals and performing baptisms all the while being admired and respected as so much more than other married men and all women while they do.

Just let us face the fact the ministry is self-destructive to the church and harmful and put it back in hibernation where it was for 100s of years - with no ill effect on the church. I believe that is pretty much the best definition of unnecessary - No one missed you for hundreds of years and won't miss you if you are gone for countless hundreds more.

I pray for the day this church can hear the truth about itself and convert its heart away from self-destructive actions and laws as Jesus would have it do. Sadly, that day has not yet arrived.

All of what you said makes absolutely no sense whatsoever and, instead, comes across as some kind of perverted sour grapes. It is an opinion that is based on no facts--not one! You make declarative statements as though they are proven, so please provide the proof. Otherwise, get over yourself!

As a permanent deacon I would like to share my perspective on the diaconate. Unfortunately, we tend to have a conversation regarding the ordination of women to the diaconate from the perspective of equality rather than theology. There is nothing a deacon can do sacramentaly that a lay person can’t do as well. For a lay person to baptise, witness a marriage, lead a communion service or conduct a funeral outside of a Mass they must get permission from their local ordinary or bishop. Deacons are delegated permission by virtue of their ordination but still must be extended faculties or privileges to participate in these rites routinely by their bishop. The other difference is that we minister publicly. In other words, by virtue of our ordination, we perform ministry in a public way and as such represent the larger institutional Church. That is why we take a vow of obedience to our bishop. When lay ministers function they do so in a private sense, not representing the Church in a public way. As far as preaching the homily, there are some diocese in the US where deacons are NOT given the faculties to preach during Mass. This is the exception though and the permission to preach is a privilege also imparted by the celebrant of the Mass as well. Under present canon law the ordination of women to the diaconate would not give them any additional authority in church hierarchy. That will not eliminate clericalism. Progress can be made by opening additional lay leadership roles to women not only on the diocesan level but within the Vatican as well. Pope Francis has begun that process already. Women have also been appointed chancellors in dioceses in the US as well. There are profound theological questions that must be addressed related to the spousal analogy of Jesus and the Church before women can be ordained. St. Pope John Paul II closed the question of priestly ordination of women by stating the Church did not have the authority to do so for these theological issues. This is not a question of equality between men and women but our ontological roles imparted in God’s creation. I am no less a human person because I can not get pregnant and deliver a baby. The question of addressing the leadership role of women within the Church simply will not be addressed through ordination. Women should be encouraged and need to be appointed to lay leadership positions at the parish and diocesan level as well as within the Vatican. Only when they are in these positions will a true structural equality be achieved. But this will not address clericalism. That is a separate issue that is more a crisis of vocation than a measure of inequality.
Deacon Steve Dove