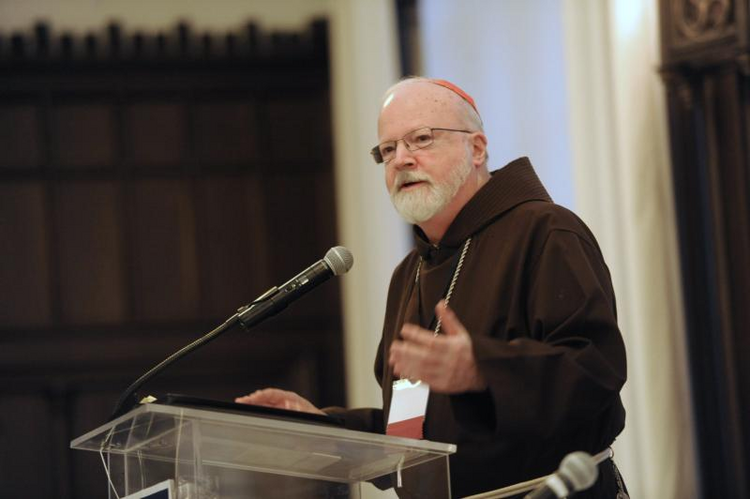 BOSTON (CNS) -- Boston Cardinal Sean P. O'Malley called for "three specific actions" to immediately address allegations of sexual abuse of minors and "sexual improprieties" with seminarians made against Cardinal Theodore E. McCarrick, starting with "a fair and rapid adjudication of these accusations."

Second, there must be "an assessment of the adequacy of our standards and policies in the church at every level, and especially in the case of bishops," he said in a statement issued late July 24. "And third, communicating more clearly to the Catholic faithful and to all victims the process for reporting allegations against bishops and cardinals."

"Failure to take these actions will threaten and endanger the already weakened moral authority of the church and can destroy the trust required for the church to minister to Catholics and have a meaningful role in the wider civil society," Cardinal O'Malley said.

The cardinal, who is president of the Pontifical Commission for the Protection of Minors, issued the statement in response to articles in the national media over the past several days that "have reported accusations of Cardinal Theodore McCarrick's sexual improprieties with several adults and his criminal violations of the sexual abuse of minors."

In late June, Cardinal McCarrick, the 88-year-old retired archbishop of Washington, said he would no longer exercise any public ministry "in obedience" to the Vatican after an allegation he abused a teenager 47 years ago in the Archdiocese of New York was found credible. The cardinal has said he is innocent.

Cardinal O'Malley added: "In this moment there is no greater imperative for the church than to hold itself accountable to address these matters, which I will bring to my upcoming meetings with the Holy See with great urgency and concern."

Time for tougher words and actions. As we know from Matthew 18, when it comes to harming kids, even Jesus lost his cool. Tying a milestone around the perpetrators neck and drowning the scumbag into the deep sea, sounds a bit harsher than "morally unacceptable".

Sorry, Cardinal O'Malley, you're - what? 20 years too late?
Isn't this a clear case of"power corrupts, absolute power corrupts absolutely."
I can only suggest we just throw the bums out.

The Cardinal McCarrick scandal is another example of the homosexual nature of the sexual abuse scandal in the Catholic Church, where it has already been pointed out by the John Jay Church sponsored study that 81% of the alleged victims have been male; and until this homosexual role in the abuse scandal is acknowledged and rooted out, there will continue to be sex abuse problems in the Church.

So Cardinal O’Malley’s call for tougher standards “especially for bishops” on sex abuse is all well and good. But if that’s all that happens, it’s like putting a band aid on cancer and expecting a cure.

As Bill Donohue, president of the Catholic League wrote recently:

“Any honest observer of the priestly sexual abuse scandal knows that the lion’s share of the molestation was committed by homosexuals, not pedophiles….

“This is not a plea for punishing homosexual priests. It is a plea to abide by the policy adopted by Pope Benedict XVI: men with ‘deep-seated homosexual tendencies should not be welcomed in the seminaries’….

“Pope Francis picked up on this discussion, strongly backing the position of his predecessor….’These tendencies, when they are ‘deeply-rooted,’ and the practice of homosexual acts, can compromise the life of the seminary beyond that of the young man himself….”

Donohue further refutes the liberal canard that homophobia causes homosexual men to become predators: “Blaming ‘homophobia’ is a dodge. It is employed as justification for recreating the very milieu that created the problem in the first place.”

I'm am imperfect Catholic who's gay and who years ago had sex with men. However, I regretted my acts, and received forgiveness and consolation from a compassionate priest through the Sacrament of Reconciliation. I agree that any member of the clergy who sexually abused or rapes minors, when allegations are found to be credible, should be defrocked/laicized and when a crime has been committed be imprisoned. I agree with the conclusion of the John Jay study that the overwhelming majority of victims of clergy abuse were male. With due respect to concerned people with different views, I don't believe that gay people such as me should be unfairly demonized. But I don't believe that men with deep rooted homosexual inclinations should be admitted to any seminary. Years ago, a priest who was one of my theology teachers in high school got an adolescent intoxicated and raped him. How despicable. Fortunately, the priest was convicted of a crime and imprisoned, which was just. Any decent person regardless of sexual orientation, gender, race or religion is (or should be) appalled by such horrendous immoral and/or criminal behavior. Frankly, I don't know what the procedure is to report a bishop or cardinal who commits sexual abuse either of innocent seminarians and crimes against minors such as Cardinal McCarrick allegedly committed is. If found to be guilty, Cardinal McCarrick must be made a layman and imprisoned. Although this tremendously shameful behavior has been sadly going on for many years,I believe that the leaders of our Church have attempted in good faith to protect children from harm. Of course, it's tragic that there are some bishops and cardinals who are notable exceptions. Cardinal O'Malley and others given authority to implement plans to protect minors should do all in their power to achieve that end. I simply don't have the "expertise" to know what the best procedure for lay women and men should/must be to report instances of bishops and cardinals committing sexual abuse, and to whom such incidents should be reported. Shame on the small number of clergy who have violated their boss of celibacy and have sexually abused or raped innocent people. I would like to end by commending the many holy priests, bishops, and cardinals who have kept their vows of chastity and are serving both our Lord and their flocks with love and dedication.